Jeff Jamieson is still waiting for someone to mistakenly hang a coat on one of his wall sculptures.

The diminutive yet precise structures, alongside the still life paintings of Jeff’s brother Dalton Jamieson, make up the joint show “More is More,” currently hanging at the Cuesta College Art Gallery. Most of the wall sculptures are variants on a theme: a horizontally oriented, bracket-shaped metal structure placed flush against the wall, its parallel arms jutting forward. Indeed, in their size and simplicity, they could almost be utilitarian objects.

“I’ll have to admit that a bunch of people asked, ‘Are these part of the exhibition?’” Jeff recalled, amused, when I sat down with the brothers at Linnaea’s Café. “Which was really great.”

The same would never be asked of Dalton Jamieson’s exquisitely rendered series of still lifes, completed in his former downtown studio. Dalton’s paintings are most assuredly paintings. In fact, I would take that description a bit further: They are paintings in the purest sense imaginable. Freed of contaminants, consciously rejecting narrative or symbolism, Dalton’s still lifes become exercises in light, depth, color, and composition, evocative of nothing in particular.

Like Jeff’s sculptures, Dalton’s oil on wood pieces present multiple variations on a theme: a simple arrangement of a stainless steel bowl and two plastic cups might be depicted in the morning light and once again, from a slightly different angle, in the afternoon. The technical mastery of the paintings is baffling. The window’s reflection warped in a metal bowl, the soft glow of translucent plastic in the light, and the shadows rippling across folds of a scarf are touches so intriguing as to belie the banality of the subject matter.

“It’s a pretty recent thing,” Dalton said of the still life series. “I would say within the last year or two. Before that, I was painting interiors of wherever I lived, basically. I’d remove all the furniture out of the way and just paint open doorways, that kind of thing.”

Dalton’s “Interiors” show exhibited in 2010 at Compact Gallery, the San Luis Obispo space Jeff operated until closing it almost a year ago. Despite the naked neutrality of the spaces depicted, some viewers still managed to find a story within them, Jeff recalled, which hadn’t been Dalton’s intention. The ones with a room depicted through a doorway, for instance, were described as evoking mystery.

“That’s just people bringing their own stuff to it,” Jeff said. “It can’t just be about what it’s about.”

“What it’s about” is something far more fundamental.

“Light is the main thing. And space. And creating depth on a two-dimensional surface,” Dalton said simply.

“If you think about these paintings that we both love, old paintings from the Renaissance and such, that we’re infatuated with, almost all up until Vermeer are religious stories, religious allegories. And so we,”—he selected his words with care—“we’re not profound practitioners of that, and we would sometimes overlook these stories, and still look at the beautiful paint and the great imagery.

“And in a sense,” he continued, turning to Dalton, “I think that’s what you respond to. I don’t think you respond to those stories either, those religious stories, but you were looking purely at the paint and the light.”

Several of Dalton’s oil paintings in “More is More” owe their unusual sense of perspective to a modified version of an old technique. The artist, who typically paints from life, achieves an uncanny effect by viewing a subject through a pane of Plexiglas, closing one eye and making an initial sketch onto the glass with a dry-erase pen. The end result is an almost fisheye view, neither photographic nor the result of ordinary, two-eyed observation. The technique gives Dalton’s paintings, in his brother’s words, “a tippy little offness.” Dalton says it gives him a headache.

With the notable exception of a student show or two, the Cuesta College Art Gallery has stood empty for some time now—a terrible waste, since the space is likely the finest on the Central Coast for exhibiting art, with ample room, high ceilings, and a skylight providing a natural glow. But without proper funding from the college, this asset has been underused for several years. Recently, though, as part of a fundraiser in support of the gallery, the venue has been brought to life again with “More is More.”

Jeff and Dalton admit the show’s title was something of an afterthought. But it’s an oddly fitting one, especially considering Jeff’s longtime association with the sculptor Donald Judd, for whom he began working as a furniture fabricator while living in New York. 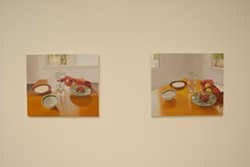 “‘Less is more’ is a famous minimalism statement, and I think we’re making fun of that,” Jamieson explained. “Because the guy credited as one of the people who started it, Judd, hated the term ‘minimalism,’ and he fought for the term ‘maximalism,’ that, ‘I’m not a minimalist at all, I’m taking everything into consideration.’ Which I thought was true.”

Like his brother’s, Jeff’s contributions to “More is More” represent a rejection of narrative. The artist insists his wall sculptures have no inherent symbolism, though it’s human nature to see something there: a pair of reaching arms, perhaps, in the protruding pieces of metal. A triptych of seemingly identical objects turns out to vary greatly in the shape and angle of their sticking-out arms—though each of these angles in turn harmonizes with the other when viewed from the side, finding places to meet up with one another.

“It’s actually a new thing that I need to push much harder to see if it can go somewhere good,” Jeff explained when I asked about this uncanny kind of alignment. “It’s kind of exciting. They’re actually sculptures; they come off the wall, they come out into the room as objects, you know. And something that’s working for me there is, they go a little bit into that optical art stuff. … Are they different? Are they not different? What are they doing? They’re kind of tricky in that sense, hopefully.”

One unifying quality to Jeff’s sculptures is their ability to alter the space around them in a manner incongruous to their small stature. A silver rectangular structure with angled sides casts a shadow on the wall below it, the unusual shape of which is nearly echoed by the patch of light reflected onto the wall above the structure. It’s as if the piece takes up more room than its physical form. And while Jeff asserts his pieces aren’t “about” the shadows they cast, the manipulation of  light certainly does contribute to the work’s impact.

Inspired by large-scale works by the likes of Robert Irwin, Jeff’s aim is for his art to change the space in which it’s held, he explained.

“I like it when the room feels altered, and different, and beautiful, but I can’t afford to make such big pieces,” he said, “so I’m trying to do little parts of that, feel those kinds of feelings, on a smaller scale.”

Arts Editor Anna Weltner’s shadow has come unstuck. Send soap to stick it back on to aweltner@newtimesslo.com.