Is this the party to whom I am speaking? 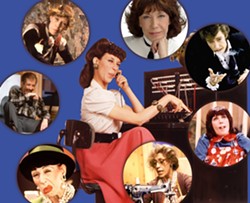 Lily Tomlin appears not to have aged since she first showed up on the small screen as the snorting telephone operator Ernestine and bratty 5-year-old Edith Ann. But since then, she’s been—in no particular order—the vengeful Violet Newstead of 9 to 5, the voice of Ms. Frizzle in the Magic School Bus series, the president’s secretary in West Wing, a fabulously dressed existential detective in I Heart Huckabees, a visitor to Desperate Housewives’ Magnolia Lane, and the one-woman cast of Jane Wagner’s The Search for Signs of Intelligent Life in the Universe.

Known for her versatility, Tomlin draws from her many characters to make up her current self-titled solo show, coming to Cal Poly’s Performing Arts Center on Feb. 19. New Times caught up with Tomlin to talk about the upcoming performance; her career in film, theater, and TV; and how to get past television censors in the ’70s.

NEW TIMES You have a lot of material to work with. How much of it is new, and how much is comprised of old favorites? What exactly goes into the show that’s coming up?

LILY TOMLIN It’s hard to really say. A lot of characters will be familiar, but I try to give them something current to do.

NEW TIMES I’m sure people will be expecting to see their favorite telephone operator. It must get old for you, but I think for people it just never gets old. Is much of the show comprised of interaction with the audience?

TOMLIN A certain amount. … It is very intimate and informal and direct.

TOMLIN I feel pretty comfortable in most of them, but I prefer live performance. That’s the thing that’s the most immediate. My partner Jane has said many times, “I think the reason you like to perform so much is because it’s the only two hours in the day that you’re in the present.”

NEW TIMES That’s true, because otherwise—I think this is what you mean—with film or animation, you’re representing something that’s happened, and if you do something wrong, you just shoot it again. But whatever you put on the stage, people are going to see.

NEW TIMES The first movie I saw of yours, I was a kid, but it was 9 to 5, with Dolly Parton and Jane Fonda. It was before I was even thinking of the workplace—I think I was a freshman in high school or something—but I remember the depiction of the workplace cattiness and the gender inequality. It was very exaggerated, but for me it had a profound effect. I thought, “Oh, is that what I’m going into?”

NEW TIMES My mom got angry because there was pot smoking in it, and she thought that was a bad influence.

TOMLIN So she did or she didn’t like it?

NEW TIMES Oh, she liked it. She actually let me watch it, and then she goes, “Now, they’re smoking, but it’s a movie, and I don’t want you to think this is a good idea.”

TOMLIN You know, Ronald Reagan, in his memoirs, he talked about watching 9 to 5 at the White House, and he talked about how much he didn’t like the pot scene. He didn’t think that was necessary.

NEW TIMES How would you say women’s standing in the workplace has evolved since [9 to 5]?

TOMLIN Well, it’s changed somewhat. People are more conscious. But I’m sure it’s still largely male dominated. But lots of women have gone on to be CEOs. Just as there are more women in the Senate and the House and everything. They don’t really have gender parity in pay. Most corporations don’t provide childcare or daycare.

NEW TIMES Even though it was a movie, I actually liked the model that was created when the boss was away, tied up, and the women were just running the place. It became a happier place. There was a childcare center …

NEW TIMES I thought those were great ideas. And then it was very poignant that the main guy from the head office, he comes down, and he loves all of these ideas. And then he says, “But you’ve got to do something about that equal pay thing.” And that’s kind of the end of the movie.

TOMLIN Exactly. And it’s still the case. And this is 30 years later.

NEW TIMES You began rising to prominence with Laugh-In. How would you say television has changed since then?

TOMLIN Oh, God, there’s literally about a hundred times more channels. … On Laugh-In, half the fun that show used to have was trying to push the boundaries. The Flying Fickle Finger of Fate, and the Farkle family, all that stuff. Even Ernestine used to dial the phone with her middle finger.

NEW TIMES Did you get caught eventually?

TOMLIN Well, yeah. They said I couldn’t dial with my middle finger. And we used to say things, like if I called Mae West, Ernestine would say, “I understand you’ve been putting sequins on your equipment.” And then I had to start saying “telephone instrument.”

NEW TIMES It can make it funnier, those restrictions. You watch a lot of old comedians, and they have a lot of barriers they have to get around. Sometimes it makes them more creative.

NEW TIMES Which is a good metaphor for what the actors were trying to do, trying to get past their producers.

TOMLIN George Slaughter, the producer of Laugh-in, he’s got notebooks with all the censor notes from all those years, how laughable and funny they are. He’s thinking of publishing a book of them. They would write him, he would write back. You know, every time a script was submitted, they’d go over it with a fine-toothed comb.

NEW TIMES It’s always interesting to see what censors miss, what Americans get to see, and then what gets bleeped out. So I think that would be a fantastic book.

TOMLIN It would be fun to see. Even when I was doing specials on television, my first couple of specials, Richard Pryor was my guest, and even in ’73, they sent word down for me not to kiss Richard goodnight. It could be because—I mean, we did it anyway—but it could be because Richard had come to the show that week with his hair cornrowed. And people hadn’t really seen … and he had kind of white leather wrapped around each dread. Anyway, they were really bizarre in those days.

NEW TIMES What are you planning to do next, with your career?

TOMLIN Well, Lisa Kudrow had a web show called Web Therapy, and Showtime picked it up. And it’s going to debut in February or March. They shot footage with me as her mother. It’s very fun and inventive. I’m eager to see how it came out.

NEW TIMES The last film I saw of you was All of Me, with Steve Martin. I noticed that even though you’re playing this cranky rich woman, and your soul gets stuck in his body and everything, there’s still the same kind of argument, or dialogue, between the sexes. I drew some parallels between that and some of your other work, and of course 9 to 5. Is that something that is intentional?

TOMLIN I didn’t have very much to do with how the script developed. I tried to give my input in certain kinds of things, but it was really, the conceit was because we have a feminine side and a masculine side. … It was really using that to depict the conflict, to give it some basis in reality and truth, in that this kind of schism in our bodies, the right and left brain and so on. But the only influence I had on that script was trying to keep it from being too sexist. Like in bed when, theoretically, I’m spanking her. He would be slapping her, but theoretically my character would be slapping her. And I said, you can’t slap a woman like that, across the face. And especially in bed, it just looks horrible. So I said, what we should do is spank her, like sex play: “Oh, you bad girl.” Make it appear to be playful. But whatever, it’s a damn comedy. Although a good one.

NEW TIMES You’ve been collaborating with your partner Jane Wagner for so many years. Do you feel that, since you use so much of her work, that she’s underappreciated?

NEW TIMES Is she okay with that?

TOMLIN Oh, yeah. That’s what happens, unfortunately. It’s not fair, it’s not right, but yes, I get all the credit for everything. … It happens with all kinds of performers and writers. Even Ann Richards, the ex-governor of Texas, who’s died now, she was such a colorful figure, and she gave the keynote address at the Democratic Convention, like back in ’86. And Jane had written a line for her. And George Bush [Sr.] was well known for stumbling over words, as his son did. And she said, “Poor George, he can’t help it; he was born with a silver foot in his mouth.” It’s a hugely popular line. And everybody thought Ann wrote it. Jane never did get credit for it. … You being a writer, I’m sure this seems extra heartbreaking. I’ve spent a lot of time writing people who would quote lines, even on the Internet, every line that has ever come out of any of the stuff we’ve done, they give me credit for all of it. Occasionally, they’ll attribute it to Jane. It’s because it’s convenient. We’ve published plays and everything, with her authorship, and they still will attribute it to me, because I performed it, and it’s identified with me. Ted Koppel, when he had Nightline, there was a line that he must have quoted over the years five or six times.

NEW TIMES Which one was that?

TOMLIN “No matter how cynical you become, it’s never enough to keep up.” In this modern era, it is especially pertinent. You just won’t believe what passes, what is accepted. And he must have quoted it five or six times, and he would always attribute it to me. I would write him and say, Ted, you know that’s Jane Wagner’s line. But they liked to be able to tie it to somebody well known.

TOMLIN So you’re in San Luis Obispo. Do you live there?

NEW TIMES I do.

TOMLIN When I came to California, years and years ago to do Laugh-in, one of the first places I went was up to San Luis Obispo, on a little road trip.

NEW TIMES How was it?

TOMLIN Oh, it was great. It was wonderful. Especially coming from New York. And I’m from Detroit originally, so just being in California was a fantastic thing.

TOMLIN Oh yeah, I love the way it looks. I think this is the first time I’ve ever played there.