Is your food safe?

Food handler cards are now required for all restaurant staff, and it's about time

June 20, 2013
comment
One of the first classes culinary schools require for aspiring chefs is safe food handling. It’s a skill that every professional cook knows is every bit as important as learning how to handle a knife. That’s why I’ve always been skeptical about inexperienced people opening restaurants. Most of those mom-and-pop cafés make serious mistakes such as reusing soiled utensils, or while prepping food for cooking. And it usually extends to serving food as well, such as staff handling money and not washing their hands before touching the food you’re about to be served. 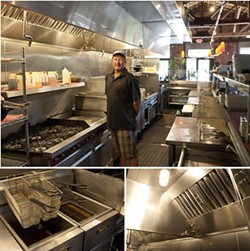 It’s not much different at some of my friend’s homes where the cook uses the same cutting board to cut raw poultry and cooked meats, with no thought of cleaning between each use. Once I tried to provide a friend with helpful hints but he was indifferent, and that’s why I didn’t eat his food (fortunately it was a barbecue rather than a a sit-down dinner, so he never noticed). I strongly urge everyone who loves to cook to educate themselves about safe food handling.

It’s difficult to imagine but until the beginning of this year no restaurant cook, front-of-the-house server, or bartender was required to study safe food handling. Now the state of California requires that everyone working around food service take a safe food handlers course and pass the exam by at least 70 percent to earn a “Food Handlers Card.” It’s good for three years, even if you work in more than one restaurant, and every employee in a restaurant must carry that card. The health department is lenient about those just hired at a restaurant: new employees have 30 days to comply or the restaurant will be cited by the SLO County Health Department (SCHD).

Most consumers are concerned about cleanliness and appreciate the fact that certification is required now. It’s not that costly for the employee at $15 online, and it’s as prudent for the business owner as it is for the consumer. The latter message was pointed out by restaurateur Leonard Cohen, who earned an impressive 100 percent score by the SCHD in both of his restaurants—Olde Port Inn and Ciopinot.

Upscale restaurants are considered in the high risk category by SCHD, thus they are investigated more frequently than chain restaurants that are rated low-risk—go figure. I’d say fast food eateries are at much higher risk because they hire teenagers. I worked with many teens when I cooked professionally, and met many who where indifferent to rules. Chains have nothing in common with fine restaurants that are typically run by restaurateurs with the highest standards, and their ethics motivate their staff to follow suit.

When I called Cohen to ask how he does it, he immediately replied: “Come on over and we’ll get the flashlight out and look under the bar and behind the refrigerators. You’ll be blown away by how clean everything is—I’m a clean freak. It’s in my DNA. I don’t want bugs and pests in my restaurants.” Noting that his two restaurants are among the few countywide with open kitchens, he insisted that he will hold his kitchens up to any others in SLO County. “When the (health) inspector finishes here, I always ask if there’s a kitchen cleaner than ours, and they say, ‘No.’”

Proper training of the restaurant staff provides a much better understanding of the importance of handling foods properly, and how easily foods can be cross-contaminated. The latter is a big issue with the SCHD, which upon inspection can demand proof that your staff has earned the California’s Food Handler’s Card when inspecting restaurants, delis, or grocers.

According to Scott Milner, an environmental health specialist for more than 12 years with SCHD, the typical mistake made by professional cooks is improper hot and cold holding temperatures. Other problems he noted are far more simple: “Improper hand-washing, working when sick, and basic cleaning and sanitation; we haven’t yet pushed people to use gloves when handling ready-to-eat foods but that will change soon.”

What’s the best way to prevent viruses from contaminating food? Good personal hygiene, which is as simple as proper hand washing. Most viruses are transmitted from employee’s hands and mouths. Hand washing is the most important practice in preventing virus-related illness like norovirus and Hepatitis-A.

At the Cass House in Cayucos, always among my highest recommendations for local dining, chef Jensen Lorenzen constantly dazzles guests with his gourmet creations. His restaurant garnered a rare 100 percent score by the SCHD, too. Lorenzen provided me with a kitchen tour that clearly proved why he earned it. The racks in his walk-in refrigerator were spotless, nary a spill or a crumb out of place. Believe me, I know from experience that no chef can make the kitchen that perfect at the last minute just because the health inspector shows up.

When asked about his sanitary practices, Lorenzen explained: “I’ve worked in many restaurants where chefs were very concerned about cleanliness. I’ve also worked in kitchens that were dirty, and that’s discouraging to the cooks. In my mind, mise en place [the French term professional chefs use for saying everything in its place] translates all the way through the restaurant. And it’s very difficult to maintain our cleaning standards after a long service. I believe there are certain things any establishment can do to raise their standards.”

His last meaningful point, “As the chef, you’re ultimately responsible for the overall quality of food and service.” Lorenzen and I agreed: If you walk into a highly-touted restaurant that has pervasive foul odors, let alone appears unkempt, walk back out. It does not matter how much I hope to find my next great discovery. ∆