Todd Struass-Schulson (A Very Harold & Kumar 3D Christmas, The Final Girls) directs this fantasy-comedy about Natalie (Rebel Wilson), a woman disenchanted by romance who finds herself living in a romantic comedy. (88 min.) 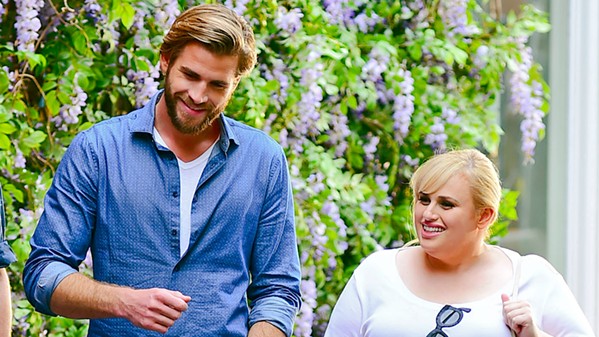 Glen This lightweight but funny rom-com manages to pull off a neat trick: It mocks and celebrates its genre simultaneously. The film opens with 12-year-old Natalie (Alex Kis) as she gazes at the TV playing Pretty Woman. Natalie's mom (Jennifer Saunders) quickly disabuses her of the idea that romance is magical or that she's the kind of girl who could ever attract someone who will treat her like a princess. Cut to the present: Now a romance-cynic working at an architecture firm where she's tasked with designing lowly parking garages, Natalie is at the bottom of the social pecking order and convinced she's not worthy of love or even interested in it. She has no clue her workmate, Josh (Adam Devine), is interested in her, and her only friend—her assistant, Whitney (Betty Gilpin)—can't seem to open her to potential romance. In a move pulled out of the rom-com cliché handbook, Natalie has a head injury and awakens into an alternate universe solely populated by rom-com clichés. A client who formerly dissed her, Blake (Liam Hemsworth), now finds her "beguiling," and nerdy Josh manages to attract the attention of "Yoga Ambassador" and swimsuit model Isabella (Priyanka Chopra). Desperate to escape this treacle-filled world, Natalie believes she needs to get Blake to tell her he loves her to break the spell and return to her own romance-free reality. As a farcical 90-minute distraction, Isn't It Romantic does the trick.

Anna This one fits the bill if you want both a rom-com fix and a laugh at the ridiculousness of the genre. Natalie can't see herself as the princess, complains in a low-key "I don't really care, but ..." style about being ignored and overlooked, and has a crappy New York apartment complete with a disobedient dog. While some of the sad-sack mentality is played up, luckily the character isn't too down in the dumps to have some fun in her flower-infested new reality. There are a couple of musical numbers, a rich prince looking to steal her heart, and a bunch of life lessons to learn along the way for always-overlooked Natalie. Whitney is her rom-com-obsessed assistant, and even though Natalie mostly ignores Whitney's watching movies all day, she can't help but give her friend an earful as to why the genre is complete crap. When she wakes up to a hot doctor, perfectly done makeup, and a beautiful apartment housing her impeccably coiffed pup and a walk-in closet of dreams, nothing feels right. This isn't her life, New York isn't this clean, and she doesn't garner attention from pretty boys like Blake. What the hell is happening? Predictable and sweet, this movie is most likely exactly what you expect from the trailer. It's not new ground, but it is fun and funny, and at 90 minutes it's a quick romp through fairy tale meets reality.

Glen Once she realizes she's stuck in rom-com land, Natalie tries to have a little fun with it. After all, Blake's a hunk. Why not enjoy him? When she awakens to him coming out of the shower but doesn't remember having sex with him, she tries to bed him only for it to cut to her awakening once again with him coming out of the bathroom wrapped in a towel. Not only is she trapped in rom-com land, it's a PG-13 rom-com land! Whenever she swears, it's covered by the sound of a car horn or some other ambient noise. The film's also filled with homage to a lot of classic moments from rom-coms like When Harry Met Sally and My Best Friend's Wedding. It's all a little bit like The Wizard of Oz, where Natalie encounters the same characters from her real life but they're somehow different in this new world, and like Dorothy, Natalie just wants to get home. Of course, along the way she learns that she's worthy of romance, doesn't have to be everyone's doormat, and is a talented architect. Isn't It Romantic isn't nearly as good as some of the rom-coms it satirizes, but it manages to be a fun diversion largely thanks to its lead. Rebel Wilson has great comic timing, an expressive face, and a commitment to the role. If you're looking for a light-as-a-feather farce that allows you to enjoy the rom-com genre while also smugly dismissing it, this is the film for you.

Anna It's an easy setup, and while the realities of life in fairy tale land are sometimes a little less than knock-your-socks-off great, the perks aren't too shabby either. Sure, Natalie is going to undergo allergy attacks from all the flora, but she'll also be able to conjure Blake's phone number from some flower petals in her pocket when she comes down on the wrong side of the law and needs to make a phone call. The film could be easily dismissed as a silly, whimsical work, but Wilson brings the heat and knows how to make the mundane hilarious. She's the selling point of this flick, and Levine is a great counterpart with his own goofy yet self-confident character. The whole time Natalie thinks she has to make someone fall in love with her for the rom-com world to end, and of course in the end, she realizes the importance of loving yourself before seeking love from others. The new confident and capable Natalie is ready to take on the world, kiss the dude, and kick ass. Bottom line: It may not be as great as a truly solid rom-com like Pretty Woman or When Harry Met Sally, but it's a fun trip, with Wilson taking the wheel and delivering up some pretty solid comedy. Δ