Facing fear: 'IT' remake shows not all monsters are obvious

Editor's note: This week's Split Screen was written by Arts Editor Ryah Cooley and Staff Writer Karen Garcia while Glen and Anna Starkey were on vacation.

From director Andy Muschietti (Mama) comes the remake of the 1990 mini-series thriller IT, based on the hugely popular Stephen King novel of the same name, which has been terrifying readers for decades. When children begin to disappear in the town of Derry, Maine, a group of young kids are faced with their biggest fears when they square off against an evil clown named Pennywise (Bill Skarsgård), whose history of murder and violence dates back for centuries. (135 min.)

Ryah: One of my earliest memories as a young child is having a clown lamp and blanket in my room and being scared out of my mind by both. Unfortunately I was way to young to have the ability to vocalize this to my parents, so you can imagine the kind of lifelong emotional scarring that ensued. As an adult I've never been one for scary movies, so needless to say I wasn't really on board for IT as our Split Screen selection, but then Karen asked me, "WWGSD? (What would Glen Starkey do?)," and I knew my fate was sealed. So here's the run down: King's horrific clown monster Pennywise, who dwells in the sewers, is portrayed by Skarsgård (Allegiant, Atomic Blonde) this time around—in the original, it was Tim Curry (Kinsey, The Rocky Horror Picture Show)—and is the cause of a fleet of missing children in the town of Derry, Maine. Everyone in the town seems pretty nonchalant about this, except for the children, who as the clown's chosen victims are understandably terrified. Bill's (Jaeden Lieberher of The Book of Henry) little brother Georgie (Jackson Robert Scott) is the first kid to vanish in the film's opening sequence, leaving Bill desperate to find answers. Rounding out Bill's crew of misfit friends looking to uncover the truth is the hilarious, smack-talking Richie (Finn Wolfhard of Stranger Things fame), new kid Ben (Jeremy Ray Taylor), germaphobe Eddie (Jack Dylan Grazer), the slacking-on-his bat-mitzvah-studying Stanley (Wyatt Oleff), the homeschooled kid Mike (Chosen Jacobs), and Beverly (Sophia Lillis)—the token girl of the group with a swirl of rumors surrounding her.

Karen: The film opens up on a rainy day with Georgie running after a paper boat floating down the street. He accidentally hits his head on a construction sign while his boat continues on. When he catches up to it, he's too late as it's fallen down a storm drain. When he peers into the drain he's startled by Pennywise the clown who coaxes Georgie closer with talk of a carnival in the sewers. After gaining some of Georgie's trust, Pennywise savagely bites Georgie's arm off before reaching for his leg, and then the scene cuts to black, leaving you with more than a bit of anxiety for little Georgie. Fast-forward to the present and Georgie's big brother Bill is left to taking blueprints of the city from his dad's office to figure out where Georgie could be—all the while hoping his little brother is still alive. His plans are crushingly halted when his father yells at Bill to stop inventing plans because Georgie is dead. Sheesh, way to suck the empathy from a kid who lost his sibling, he was just trying to help! School's out and the summer is in full swing, but Bill's friends are somewhat reluctant to help him solve the mystery; they don't want to be the missing kid on the next poster. What makes matters worse is Pennywise starts introducing himself to each member of the losers' gang, manifesting as their worst fear. It starts with his calling card, a bright red balloon, or if you're close enough to piping of any kind, you'll hear voices coming from below. After he's scared you enough, he sometimes appears after the pop of the balloon when the kids are left in their most vulnerable state. 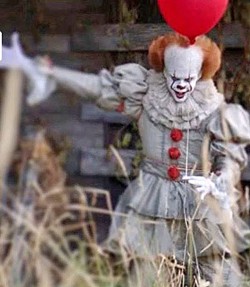 Ryah: The thing about IT is that it's a movie that a 12-year-old would find scary, but it's done extremely well. Honestly, the scariest parts of the film have nothing to do with the murderous clown and everything to do with the very real shit these kids are dealing with. Bill has zero empathy or support from his parents over the loss of his brother; Beverly is dealing with her ultra creepy, lecherous dad (nothing super graphic is shown, but it's blatantly implied that he's molesting her); Mike is the only homeschooled and black kid in town who lost his parents in a house fire; and everyone is getting the shit kicked out of them by the town bully Henry (Nicholas Hamilton), who apparently has a lot of rage built up inside because his dad is a hard-ass cop. In one scene we see Henry take a knife and attempt to carve his name into Ben's stomach. It's all kinds of messed up. Like Starkey would (and did) say, IT works best as a coming of age story about facing your fears even when you feel vulnerable, rather than a straight-up, jumping-out-of-your-seat scary movie. That is, provided you're a grown-up who has long gotten over your clown issues. Despite the majority of the cast being under 18, these young actors all deliver stellar performances. In particular, I'm excited to see where Lieberher, Wolfhard, and Lillis' careers go as they all grow up and continue to hone their craft. Oh, and to the jerk that left a red balloon in the hallway outside the theater room, your gesture was not appreciated. If you're looking strictly to be scared out of your mind, then I'd say this movie isn't worth a full-priced ticket, better to go for a matinee.

Karen: All in all the film was a pretty good adaptation of the original novel and the mini series that came out in 1990. I wasn't too sold on Skarsgård's performance as Pennywise. Sure, he was scary looking but it was just makeup and special effects. What made Tim Curry's performance as Pennywise so scary in the '90s was how much of a creepy old man he was with regular clown makeup. I agree that the scariest scenes in the movie are with the parents, who are 100 times more horrific than Pennywise—minus a creepy headless body running toward the screen. And where are these so-called parents when Pennywise wreaks havoc on these kids? And why doesn't this town care that kids are mysteriously going missing one by one? We find out that Pennywise comes out every 27 years to feed on children once the gang realizes that they have to stop the clown before they go missing, too. They also realize the power they have together as a group. They aren't scrawny little kids anymore who can't defend themselves from Henry the psycho bully. If they band together, the gang comes to the conclusion that their worst fears can be conquered, but can Pennywise truly be taken down? Δ