It's a bird! It's a culturally charged musical experience!

Quetzal brings rhythm, politics, and history to the Clark Center 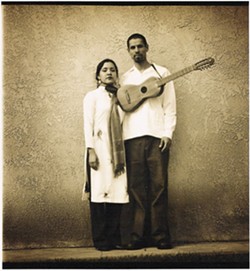 In scientific circles, the term quetzal refers to a crimson-chested bird located in tropical regions of Central America. With iridescent green plumage, the exotic bird, genus Pharomachrus, answers to several names, among them the crested, golden-headed, and resplendent quetzal. Those who climb the mountainous regions where it resides often hear its song, a single high-pitched note, before they capture a glimpse of the elusive bird.

Musically, however, the title has been appropriated by a Los Angeles-based Chicano and Chicana band founded in 1993 by one Quetzal Flores. Unlike its Mayan namesake, the group shuns ostentatious visual displays, favoring the integrity of the music and their own dignity as humans over a sexier, marketable image. Audiences can judge this distinction for themselves when Quetzal performs at the Clark Center on April 25.

When Flores first began to assemble the group, in a small café in Los Angeles’ Little Tokyo, his expectations were high. Citing R.E.M., The Smiths, and early U2 as among the group’s earlier influences—note the diversity of nationalities—Flores wanted to simultaneously explore the trajectory of Chicano and Chicana music, embrace a sense of social responsibility, and speak to a new generation of thinkers and artists as well. They weren’t Los Lobos. Or punk rock. The challenge was for Quetzal to create its own voice to express the experiences of its performers while resonating with audiences from communities around the world.

The songs are original, fluctuating between Spanish and English. The quartet draws upon such diverse rhythms as folklore, salsa, R&B, and soul. The most recent album, Die Cowboy Die, released in 2006, is about 60 percent Spanish and 40 percent English. The ability to employ two different languages, and sometimes jumble them into Spanglish, has afforded the group greater freedom as songwriters. Some things are simply better said in English, others in Spanish. The album’s title song is called “You Must Die.”

“Noam Chomsky once said that only when you go throughout Latin America is it very common to see soldiers on every corner of the sidewalk with machine guns,” explained Flores. “In the United States you would never see that because we have the soldier deeply embedded in the psyche. The concept of Die Cowboy Die is doing away with that or the healing process of colonized people, the possibility of us doing away with the cowboy mentality.”

The album’s first song, “Migra,” addresses challenges faced by immigrants, the brutal methods employed by Homeland Security and xenophobic attitudes against immigrants. In “Candil Candelario” the lyricists derive influence from the saying “candil de la calle, obscuridad de su casa (a beacon of the street, darkness of his own home).” The song criticizes individuals who devote themselves to a political or social cause while abusing or neglecting their family.

If the concepts sound stern, the tone is not; Flores insists that the music is meant to be a celebration, encouragement for people to relate to one another as more than just commodities.

“The music and the lyrics are a place for people to remember their humanity,” he said.

The band’s identity is nebulous, with performers coming and going throughout the years. Flores’ wife Martha Gonzales is the group’s percussionist and lead singer. Her brother Gabriel Gonzales also performs vocals, and Flores plays a number of different guitars. Currently, Flores and Gonzales live in Seattle because Gonzales is in the process of earning her PhD in Women’s Studies. But they’ve traveled across North America, Asia, and Eastern Europe. Their performance trajectory has even brought Quetzal through San Luis Obispo, to Downtown Brew while it was still SLO Brew, and the Cuesta College Auditorium before it was deemed unsafe. They’ve played in some remarkable places, but Flores insists that it is the audience that sets the tone for each performance.

“It’s not so much the venue but the public that occupies the space,” he insisted. “There’s a big difference between an audience full of people who are expecting to get this fun and sterile cultural experience and an audience who expects to be challenged a little bit—both on a political level and on a musical level.”

When Quetzal takes the stage on April 25, they’re hoping for an audience that will interact with them, that will work to eliminate the mental barrier between audience and performer. During the hour and a half long show they will perform songs from all four albums—Quetzal (2000), Sing the Real (2002), Worksongs (2003) and Die Cowboy Die (2006). They will dance as well; Martha performs with a tarima, a wooden box she dances upon, drumming rhythms with her feet.

There’s no denying that Quetzal is peddling ideas, along with their music. Like its winged namesake, the group has come to symbolize an ideal: freedom. And that’s not an identity they’d willingly exchange, not even for the rock-star persona that critics insist would garner them a rapid ascent into the upper echelons of the music industry.