It's a doll's life

To children, Christmas more or less means toys. So it’s fitting that Ballet Theatre SLO’s winter production, La Boutique Fantasque (the Magic Toyshop), should feature playthings as protagonists. La Boutique is a funny little ballet, not more than an hour long. The setting never strays from the glittering, wondrous shop where toys come to life at night, but resume their wooden stillness during the day as wealthy families with grabby little children admire them. 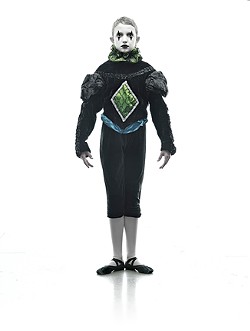 The drama begins when two families are enthralled by two magnificent harlequin dolls, played by an expressive Sofia Woods and the elfin Niko Yaroslaki. One family decides to take the male doll, the other the female. The toys are paid for, and arrangements made to pick them up the following day. But after the shopkeeper and his assistant—danced by Thomas Bourne and Abigail Dorman—have closed up for the night, the toys spring once again to life, spilling forth from their shelves and boxes in a performance that will delight young audience members. But this time, the toys are deeply upset that the two lovely dolls will be separated. After all, they’re so in love! So the valiant toys hatch a plan to keep the pair from being sold separately.

La Boutique, choreographed and directed by Melissa Barnett, is among the first Ballet Theatre shows to be staged at Dance Obispo, the ballet company’s studio space that recently began doubling as performance venue. The move means a less costly production, though the comparatively close quarters leave little to no margin for error. The dancers are always a few feet from the audience, making, clean, precise steps a must.

And in this setting especially, the theatrical element of the show is imperative. What would a magic toy shop be without a gaggle of awestruck little children, their minds blown by a life-sized jack-in-the-box (danced by Cami Love), a model train (Missy Love), a great huggable bear (Shae London), and troupes of dancing French clowns and baby poodles? With the audience so near to the performers, quality acting here is just as important as dancing. This is something Barnett and Ballet Theatre Artistic Director Theresa Slobodnik, at a recent rehearsal, repeatedly implored to their young performers—the former staying upbeat, the latter shaking her head wearily, together a perfect picture of the joys and struggles of working with children.

Usually the minimum age to perform is 7, Barnett explained, though some poodles are as young as 3.

“We have all these awesome younger kids,” said Barnett, who also teaches dance to children. “I wanted something age appropriate and inspiring.”

In some productions of La Boutique, which was originally conceived by the Russian choreographer Léonide Massine, the shopkeeper is assisted by his wife, allowing room for a subplot of marital dispute and reconciliation. (One version in particular has two children hiding out in the shop until after closing, playing with the toys. When their parents return later, slapping their foreheads, exclaiming, “We knew we forgot something!” the shopkeeper angrily blames his wife. Sullenly cleaning up all the scattered toys, she begins daydreaming of a happier life. In a kind of hallucinatory twist, Pinocchio tells the Blue Fairy to make her dreams come true, and the wife’s simple garb is transformed into a shimmering gown. That doesn’t happen in this version.) Barnett opts to keep the narrative simple, focusing on the love story between the two harlequin dancers.

The shopkeeper and his wife return the following morning to open up the store, and the customers arrive shortly after to claim their dolls. But all parties are stunned to find the pair has gone missing, knowing nothing of the secret life of the toys. But when the irate customers start attacking the shopkeeper, the dolls spring into action to defend him. What’s a Christmas ballet, after all, without a little toy warfare?

Arts Editor Anna Weltner has a wind-up key in her back. Contact her at aweltner@newtimesslo.com.