It's a process: Paso ArtFest's quick draw event showcases art in the making

At 22 years old, Ken Christensen wasn’t sure exactly where he wanted life to go. So he dropped out of college and traveled to Jamaica where he met an art student from Boston painting watercolor pictures.

Christensen, who’d always had a knack for all things creative, was fascinated. When his new friend left to return home, she gave him her watercolor set. He took those and joined a cargo ship heading through the West Indies down to South America, painting each island they stopped at. The boat would dock in the morning and the view would be his subject matter for the day. 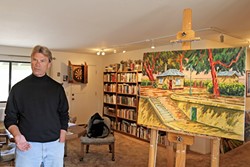 “I’ve kind of painted every day since then,” Christensen said.

While he eventually went back to college, earned a degree in history, wrote books, and dabbled in photography, painting remains his first and main love. The Michigan native migrated to the Central Coast in 1999 and settled down in Los Osos, where hundreds of large, finished oil paintings fill his garage. When clients come to look at his offerings, they’re often so overwhelmed by the selection, they have to return home to think about which of the many paintings to buy.

At the upcoming PasoArts Fest, Christensen will have to cut that time in half. About a dozen artists, including Christensen, will participate in the Quick Draw event, taking no more than 90 minutes (in years past the limit has been a full two hours) to paint a landscape, building, or scene from downtown Paso Robles. It’s a quick draw and a quick sell. Paintings will go up for sale at the festival as soon as they’re completed. Any unsold paintings will head home with their creator.

This isn’t the first rodeo for Christensen, who has participated in the event since Paso ArtsFest first began in 2009.

“It’s something that kind of fires up people to see people painting in person,” Christensen said. “You gotta go a little faster. It’s not a whole lot different.” 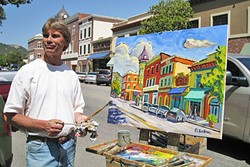 Sasha Irving, event coordinator for the festival and executive director for Studios on the Park in Paso Robles, said the quick draw event allows spectators to be a part of the creative process.

“There’s still that element of surprise about art making that’s so exciting,” Irving said. “It’s the thrill of capturing that moment. To be a part of that process as a spectator is really fascinating; it’s a peek into their really talented minds. We can walk by a street, but are we going to see Vine Street in Technicolor?”

Yes. Well, at least you will if you happen to be strolling around Vine Street and 12th Street on May 28, where Christensen will be setting up his easel and paints. It’s one of the artist’s favorite spots in Paso Robles.

“I like doing houses,” he said. “I probably do more architecture than anything else. If you’re going to do these quick draws, you have to do something you’re comfortable with.”

For those looking to stay in and out of their comfort zone, the festival (which kicks off the evening of May 27 with a costume party at Studios on the Park and goes from 10 a.m. to 4 p.m. the following day in the downtown park) offers a little bit of everything from a fine arts sale to a beer and wine garden with live music to a hair and makeup contest to stilt walkers and more. Budding artists can even get hands-on by building a sand castle or getting a cool henna tattoo.

“This festival puts Paso on the map for arts and culture,” Irving said. “It’s incredibly diverse with the programming, so it appeals to a multi-generational audience. It’s just a really special event.”

Ryah Cooley only paints when she drinks at rcooley@newtimesslo.com.