Into the Roaring rolls from one kinetic, rip-roaring track to another, driven by Hawley’s infectious voice and punctuating by an airtight rhythm section spiked by intertwining guitar solos. Villagers will no doubt storm PK’s castle, but instead of torches and pitchforks, they’ll be carrying lit Bic lighters, Sharpies, and copies of their new album, ripe for the signing.

The show—which also features the all-local line-up of Monster Eats the Pilot, The Mighty Fine, and From the Top—will be recorded live for podcast.

Also at Downtown Brew this week, start things off this Thursday, Jan, 7 with Tribal Seeds, Indoubious, and Through the Roots (7:30 p.m.; all ages; $10). Tribal Seeds lists Bob Marley, Steel Pulse, and Midnite as influences on their rock-vibed roots style.

Then on Saturday, Jan. 9, Carney returns to the club (7:30 p.m.; all ages). The rock, blues, and French pop act is fronted by siblings Reeve (voice and guitar) and Zane (guitar) Carney, a couple 20-somethings who’ve taken the LA scene by storm. Hear hints of Jeff Buckley, The White Stripes, Led Zeppelin, John Lennon, and Pink Floyd in their sound.

Finally, mark your calendar for next Thursday, Jan. 14, when rock, pop, and soul singer Tyrone Wells returns to the club with opening act Avanti (7 p.m.; all ages; $8 presale or $10 at the door).

If you’ve yet to have the good luck to see Blame Sally live, turn your director toward Cambria’s Painted Sky Studios this Thursday, Jan. 7, and prepare yourself to say, “Holy crap! These gals are amazing!”

The Painted Sky Concert series presents “an evening of outstanding folk/pop alternative music” with this all-female quartet that features former Central Coast locals Pam Delgado and Jeri Jones. Those two joined up with Bay Area singer-songwriters Renee Harcourt and Monica Pasqual, and together they deliver incredible vocal harmonies and stunning musicianship. Each an accomplished singer-songwriter, they combine strikingly different approaches into a distinct and beautiful sound that’s emotionally charged, highly melodic, and compelling.

To me, Sebastian Luna is that guy who’s been playing with Jody Mulgrew of the Johnny Starlings for the last couple years, but in truth, Luna has been playing music professionally for over 10 years, primarily in San Diego and SoCal. He has toured all over the country with San Diego band, Sic Waiting and with his own band, Arneson.

He moved back to the Central Coast two years ago “and took a semi-hiatus from live music.” He’s now back in the scene with his new band American Dirt, which plays this Friday, Jan. 8 at Last Stage West (6 to 9 p.m.) and again on Sunday, Jan. 24 at Frog and Peach (time to be announced).

Soulful, folky, introspective acoustic rock is what you’ll hear on his myspace page—more like the stuff he was doing with Mulgrew and a big shift from his hard-charging punk days. Still, you can feel a little edge in his tunes.

I can’t say what American Dirt sounds like, but it seems the moon’s rising again. 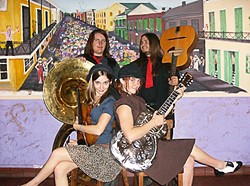 The kids are alright!

Young but awesome Gypsy jazz outfit the Red Skunk Jipzee Band hits the SLO Down Pub this Saturday, Jan. 9, from 8 to 10 p.m. Isn’t that way past their bedtime?

Come early and see Spanky channel the Grateful Dead and classic rock from 6 to 8 p.m. 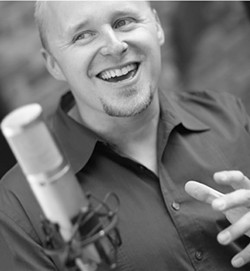 On his poster and on his new CD cover for Love Me Tonight, harmonica player and soul stylist John Németh poses with a hot babe who cuddles up, décolletage on display, as he stares casually out at the viewer. That’s old school cool, Dean Martin cool, The Sands in Vegas cool!

You can wallow in that coolness this Saturday, Jan. 9 (8 p.m.; 21-and-older; $20 at the door) at the SLO Vets Hall when The San Luis Obispo Blues Society presents Németh with special guest Kid Andersen.

According to press materials, “A decade ago, Németh was playing blues clubs in Boise when he caught the attention of Frankie Lee and his band, who introduced him to Junior Watson. By 2002, he was touring with Watson.”

Now Németh is fronting his own act, and for this show he’s got Norway native Chris “Kid” Andersen, “a blues fan since childhood, [who] fell in love with the music of Lightnin’ Hopkins, Junior Watson, and the Kings (B.B., Albert and Freddie). By the time he was 18, Kid was backing American blues stars who came through Norway, including Homesick James, Nappy Brown, and Willie “Big Eyes” Smith.  He moved to California at age 20 (he’s now 29) and released four solo albums before joining blues harmonica legend Charlie Musselwhite’s band in 2004, a gig that lasted until Kid joined Rick Estrin & The Nightcats in 2008.”

The Jim Townsend Blues Band, which plays original goodtime blues, will open the show at 8. Arrive at 7:30 for a free, half hour dance lesson … not that you need it. You’re a terrific dancer! 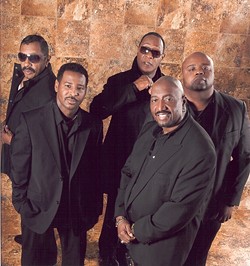 Can it be true? Has it been 45 years since The Temptations had their first No. 1 hit with “My Girl?” Yep, and to celebrate they’ll play a concert this Monday, Jan. 11, at 8 p.m. in the Performing Arts Center’s Christopher Cohan Center.

You’ll hear early classics like “The Way You Do the Things You Do,” “It’s Growing,” “Since I Lost My Baby,” “Get Ready,” “Ain’t Too Proud to Beg,” “Beauty Is Only Skin Deep,” and “I Wish It Would Rain.” Plus they’ll deliver material from their more political period in the ‘60s and ‘70s, tracks like “Runaway Child,” “Cloud Nine,” “I Can’t Get Next to You,” “Papa Was a Rolling Stone,” and “Psychedelic Shack.”

“The more we change,” said veteran high-tenor Ron Tyson, “the more we stay true to ourselves. We’re about singing straight-up soul. It’s a style that will live on forever.” 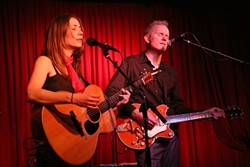 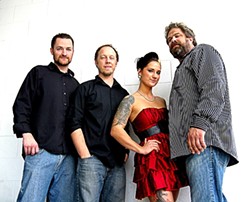 Don’t Google “Minka” in front of your mom. Some Asian chick with ridiculously enormous fake boobs comes up. And for heaven’s sake, don’t link to video results! Good Lord! Do, however, head to Frog and Peach this Thursday, Jan. 7 to see Minka (the band) sandwiched between two Soundhouse sets. Soundhouse plays at 9:30 p.m., followed by Minka at 10:45, and then Soundhouse again at 11:30.

Inhale a big hit of rootsy reggae, ska, and punk when Dub Seeds return to their scene of the crime, Frog and Peach, this Friday, Jan. 8 for a 10 p.m., free show. These Bako boys seem to pack the place, so get ready to dance and sweat.

If you’re looking for something a tad more highbrow, may I suggest the W. Terrence Spiller piano recital at Cal Poly on Friday, Jan. 8, at 8 p.m. in the Spanos Theatre? Spiller will begin with Johann Sebastian Bach’s “Partita in E minor” followed by Béla Bartok’s “Dance Suite.” The second half will contain works by Frédéric Chopin, to commemorate the composer’s 200th birthday, including three of Chopin’s “Mazurkas” and concluding with his “Sonata in B minor,” Op. 58. Tickets are $6 for students and senior citizens and $10 for the public (756-2787).

Sculpterra Winery is home to the drummer of Candle and co-founder of Real Love Records, Paul Frankel, who’s the winemaker there, so it makes sense that the Paso winery would begin booking regular live music. On Saturday, Jan. 9, from 1 to 5 p.m., they kick off their new music series with a battle of singer-songwriters: “The Battle of the Little Gladiators 2,” which features Kevin Coons (lead singer of Candle), Ross Major (singer of Lamb), Rachel Spotten (singer and keyboardist of Candle), with Paul Frankel on percussion. Call 226-8881 for more info.

Paso’s D’Anbino Tasting Room invites you to enjoy a glass of wine and the sounds of Toty Viola and his guitar, from 5 to 7 p.m. this Saturday, January 9.

Rock, ska, rockabilly, and surf rock act The Arcadists play Mr. Rick’s this Saturday, Jan. 9. What time? Dunno.
Mr. Rick’s booking guy Levi Caron forgets little details like that! Just go out there at noon and stay till midnight. They have drinks, I hear.

How does an intimate afternoon of chamber music sound? This Sunday, Jan. 10, at 3 p.m. at Trinity United Methodist Church in Los Osos, experience a concert featuring both classical chamber works and a groundbreaking work of jazz by French composer Claude Bolling. Flutist James Walker will be joined by local pianist Mark Sherman and by members of the Symphony Chamber Players—violinists Paul Severtson and Brynn Albanese, cellist Nancy Nagano, and bass player Ken Hustad—to play Suite for Flute and Jazz Piano Trio by Claude Bolling, Flute Quartet in D Major by Mozart, Suite in A minor by Georg Phillip Telemann, and the beautiful solo flute composition, Syrinx, by Claude Debussy. Michael Nowak conducts. Tickets were $25 to $35, but remaining tickets are on sale for $15, with $10 student rush tickets. Call 543-3533.

Instrumental prog-rock act The Travis Larson Band had a huge 2009, touring the West Coast to the East two times since the June release of their 10th anniversary DVD Rate Of Chang LIVE, opening for the classic rock band UFO, then finishing up the year with guitar legend Ronnie Montrose. Now they’re kicking off the New Year by touring California with New York guitar virtuoso Carl Roa opening their shows, including one this Tuesday, Jan. 12 at Frog and Peach at 9:30 p.m. Rock on.

Country fans, tickets are on sale now for the upcoming Randy Rogers Band show next Thursday, Jan. 14 at The Graduate. Randy’s star is on the rise, with an American Country Music nomination and appearance on both Letterman and Leno. Rolling Stone named his show one of the “Must See Tours of Summer” a couple months ago, his last CD debuted at   #3 on Billboard’s Country Albums chart, his album was chosen by Playboy magazine as the Best Country Album of the year, and he cured cancer (OK, that last one is a lie). Cross Canadian Ragweed will open the show. Now go! Run! Get tickets (at all Vallitix outlets) before they sell out!

Glen Starkey, for those times when you’ve completely exhausted all other possibilities. Tell him he’s your last pick at gstarkey@newtimesslo.com.

Recently reissued on vinyl, label Light In The Attic rescues Karen Dalton’s debut from out-of-print obscurity, offering It’s So Hard To Tell Who’s Going To Love You The Best to a public that may finally embrace her eccentricity. With a distinctive and beguiling voice, Karen Dalton echoes Billie Holiday’s muted voice and phrasing, which was not the conventional smooth resonance of other folk singers in her ‘60s Greenwich Village scene. But with the quirky, idiosyncratic works of Devendra Banhart and Joanna Newsom pushing open the boundaries of Americana, Dalton’s sultry blues and bruised heartache now simply seems ahead of its time. Her cover of Otis Redding’s “I Love You More Than Words Can Say” is rendered completely unfamiliar, as she lingers longer on sentimentality within the crannies of the words. With Dalton recording her covers in a single take, the album exudes a late-night ambience, as she unwinds her spirit around ten compositions that she makes her own. Best reissue of the whole year.

Continuing its mission to uncover forgotten and displaced garage rock and early psychedelia, Rhino Records focuses its narrow gaze on the City of Angeles in the second half of the ‘60s. Tracing the movement of LA music away from studio-produced schmaltz and songs about cars and waves, Where The Action Is traces the arrival of the eclectic range of sound that spilled out of Southern California. The four disc sets covers the musicians that began to shake up the scene on the Hollywood Strip (the Byrds, the Doors, Love) to the kids in the suburbs who jived just as hard (Thee Midniters, The Electric Prunes) and the arrival of the canyon-rock and its psychedelic off-shots (Tim Buckley and Van Dyke Parks). Chronicling not just Los Angeles music, the accompanying liner notes highlights the AM stations that influenced the generation (KHJ, KBLA, KRLA) as well as a homage to the clubs that showcased the talent (Pandora’s Box, The Ash Grove). An archeological treat for folks from SoCal, you’ll now know all the bands your dad still mentions.