It's all about humanity

Dan DeVaul is a thorn in the county's side, but he has helped the people that others cannot... or will not

When you fall through the cracks in SLO County, you land in Sunny Acres. At least that's what Dan DeVaul hoped; that the people sleeping in creeks, shut out from the shelters, and too broke to afford care and treatment would be able to come to his farm to work, eat, get a shower, and get sober. But the county has shut down Sunny Acres, and now the 73 residents who called it home have to move on. Where they'll go nobody really knows.

#Dan DeVaul is idealistic and stubborn to a fault, and heâ€™s driven by his empathy for his residents because he himself once suffered from alcoholism and drug addiction.

You can see DeVaulâ€™s SLO ranch from Los Osos Valley Road. Cars, old and new; twisted metal; wine casks; ag equipment; and random junk litter the property and trees hide the cluster of old campers that once housed over 70 recovering addicts and alcoholics.

Old, beat-up bodies and parts of cars surround DeVaulâ€™s barn. It looks like a junkyard, but when you get closer and look inside you see the many antique cars that he has restored. Thereâ€™s a yellow Model T convertible, a white VW bug, a black Model T thatâ€™s getting a new interior, and several others looming in dark corners of the collapsing barn.

One of the cars, a red roadster, has special meaning to DeVaul. He was only weeks away from restoring it when the owner, a longtime friend who was suffering from cirrhosis of the liver, died after relapsing into a bottle. Now the roadster sits in the thruway of DeVaulâ€™s barn, still waiting for attention.

That was years ago, and now DeVaul is concerned about losing more friends, he said. Most of the residents of Sunny Acres have already packed up and moved on.

â€œThereâ€™s a class of people who have fallen through the cracks, people with mental health issues that arenâ€™t bad enough to incarcerate,â€? said DeVaul. â€œWhere are these guys supposed to go? What are they supposed to do?â€?

DeVaul is quick to rant about the county and his neighbors who complain about him. He walks around his ranch with a limp, the result of a dune-buggy accident in the wild days of his youth when he was drinking and using. Around that same time, when DeVaul was in his late 20s, he had a heart attack. He said heâ€™s surprised heâ€™s alive today â€” sober for the last 20 years. He can slip between laughter and distress in a second while recalling old friends and the current state of Sunny Acres. Heâ€™s often very frustrated.

â€œIt was only a matter of time until they lowered the boom,â€? he said. â€œYou donâ€™t take fragile people in recovery and start putting them through this shit.â€?

DeVaul was born and raised in San Luis Obispo and, except for some time in Phoenix, Ariz., where he built affordable housing, heâ€™s pretty much been here all his life.

For years DeVaulâ€™s property has been a thorn in the side of the county for many reasons.

There was the saga of the illegal motorcycle racetrack. Dirtbikers paid DeVaul $15 to race around a track on his property, which ticked off the neighbors because of the noise.

Then there were the sagas of the dead cow, left rotting in one of his fields; the illegal grading project, which some say deposited silt into Laguna Lake; and the illegal sale of wine casks. Currently itâ€™s the Sunny Acres saga, the unlicensed clean and sober living facility that has been on the countyâ€™s mind for several years. 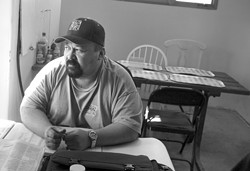 #At its peak a year ago, Sunny Acres was home to 73 people. It attracted people who could not or did not want to get help elsewhere. People like Laura Knox, who wanted to get clean but couldnâ€™t afford to spend the $700 a month to stay at more expensive clean and sober facilities. Sex offenders who could not find anywhere else to live came to Sunny Acres, as did those who had maxed out their time at other shelters. But no longer.

The Department of Planning and Building has lowered the boom on Sunny Acres for its failure to come into compliance with numerous violations, which include various complaints over noise, environmental damage, and too many projects done without permits. County supervisors issued a nuisance abatement to Sunny Acres for the violations.

â€œUnfortunately, Dan DeVaul is responsible for putting these people in jeopardy,â€? said Mulholland. â€œI hold him responsible; heâ€™s thumbed his nose at the law.â€?

It was about three years ago when Art Trinidade, chief investigator for the SLO County Department of Planning and Building, became aware of Sunny Acres and started what has become a long working relationship with DeVaul. DeVaul purchased the property in 2001, before he was renting the same property.

â€œDan has a history of noncompliance,â€? said Trinidade. â€œHe has no strong interest in being told what to do.â€?

Trinidade, who described DeVaulâ€™s facility as essentially an unlicensed trailer park, has become the point man for the county Board of Supervisors, Drug and Alcohol Services, and his own Planning and Building Department on all things Sunny Acres. I was referred numerous times to Trinidade by all arms of the county for all Sunny Acres inquires. Which raises the curious question: Why has the chief investigator for the Planning and Building Department assumed the key role in what is essentially a health and human services issue?

Perhaps because Trinidade is the only person representing the county whom DeVaul has come to trust and respect. Perhaps no one else from the county is willing to deal with it.

â€œIt is not a zoning issue, itâ€™s a health and human services issue,â€? said Trinidade. â€œBut if nobodyâ€™s going to do anything, then someone has to step up to the plate.â€?

#DeVaul said he was providing a service that no one else did. Even though there were other clean and sober living facilities in the county, Sunny Acres was affordable and offered a different living environment. Residents at Sunny Acres were allowed and encouraged to work on the farm. Some were encouraged to take ownership of the organization.

It was the residents who built the dormitory from the ground up.

While the residents were putting up the barn, DeVaul put one named Jesse in charge of building the stairs. With no construction experience, Jesse was instantly overwhelmed and admitted defeat.

It took him weeks, but Jesse bucked up, built the stairs, and has been living sober at Sunny Acres ever since.

â€œItâ€™s done the world for me, it saved my life,â€? he said. Now Jesse is the bookkeeper at Sunny Acres.

This human element at Sunny Acres is exactly whatâ€™s allowed the county to tolerate DeVaul and his refusal to come into compliance with the laws for so long, said County Supervisor Shirley Bianchi. DeVaul doesnâ€™t deny that he broke the rules, that he wasnâ€™t up to code and didnâ€™t get the right permits for the various projects like the barn, but a scene was created that DeVaul was somehow above the law â€” a sentiment that he echoes. He knows that heâ€™s not following the rules, but he just plain doesnâ€™t care because heâ€™s helping people.

â€œWe been trying to work with Dan DeVaul for three to four years to get him to comply with basic regulations,â€? said Bianchi, on whose district lies the DeVaul property. â€œTo this minute Iâ€™m not sure if he wouldnâ€™t or just couldnâ€™t understand.â€?

DeVaul said that because heâ€™s cut corners itâ€™s allowed him to keep the costs down, which undeniably helped countless people who couldnâ€™t afford to get help elsewhere.

â€œThe whole problem is, to come into compliance takes a whole lot of money,â€? he said. According to DeVaul, compliance would basically negate his efforts to provide affordable sober living. Staff members at Sunny Acres regularly drug-test residents and conduct 12-step meetings.

According to the Economic Opportunity Commission (EOC), on any given night there are between 2,500 and 4,000 homeless people in SLO County. The EOC operates the Maxine Lewis Memorial Homeless Shelter on Orcutt Road in SLO. Last Year, the EOC found permanent housing for 298 people. The shelter offers 49 beds a night, with an additional 30 for children and families offered through an inter-faith coalition. But thereâ€™s still some who have maxed out their time at the shelter, and some, like sex offenders, who are not allowed.

Fredrick Chaney, director of another local clean and sober living facility, said thereâ€™s a lot of compassion in the community, but â€œwe do have a problem in this county; a huge problem. [And] we could use a lot more places.â€?

Chaney, who has worked closely with Sunny Acres, said, â€œThe concept [of Sunny Acres] is good, but when thereâ€™s rules you got to go by the rules.â€?

For years Sunny Acres existed in a strange state of limbo, openly operating without a license while fighting off various regulations from the Department of Planning and Building. Of the 73 people who paid $260 a month to live at Sunny Acres, six have been placed in other living situations.

Laura Knox, manager at Sunny Acres, had been representing the facility at county Police and Corrections Team (PACT) meetings since the PACT program was initiated six months ago. Parolees are required to attend a PACT meeting, which are organized by the Department of Corrections. The meetings introduce parolees to those who can provide services like career counseling, drug and alcohol counseling, medical and dental, and halfway houses. At the PACT meetings Knox talks to parolees about the services offered by Sunny Acres.

#Knox is another Sunny Acres resident who credits her sobriety and success to DeVaul and the organization he set up. Sheâ€™s off probation, off parole, has a license, has a bank account, and made honors at Cuesta College this past fall. She attributes her sobriety to Sunny Acres, gushing about DeVaulâ€™s generosity and compassion while the grizzled old man leans against the wall nearby, nonplussed.

Knox and DeVaul have a three-step plan to make Sunny Acres a legitimate care facility. The first step is to come into compliance with the code violations. Second, find the most effective and cheapest way to help people; and third is to look for funding from outside sources. This will include seeking donations of all types.

The problem is they might have already found the cheapest and most effective way to help people â€” it just wasnâ€™t lawful though.

â€œTo me, common sense has to take place over the rules,â€? DeVaul said. â€œI canâ€™t imagine what theyâ€™re going to do with all these people.â€?