Mark Bryan unleashes a circus at the Steynberg Gallery 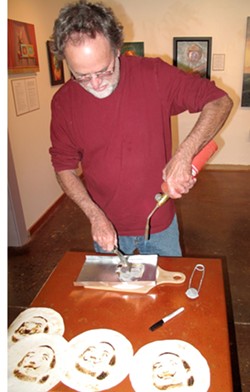 You never know what you’re going to find at the Steynberg Gallery. It might be a man blowtorching Salvador Dali’s visage onto a tortilla. Or a new line of cell phones manufactured by Lost Horizon, guaranteeing “unlimited minutes for you to talk to your phone until you die.” Churches march on Washington. Monkey apprentices saw magician’s assistants in half. At least, all of these things happen when Mark Bryan puts on a show, as he is now through Jan. 15.

The satirical painter’s show, “Hard Times,” probably isn’t going to make you feel a lot better about the economy, or the nation’s prospects for a happy future. But it will make you laugh.

“People who see my art before they meet me, they talk to me for a while and they seem disappointed,” said Bryan, while torching up a tortilla. (The Salvador Dali tortillas are actually pretty easily explained; he wanted to create a miraculous apparition, not unlike those in which the Virgin Mary appears to people in a grilled cheese sandwich, with an artist.)

The centerpiece for the exhibit is a 44-inch-by-72-inch painting titled “The Republic of Suicide.” The Lincoln Memorial oversees a scene of madness in which military vehicles parade down one street in Washington while churches armed with tanks demolish the Supreme Court on the opposite street. Civilians morphing into sheep stare at their cell phones and Blackberries, and no one seems to notice the orange mushroom cloud seconds away from destroying them all. In the right corner, gallery owner Peter Steynberg warms his hands by a fire; Bryan asked friends to model as the civilians in his work. It’s Bryan’s vision of the United States, or at least his vision of the direction it is approaching.

A lone artist, a hopeful figure in Bryan’s mind, observes the chaos. The lyrics to Paul Simon’s “American Tune” are posted beside the painting. “And I don’t know a soul who’s not been battered. I don’t have a friend who feels at ease. I don’t know a dream that’s not been shattered, or driven to its knees,” the song proclaims, the perfect anthem for hard times in a country that may have seemed blessed and indestructible until recently. The piece, painted in 2009, is accompanied by The Republic of Amnesia, the first two of a series of republics. Pushing forward with many of the same themes, Amnesia features a row of arcade booths, each with a television on the waterfront looking out to the Statue of Liberty. In front of each television sits a clown paying rapt attention to the television. A skeleton on a unicycle juggles skulls. 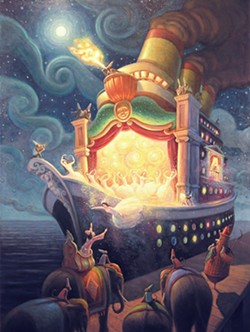 “It seems to be the general trend that this country is becoming less informed, with no sense of history,” Bryan said, by way of explaining the republics series. “That tends to create a population that’s only in the moment, that’s only focused on what’s right in front of them. The dead people [in the painting] are actually more lively; they’re having more fun.”

Bryan turned to more than canvas to express these opinions. A row of wooden cell phones, labeled Lost Horizon Cellulose Phones with a price tag of $35, mingle with the paintings. The painter created his first cell phone several years back; his wife was teaching an ESL class and the students needed props for instructional skits. But this marks the first occasion that the cell phones have been displayed in conjunction with an exhibit and they’re selling like hotcakes. The cell phone screens consist of miniature prints of Bryan’s work, and the “GPS” technology is comprised of phrases like “You are Here Now” and “Don’t listen to the monkeys. Be here,” written in ink on the phones.

Part of Bryan’s frustrations with technology stem from an observation he made several years back while attending the Mavericks Surf Contest. While the crowd had, ostensibly, gathered to watch the surfers, the majority of the viewers were walking around with cell phones perpetually strapped to their heads.

Continuing with his theme of political and economic hardship, one of Bryan’s newer pieces, The Grateful Dead, is also on display. Playing off Norman Rockwell’s iconic image, Freedom From Want, Bryan created a holiday dinner scene featuring a family of grinning skeletons. Bryan took the economic concept of bare bones to the extreme; in his image there’s no meat on anything, not even the people.

If it weren’t for the bizarre figures, Bryan’s picturesque fantasy landscapes might almost be mistaken for a Rockwellian portrait of idealism and serenity. But not all of his images are directly tied to large-scale social, economic, or political strife. Some look inward. Bryan admits that “Poor Edward” was painted while he was feeling low, and inspired by a Tom Waits song. Rather than pay a therapist, Bryan splashed his woes onto a canvas and, he jokes, inflicted them on everyone else.

The Assistant is the portrait of workplace incompetence, with a monkey sitting on top of a magician’s box. The assistant inside the box looks concerned as the monkey, holding a saw, solemnly offers her one last cigarette.

“The magician’s not around and he’s going to do the trick, but he never understood that the magician doesn’t actually do the trick,” Bryan narrated, with a chuckle.

Initially, Bryan began painting “Monkey on His Back” as a portrait of drug addiction. A hunched, glaring figure, masked and hooded, is encumbered by a monkey clinging to his back. The monkey’s expression is unreadable, blocked by a luchador mask. The individual was inspired by the classic commedia dell’arte figure, a jester figure that represents the everyman, who is acted upon throughout the tale. Over the course of painting, the monkey came to represent any issue or subject that sticks to the roof of the brain and refuses to be dislodged.

The luchador mask appears in “El Ataque” as well, on a wrestler leaping out of a tree upon an unwitting clown juggling fire. The landscape is picturesque, and the clown is happy, winding along a dirt hill, past a tree. All is right in the clown’s world. Seemingly out of nowhere, something is about to disrupt this world. Whether people have a right to feel ambushed by political and economic difficulties they had a hand in creating, it’s a whimsical depiction of trouble in paradise.

Fans of the ever so unlikely happily ever after need not avoid the Steynberg Gallery until mid-January. Bryan’s “When My Ship Comes In” is as optimistic and Disneyesque as his paintings are likely to become. A troupe of fairytale ballerinas on a brightly lit ship greets a prince waiting for them on the dock. Moonlight, elephants, monkeys blowing fire into the night, and a primate violin-player create an atmosphere of fantasy and beauty. Not surprisingly, the painting sold quickly.

“There’s a sort of archetypal concept in people that some day everything’s going to be great—when I win the lottery, when I find true love. It’s a pretty hard thing to represent because everybody’s ship is different,” admitted Bryan.

The Steynberg Gallery isn’t a bad place to await your ship o’ dreams. After all, they’ve got tortillas and lattes. And monkeys and clowns. And you never know what you’re likely to see next.