It's boom time in Paso Robles

Castoro stands as a pioneer in the exploding region

The latest business study on Paso Robles reported 217 bonded wineries, making it unimaginable that the region had only four wineries in 1979. Of course, some new brands are second labels from established wineries and half of them don't own wineries (Paso custom crush facilities house dozens of brands). But I was impressed at recently discovering that pioneers like Eberle, Justin, and Castoro welcome the influx of newcomers. They realize just how much new talent adds to Paso Robles' prestige. 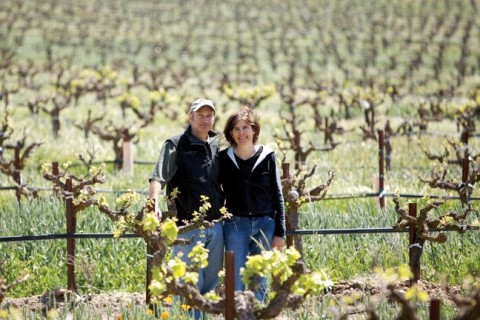 # Whether they're new or old, Paso wineries have captured the attention of mainstream media, including Sunset, Wine Spectator, and the L.A. Times. Whenever these pages highlight any winery, they all receive scores of new visitors. Recent stories had me reflecting on our foresighted pioneers who've withstood the test of time. Among those at the forefront of Paso's evolution are Niels and Bimmer Udsen and winemaker Tom Myers of Castoro.

Now approaching their 25th anniversary, they've provided an amazing array of quality wines at value prices over the years. The Udsens owners and operators who founded Castoro Cellars in 1983 made it their goal to produce premium wines that reflected the quality of Paso Robles' various wine regions. Their commitment and success shines on their peers and the region as a whole. Today, the Udsens and Myers remain just as committed to their original goals as when they started in the area in the late 1970s.

Tom earned his Masters in biological science/botany at Michigan State University, then moved to California where he earned a Masters in food science with an enology/viticulture focus at U.C. Davis. Following graduation in 1978, he settled in Paso, where he was hired at Estrella River Winery, the region's largest producer at the time. (Now it's Meridian.)

"There were only four wineries at the time: HMR, Pesenti, York Mountain, and Estrella [River]," recalled Myers, who provided Niels' first winery job at Estrella and became his mentor, teaching him everything about the production side of winemaking. Niels' interest in wine began after graduating from high school.

He'd moved to Italy, where he earned an appreciation for wine without the pretentiousness associated with it in the states. Niels realized wine was an integral part of the daily meals and that it was available to every person, rich or poor. He returned home to study agribusiness at Cal Poly and became further intrigued by studies on the wine industry. Needless to say, he decided to follow his interest in winemaking. Niels was hired at Estrella in 1981 by Myers, who taught him everything about production. That year he also married Bimmer, a native of Denmark, where Niels' father was born.

His Estrella experience motivated the Udsens to start their own winery. Niels made his first wine there in 1979 but uses 1983, the year they established their brand, to note anniversaries. They chose Niels' nickname "Beaver" "Il Castoro" in Italian which prompted their jovial motto "dam fine wine." Although they never take themselves too seriously, Niels and Bimmer adhere to the philosophy he learned in Italy: that quality wine should be available to every consumer.

Niels explained that Myers didn't become head winemaker at Castoro until 1990, but he said of his mentor, "Tom was always involved in each vintage in some way."

Myers, on the other hand, is one of the rare winemakers who says he's not interested in starting his own brand.

"Niels keeps me busy enough as it is," he said, grinning.

"When we started, people thought we were too young and they'd ask, 'Do your parents own this winery?'" Niels reminisced. "Now I get, 'What industry did you come from?'"

Although their sons, Luke and Max, are 18 and 21 now, Niels said they're not joining the family business yet.

For Niels and Myers, winemaking at Castoro has always been a collaborative effort. Their assistant winemaker, Mikel Olsten, has been with them for more than 20 years. The team is well-known for its unique blends, but they only started offering them in 1993.

"In the early years, we didn't make blends," said Myers, who was honored as 2002 Winemaker of the Year by the California Mid-State Fair. Niels explained: "For our 10th anniversary, I asked Tom for something special the best Paso Robles red blend we could make and I wanted Zinfandel in it."

They were among the region's first wineries to create a proprietary red blend that carried the distinct signature of the winemaker and the appellation Diciannove Anni the Italian translation of Castoro Cellars a blend of Cabernet Sauvignon, Cabernet Franc, Petite Sirah, and Zinfandel that changes annually, but always includes Zin.

They wouldn't dream of resting on their past successes, so Niels and Myers are now dedicated to improving and expanding Castoro's vineyards. The Udsens have always been good stewards of the land, which motivated them to utilize sustainable farming practices in the vineyards and winery. Although they've farmed organically many years, they're currently applying for organic certification through their vineyard manager, Bob Thomas of Mesa Vineyard Management.

He chose Mesa for its expertise in quality management and solid reputation. Thomas has been in vineyard management since 1973 and as said in the industry great winemaking starts in the vineyard. Niels said it took about three years to work out the technicalities.

"The wines improved," Myers pointed out.

Although they now own several vineyards, they still buy from other growers they purchased grapes from when they started. Niels explained that many vineyard sources provide the winemaking team greater flexibility in creating consistently good wines every harvest.

Although they offer excellent Chardonnay and Pinot Blanc grown at Bien Nacido Vineyard in Santa Maria Valley every year, they're experimenting with growing aromatic whites like Viognier and Gewurztraminer in the estate vineyards.

You can reach New Time's Cuisine columnist at Kathy@GrapevineRadio.net.