It's citrus season, and while most fruit tree owners are willing to share their abundance, ask before you take

Marcia Coryell doesn't have much of a green thumb, but when she moved into her house on Southwood Drive in San Luis Obispo about 23 years ago, she was excited to reap the benefits of the lemon tree that had long been planted in her new backyard.

She also has an avocado tree, persimmons, oranges, and limes. But the lemon tree is special to Coryell because it produces so much more than just fruit. 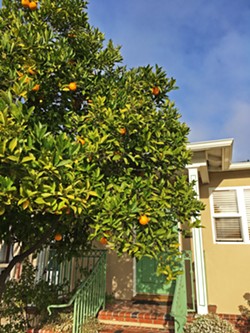 "It's been a lot of entertainment too," she told New Times.

Every citrus season Coryell's lemon tree grows an abundance of everyone's favorite sour yellow fruit, and for years she's watched silently from her window as grown adults rip lemons from the tree's branches, stuff them into their pockets and purses, and stealthily walk on as if no one's the wiser.

Her backyard butts up against a popular public walkway, and although fencing surrounds her land, a portion of Coryell's lemon tree hangs over the path. Most years, the side of the tree facing Coryell's house is completely filled with fruit, while the other side is stripped bare.

Like many fruit tree owners, Coryell doesn't usually mind when passersby help themselves to a small share, or when neighbors in need come knocking. The tree takes so little maintenance and is so prolific that even when people steal, Coryell said she's still left with too many lemons for any one person.

Once her entire tree was emptied of fruit in a matter of hours while she was out running errands. And last year during peak citrus season, she pulled into her driveway one day and saw a woman standing under the tree, in her yard, midway through filling an entire sack with lemons.

Middle-aged and well dressed, the trespasser didn't fit the usual criminal stereotype. Coryell rolled down her window, expecting the woman to apologize emphatically, but when she saw Coryell, she ran.

"It was pretty funny," Coryell said.

Still, she'd prefer it if people would keep off her property. Or at least ask before traipsing through her yard and taking enough lemons to season an army of lobsters. She'd probably oblige.

That seems to be the general consensus among San Luis Obispo's residents who are lucky enough to have their own fruit trees: Ask and you shall receive. Or, if you're afraid to ask, stick to the fruit you can reach from your proper place on the public sidewalk.

There's no way to know for sure how many fruit trees there are in San Luis Obispo, but city arborist Ron Combs' best guess is that there's probably at least one fruit-producing tree per every house within city limits. With about 50,000 people currently living in SLO, that adds up to precisely a lot of trees. In rural areas and on the outskirts of town, backyard orchards are even more popular.

Some fruit trees can be a snap to care for if they're planted in a good spot, Combs said. They come with the same benefits all other trees provide, along with heaps of delicious, pesticide-free food as an added bonus. The downside, he said, is that anyone harboring such a tree is almost guaranteed to be a target for some theft.

With citrus season in full swing, theft is too. Although SLO Police Department Capt. Jeff Smith said police don't get many calls regarding residential fruit theft, about a dozen community members complained about recent tree raids in a Jan. 13 post on Nextdoor.

But with so much citrus in reach, snatching a few is a tempting thought. And with so much fruit on every tree, it only seems fair that tree owners should have to share.

Turns out overabundance is an issue a lot of fruit tree owners face, according to Emily Wilson, interim program manager at GleanSLO, a nonprofit that harvests excess produce from residential gardens and commercial farms and donates it to the Food Bank.

"I always encounter people who are like, 'I just wish people would take this fruit,'" Wilson said. "So that's what we're here for."

GleanSLO started a little more than a decade ago when a small group of residents decided something had to be done about all the wasted fruit in backyard orchards. They'd noticed that fruit from many local trees was left to rot.

"There is so much abundance here, and it's not really being used."

So, Wilson said, the group partnered up with some neighbors, gathered the leftover fruit from a few trees, and donated it to those in need. Eventually, they registered as a nonprofit and joined the Food Bank Coalition of SLO County.

Most of GleanSLO's calls come from homeowners who are overwhelmed with their backyard gardens and orchards, Wilson said.

She has a productive lemon tree and two lime trees in the front yard of her SLO home. Every citrus season, Bolyanatz leaves a box filled with lemons and limes outside her front gate for anyone to take. And if the box isn't out and someone asks, Bolyanatz is happy to clip some fruit off her trees to share.

"We totally don't mind," she said.

But one day several years ago, one passerby knocked on Bolyanatz's door and asked to take the whole box of free lemons she'd left out that day. She said it was fine and didn't think much of it until later that day when she returned home after grocery shopping to find that every lemon from her tree—probably 300—had been stolen.

She never found out who took all those lemons or if it was the same person from earlier that day, but she hopes it never happens again.

"I just think most people with citrus trees are totally willing to share because we have way more than we need," Bolyanatz said. "But we would just like to be asked." Δ