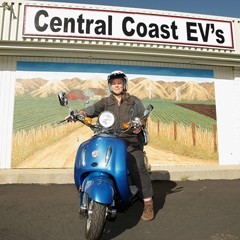 There are two things a person should know about electric vehicles: first, electric scooters and bikes are pretty affordable, considering the cost of gas, insurance, and parking—even for students. And second, they’re not dorky; modern scooters are the green alternative to bulky cars and trucks. And green is cool. Enter Central Coast Electric Vehicles.

SLO may well be an anomaly, having three shops devoted to electric vehicles. Each has a unique niche in the budding industry: the two others sell high-performance or luxury models, and then there is Central Coast EV’s: specializing in super-affordable electric bikes and scooters. Owner Zelma Fishman said an electric bike starts at about $1,000. The most expensive scooter is about $4,000, and they cost almost nothing to run.

Central Coast EV’s opened up shop at 796 Foothill Blvd. in late November, after gas prices spiked at $5 a gallon. Fishman said she wants to help people break their car addiction with a clean-running, affordable bike or scooter. Replacing car trips with scooter or bike trips even a couple of times a week could mean big savings, she said. The rides at Central Coast EV’s cost only pennies to charge and (depending on the model) can roam 25 to 60 miles between charges at up to 55 miles per hour.

Fishman said she is an environmentalist, and wanted to make a positive change, starting with the way we get around. With the oil war in Iraq, climbing gas prices, and cluttered streets, she decided to promote electric vehicles.

“I want to provide a service to the city,” Fishman said. “Something like this can help the community be more resilient during the next gas shortages.”

Fishman sells two different models of electric bikes at Central Coast EV’s (one has a larger battery than the other), which both have a range of about 25 miles and sell for $1,099 and $1,199, respectively. Fishman said she drives the larger model. She also sells four different types of scooters that start at $1,599; the deluxe version costs $3,999. Fishman welcomes test drives.

Central Coast EV’s is open Monday through Saturday (and sometimes Sunday) from 11 a.m. to 5 p.m. (and sometimes later). Visit them online at centralcoastevs.com or call 549-7818.

Stephanie Baisa Wilson will be presenting a free Postpartum Depression Roundtable on Tuesday, March 17 from 9 a.m. to 11:30 a.m. at the San Luis Obispo Vets Hall on Grand Avenue. For reservations contact rozanich@slocap.org. …

Cal Poly seniors are raising money for UNICEF’s Tap Project that helps bring clean water to children in need around the world.
The fundraiser will be held during World Water Week, the week of March 22, at restaurants in San Luis Obispo. Pizza Fusion, Natural Café, and Upper Crust Trattoria are already on board and more restaurants will participate. Restaurants are contributing by asking customers to donate $1 for the tap water they would normally receive for free. The $1 donation will provide a child with clean water for 40 days, or 40 children with water for one day. Illnesses caused by water-borne pathogens are the second largest cause of death for children under the age of 5.

The Tap Project is now in its third year and has been very successful. Last year it raised more than $850,000. The donations raised last year funded water and sanitation programs in Nicaragua, Iraq, the Ivory Coast, and Belize. For more information, call Jenna Miller at (925) 642-4266. …

Paso Robles wine enthusiasts can be transported to tastings in safe style, thanks to a new “hop on, hop off” shuttle service. The Wine Line service will initially travel a circular route in the Highway 46  area in west Paso Robles with stops at more than 20 wineries every 40 minutes. Two other routes are in the works. Owners and operators Jason Westfall and Ricky Fernandez launched the service on February 20. Patrons can board and depart the shuttle as often as they like for $39.95.

Residents of Templeton, Atascadero, Paso Robles, and military personnel will receive a $10 discount. The transport operates from Thursday through Sunday from 10 a.m. 6 p.m. Special arrangements for tours on Monday through Wednesday can be arranged for groups of eight or more. The modern vans run on environmentally friendly biodiesel synthesized by the owners. For more information, visit hoponthewineline.com or call 888-994-6354.

Strokes&Plugs was compiled by New Times staff. Send your business news to strokes@newtimesslo.com.