There’s a lot to like about The Last Five Years, staged at Arroyo Grande’s sweet new performance space The Spot. First, there’s the unconventional trajectory: In front of a New York City backdrop, budding novelist Jamie Wellerstein (Jake McGuire) and aspiring actress Catherine Hiatt (recent high school grad Leanne Gosmeyer) tell us, in song, the story of their relationship over the last five years. But while Jamie’s account marches determinately from past to present, Cathy’s story starts in the present and withdraws, with every scene, deeper into the past. 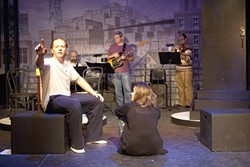 Then there’s the dialogue, mostly delivered in song, often witty and ear-pleasing and at times ferociously biting. There’s Gosmeyer’s comedic skill as the floundering actress who royally sucks at auditions, and McGuire’s believability as the newlywed frustrated by the seemingly sudden influx of charming, attractive women in his life.

Written and composed by Jason Robert Brown, the material is dynamic, unusual, and rich in potential. But what could be an awesome show often feels exhausted by its own ambition. Holding a play together—a musical, no less!—with a cast of two is extremely challenging for the most seasoned actor, especially given that the show’s leading man, Jake McGuire, is also it’s director and producer—and the owner of the promising new venue. He seemed, understandably, tired.

The play opens with Cathy’s angry, sorrowful lament “Still Hurting,” a mulling reflection on the disintegration of the relationship, the kind of thoughts that spring to mind uninvited on a beautiful spring day, triggered by something as intangible as a scent or a song.

She slumps offstage, just in time to miss Jamie’s bounding entrance, belting about the scandal of his love for a Gentile: “I’m breaking my mother’s heart/The JCC of Spring Valley is shaking/And crumbling to the ground/And my grandfather’s rolling/Rolling in his grave.”

Thus begins an intriguing tale in which we are never allowed to relax, always jarred from the bitter end of a relationship to the heady beginning of it, and back. The characters always seem aloof, unable to see one another—separated as they are by their timelines and ideals. The only time the two appear to exist in the same point in time is during their wedding scene. After that brief overlap of coordinates, though, they move steadily, inexorably further away.

Perhaps as a result of overwork, or opening weekend jitters, there were moments when the vocals veered frighteningly off-key, the wedding song harmonies sounding as though the two actors were somehow unable to hear one another—or themselves.

Still, both performers shine in the right light. Cathy’s auditions are downright hilarious, her musical selection morphing into a transcript of her anxieties.

McGuire is wonderful in the whimsical number “The Schmuel Song,” a fairy tale Jamie’s invented about “Schmuel, the tailor of Klimovitch” who is granted unlimited time to sew the dress of his dreams by a benevolent talking clock. Gosmeyer, awkwardly, has no lines in this scene, and relies on her expressive face to communicate her initial rapt amusement—followed by a wave of mistrust as Jamie abruptly turns the tale into a lesson about following one’s dreams.

Soon, they will pass one another by as two weary travelers, headed in opposite directions, but resting a while in the warmth of one another’s embrace.