It's happening at the Clark Center

The Clark Center is starting 2012 off strong, bringing in a diverse selection of performers from all around the world to Arroyo Grande. Check out these sweet events:

On Friday, Jan. 20, at 8 p.m., catch the charismatic, talented, pretty-faced jazz crooner Michael Kaeshammer. Drawing equally from a long list of blues, jazz, and pop standards as from his own growing collection of studio recordings, Kaeshammer’s energetic, highly entertaining performances pay tribute to the early piano greats while sounding totally fresh and original. 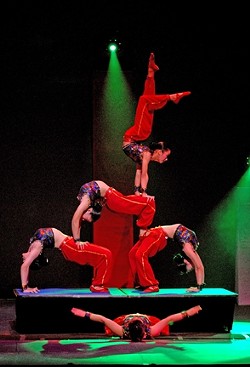 If only normal bodies were capable of what China’s Peking Acrobats appear to do with the greatest of ease: balancing themselves, with a single arm, on a precarious tower of chairs; packing a human pyramid on a bicycle and cruising nonchalantly around; leaping into the air and spinning like a pinwheel, only to land neatly atop someone’s upturned feet. Oh, to be so pliable, so stackable, so indestructible! What the Peking Acrobats do looks for all the world like special effects, but as you’ll see at the Clark Center on Wednesday, Jan. 25, at 7 p.m., these feats of grace and agility are 100 percent organic.

The Clark Center is at 487 Fair Oaks Ave. in Arroyo Grande. For tickets or more information, visit clarkcenter.org or call 489-9444.