The highly anticipated release of Vina Robles Amphitheatre’s inaugural season has been announced, and it’s a doozy! You can read all about it on their website, vinaroblesamphitheatre.com, where you can also buy tickets beginning Friday, May 17, but here are a few highlights: 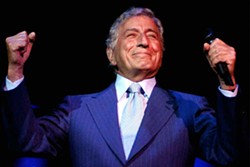 I’m probably most excited to see Tony Bennett on Saturday, Aug. 10. I caught him at the SLOPAC a few years ago, and he was so classy, so entertaining, and so well preserved! The man’s 86, but he’s clearly well cared for!

Steve Martin and the Steep Canyon Rangers featuring Edie Brickell also have me feeling ants in my pants. A hot Paso night on Tuesday, Oct. 8, while listening to Martin on banjo and Brickell singing? Sounds like heaven to me.

Now go get those tickets!

Go with the Flo

“On the charts and at the ballot box, these slogans had an effect,” according to the band’s press materials for their new album, Survival Story. “The mood of the populace shifted. Now, those murals have begun to crack and fade. People are taking a closer look at what’s behind the slogans, and seeking to come to terms with what they find. Exhaustion. Hypocrisy. Ego. Frustration. Quagmire. Wars with no exit strategy. Lifestyles that are non sustainable. American flag bandanas made in China. Everywhere, we are encountering limits. Enter the Flobots once more. The situation is more complicated now. The populace is cautious and jaded. The old slogans will not suffice. What is needed is a new story. Survival Story is a vision of hope for a world facing its limits. While others revel in the dystopian, the Flobots remain committed to their ability to rise together. Navigating the coming years will require new tools. It will require narratives that cause us to reexamine our priorities, redefine wealth, and re-inspire ourselves. It will require that we come together in the face of death and write the story of our own survival.” 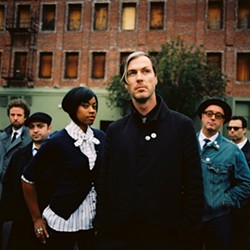 Martin Sexton returns to the Brew on Saturday, May 18 (doors at 7:30 p.m.; 21-and-older; $20 presale or $22 at the door). This dude is an awesome singer-songwriter who was born in New York but cut his teeth busking in Boston, where his debut collection of demo songs sold 20,000 copies out of his guitar case. John Mayer, no slouch himself, called Sexton “The best live performer I’ve ever seen.”

Did you dig the soundtrack to the film The Commitments? If you did, you’re going to love this next act: British R&B act The James Hunter Six brings their ultra-tight sounds to the club on Sunday, May 19 (doors at 7 p.m.; 21-and-older; $20 presale or $23 at the door), with Jonah Smith opening. Hunter’s new album, Minute By Minute, was produced by Gabriel Roth (Grammy-winning engineer for Amy Winehouse’s best-selling album Back to Black) and stays true to Hunter’s love of  ’50s and ’60s R&B.

Come Monday, May 20, get your hip-hop fix with Mobb Deep (doors at 8 p.m.; all ages; $18 presale or $20 at the door), with M Shah opening. Fronted by Havoc and Prodigy, Mobb Deep formed in 1986, originally calling themselves Poetical Profits. They’ve since released nine albums.

Sons of Fathers hits the Brew on Tuesday, May 21 (doors at 7:30 p.m.; all ages; $8 presale or $10 at the door). The Texas band features soulful picking and tight vocal harmonies delivering Americana sounds. 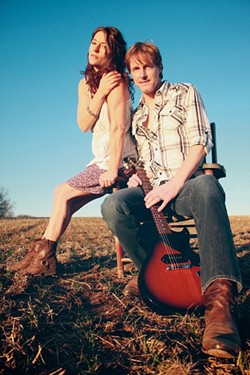 Honky-tonk heroes Jackson Taylor & The Sinners play Wednesday, May 22 (doors at 8 p.m.; 21-and-older; $10 presale or $12 at the door). These guys are storytellers all wrapped up in outlaw country sounds.

And I’d recommend buying tickets early if you want to see British blues icon John Mayall when he plays on Thursday, May 23 (doors at 7 p.m.; 21-and-older; $23 presale or $25 at the door), with the Dani Page Band opening.

Don’t forget about the first show at Cal Poly’s Rec Center in six years! On Thursday, May 16, Otter Productions and New Rock 107.3 present “No Big Deal,” a radio show with five bands: Awolnation, Fitz and the Tantrums, Wavves, Robert Delong, and Iamdynamite. Doors open at 6 p.m., and tickets are available at all Vallitix locations, by phone at 1-888-825-5484, or online at vallitix.com.

Baltimore couple Jen and Scott Smith—aka Naked Blue—are bringing their folk pop sounds to the SLO Down Pub on Thursday, May 16 (6:30 p.m.; all ages; free), as well as to Sculpterra Winery on Sunday, May 19 (1 p.m.; all ages; free). According to press materials, “They quit their day jobs in 1991 and have been writing, recording, and performing music ever since.” David Carroll, Nashville’s Mare Wakefield and Nomad, local favorites Girls & Boys, and New American Farmers will also play May 16. Nicole Storto and Paul Knowles—aka New American Farmers—are rolling through Arroyo Grande to support their new album Everywhere. The group certainly likes to have a little fun. Check out their cover of ELO’s “Can’t Get It Out of My Head” on YouTube. Classic! The show starts at 6:30 p.m. and is free. Dulcie Taylor, Steve Kindel, and L.A’s Kevin Quinn (a Disney staff writer who wrote a love song for Mickey & Minnie’s anniversary) also play May 19.

Four performers are donating their services to raise money for a very worthy cause. On Friday, May 17, Cloverton and opening acts Vivid Simplicity, 7th Day, and Loren Radis play a fundraiser for Brighten a Corner, a local charity raising money to help a local family make their home handicap accessible. According to the charity’s website, the family’s young son “recently had radical brain surgery to correct life threatening seizures brought on by cerebral palsy.” Thankfully, his seizures are gone but his home desperately needs modification. The concert takes play at Mercy Church in SLO (710 Aero Vista Drive). The doors open at 5 p.m., the music starts at 6:30, and there’ll be a bake sale, silent auction, and more. Enjoy some great music and help a kid out! Presale tickets cost $8 (available online at brightenacorner.com), or are $10 at the door. Spend $20 and get front row seating and a dessert reception with the band!

On Friday, May 17, from 6 to 9 p.m., head to Villa San Juliette Vineyard to hear surf and reggae rockers Headshine hosted by Nigel Lythgoe and Ken Warwick (producers of American Idol and America’s Got Talent). Bring a blanket or low-back chair. Wine will be available for purchase. Tickets cost $35, or $25 for wine club members. Reservations are required: 467-0014. Then, on Sunday, May 19, Headshine plays from noon to 4 p.m. For more info, call 237-7848. Adam Levine & Danny Weis play D’Anbino Tasting Room on Friday, May 17, at 8 p.m. These two dynamic guitarists come together for a night of creative collaboration. According to the concert promoter, “Levine has done session work for artists on Capitol, Warner Brothers, and Motown Records, and was an instructor and director at the Grove School of Music in Los Angeles for 13 years, where he taught guitar for the National Guitar Workshop. He is currently the bandleader for the Central Coast’s own Human Nation. Danny Weis was cofounder of the ’60s group Iron Butterfly, as well as the super group Rhinoceros. He appeared as Bette Midler’s guitarist in her 1979 film The Rose, which received six Academy Awards. He has worked with the Everly Brothers, Alice Cooper, and Jimi Hendrix, as well as many more. Adam and Danny will be backed by Bruce Beck on keyboards, Danny Pelfrey on sax, Bill Wingfield on bass, and Daryl VanDruff on drums.” Tickets cost $10 ($5 for Record Club members), and reservations are accepted: 227-6800.

This Saturday, May 18, Laetitia Winery & Vineyard will be host to headlining act Donna Lynn Caskey, a singer-songwriter and clawhammer banjo player who won first place in traditional banjo at the 2012 Topanga Banjo & Fiddle Contest and Folk Festival in Los Angeles. Stephen Styles and Don Lampson will also perform. The show starts at 1 p.m. and is free.

Acoustic soul singer-songwriter duo Genna & Jesse plays two shows on Saturday, May 18, delivering pop, smooth jazz, and Americana roots music from 3 to 6 p.m. in Paso Robles Brewing Company and from 8 to 10 p.m. at Linnaea’s Café. Jesse plays some sweet piano, and Genna has a gorgeous voice and great guitar work. Definitely worth a listen!

On Saturday, May 18, The Young Dubliners will be paired with the fine wines of Broken Earth Winery during a special concert from 7 to 10 p.m. ($30, or $25 for Broken Wine Club members; buy tickets online at brokenearthwinery.com). Unless you plan on dancing all night, guests are encouraged to bring a lawn chair and or blankets. Food and wine will be available for purchase. Bring your PRWCA Wine Festival Pouring in the Park wristband and get a free glass of wine! The Young Dubs formed in 1988 in L.A., although many members are originally from Dublin. They’ve twice appeared on ABC’s Jimmy Kimmel Live! and have had songs on Sons of Anarchy and Human Target. They deliver great Celtic rock’n’roll and Irish folk songs with a twist.

D’Anbino Tasting Room will be host to a Wine Festival Dinner with Indigo Jazz on Saturday, May 18, at 8 p.m. The band features Brett Mitchell (piano), Julia Mitchell (vocals), Adam Levine (guitar), Darrel Voss (drums), and Fred Atwood (bass), and the meal includes a garden salad, white-wine-marinated herb-grilled chicken with D’Anbino sauvignon blanc, herb crusted tri-tip with a trio of sauces, Mediterranean roasted potatoes, farmers’ market vegetable medley, and a berry trifle! Yum! Admission is $55 ($45 for Record Club members). Wine will also be available for purchase by the glass or bottle. Reservations are required: 227-6800.

On Sunday, May 19, the Famous Jazz Artist Series is host to one of its favorites, great jazz guitarist Bruce Foreman, who Jazz Times calls “One of the giants of modern jazz guitar. His solos encapsulate the entire spectrum of the best of jazz guitar.” He’ll play two shows at D’Anbino Wine Tasting Room in Paso Robles: 4 and 7:15 p.m., each for $15; or pay $20 and see both. Call 927-0567 for reservations. 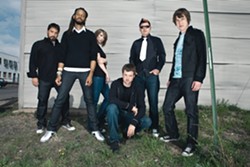 Western sensation Juni Fisher is the featured headliner at Bon Temps Creole Café on Monday, May 20 (6:30 p.m.; all ages; free), as well as the SLO Down Pub on Thursday, May 23 (6:30 p.m.; all ages; free). This award-winning performer (she won 2011 Entertainer of the Year from the Western Music Association) is a real live cowgal who spent her early years training horses and working cow-calf operations. She’s a great performer and storyteller. ∆