It's there inside your mind

A local film festival hosts a Phantom fundraiser at the PAC

There's something undeniably ghoulish about Phantom of the Opera. Maybe it's linked to the fact that Lon Chaney clouded his eyeballs with egg membrane for his role as the phantom in the 1925 silent film. Or perhaps its eeriness is derived from one of the film's most prevalent themes: the exploration of art's dark, seductive side. Whatever the reason, all it takes is the first five crashing notes of the overture to send chills down your spine, which makes the SLO International Film Festival's (SLOIFF) screening of the classic at the Performing Arts Center on Oct. 13 the perfect opportunity to welcome the fast-approaching Halloween with open, shaking arms. 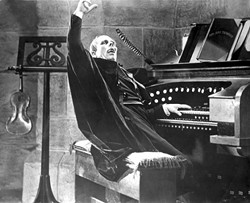 # The original film, based on the French novel by Gaston Leroux, was silent, with actors mouthing arias. In 1929, as sound slowly transformed the film industry, Universal Studios dubbed voices into the arias and reissued the movie. SLOIFF is sticking with the mute classic, relying on live singers and an organist to breathe reality and drama into the well-known tale. Local singers Emy Bruzzo and Marlena Mack will sing the arias, and Los Angeles resident Bob Mitchell will accompany the film on the newly available Forbes pipe organ. The PAC has hosted many shows over the course of its 10-year lifespan, but this festival fundraiser marks the first time the venue will present a feature-length film. The result should be grand not unlike both watching and participating in the phantom's menacing theater haunt. And as thrilling as the venue will be, it's what it can offer musically that promises to make the showing an unprecedented melding of music and film.

The Forbes pipe organ debuted at the PAC this summer, but the 2,767-pipe instrument has been a 20-year work in progress for the county. Made

in Gloucester, Mass., Opus 129 so named by C.B. Fisk Inc., the company that constructed it took an entire year just to tune. According to Wendy Eidson, festival director, Phantom of the Opera's compatibility with the pipe organ is the reason she selected the silent classic. The selection also harkens back to the festival's earlier years, when tried-and-true films were the festival's bread and butter.

"I think, because there are so many film festivals, one of our strengths is that we started as a festival that celebrated classic films," Eidson said. "We like the idea of using old films as part of the festival because we are highlighting the history of film. Also, there's just so many things you can do with silent film, and I think it will be a great tradition to start."

Organist Mitchell will play an important role in this tradition, as the man who's accompanied silent films with his music since 1924. The soon-to-be 95-year-old began playing piano at the age of 4. By the time he was 10, his legs were long enough to reach the organ pedals, and his mother procured pipe organ lessons for him at a nearby Episcopal church. Pipe organs were rare enough that he was lucky to get a few hours of practice each week.

Since he grew up in Sierra Madre, a small city in Los Angeles, Mitchell's family drove to a movie theater in Pasadena whenever they had a hankering to see a film. It was after he had started his lessons that Mitchell realized the theater had a pipe organ. After a brief audition for the theater manager, Mitchell found himself playing Christmas carols between shows. In no time at all, he was improvising music to accompany silent films, something he did five days a week on average between the years 1924 and 1928. He credits his ability to improvise a score with the fact that his parents took him to symphony concerts twice a month between the ages of 8 and 16.

"They used to bore me to death, but all of this music was sinking into my conscious, so I learned to play things by ear and also to make up music. So by the time I was accompanying the movie, I was able to create music that fit the movie," Mitchell said.

As talkies became increasingly popular, Mitchell found himself out of a job but fortunately not without other applications for his musical talent. Over the next few decades, he worked for various churches, training and organizing choirs including his famed Robert Mitchell Choir Boys, who sang in hundreds of films and radio shows and performed across the world and accompanying services on the organ. He also performed, briefly, at the many melodramas that sprang up across Los Angeles, offering cheap entertainment, beer, and pretzels. These particular gigs were short-lived because he never received the pay he was promised.

Despite the unarguable success of sound in film, silent film made a small comeback after decades of obscurity, and Mitchell found himself, practically an octogenarian, returning to his original career as a movie organist.

"We used to think that silent pictures were just a step toward sound," he said. "But there was an art to them and there are certain things that could not be duplicated by sound."

Around 1990, he was offered a job at a silent movie theater in Los Angeles, a job that continues to this day. In addition to weekly performances at the theater, he plays for services at a handful of churches in Los Angeles, and occasionally performs at an Italian restaurant. He finds that his dance card is more full now than it was when he first tamed the pipe organ to express the many moods of film.

Mitchell has used the pipe organ to tell the tale of the phantom and the opera several times before after all, the compatibility between that particular film and the pipe organ isn't exactly a secret. But the two have never been paired at the PAC, especially not with one of the last of the silent film organists. SLO audiences have never felt the silent thrill of the overture, exclaimed in horror at Lon Chaney's disgusting facial adornments, and waited uneasily for the crash of a chandelier to the theater floor. But they certainly should.

Phantom of the Opera will play at the Cohan Center on Oct. 13 at 7:30 p.m. Tickets cost $20 $15 for students and film society members and are on sale now at www.pacslo.org. Proceeds benefit the SLO Film festival.

Arts Editor Ashley Schwellenbach is the New Times Phantom. Keep your hands at the level of your eye when e-mailing aschwellenbach@newtimesslo.com.