It's time to get briefs with 55 fiction

Come on. You know the answer. It’s not even a question. You go with the latter. You go with the tighty-whities. And if you just can’t, your only option is this: briefly in boxers. Yes, brief is better as the ads for this year’s 55 Fiction contest proclaim because, as Shakespeare wrote, brevity is the soul of wit.

Every year for the past 28 years, New Times has called upon the community and beyond to honor that maxim with stories so short, their first name is Martin. Yes, you only get 55 words to express your wildest narrative, be it a dashing tale of medieval knights, a sordid number about Bigfoot’s big feet (you know what they say about feet), or a ribald yarn detailing the exact provenance of that jam stain on your favorite pair of culottes (spoiler alert: it was Bigfoot). 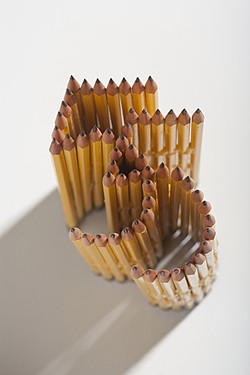 However, while 55 Fiction runs the gamut of the human imagination, from the gross to the graceful, there are some rules. If there weren’t, every story would be a version of the following:

The crowd of onlookers fell into a daze at the sight of this handsome, well-aged man. He was debonair; he was charming; everywhere he set his eyes, sunshine bloomed and babies smiled. His exhaled breath cured all ailments. Even gout. That’s right. It was Tom Hanks.

Don’t do this. No matter how big a fan you are of Big. The big, gotcha reveal at the end may shock or titillate, but it’s ultimately cliché and lazy—two things no story should be.

Instead, aim for clarity and be extremely concise. If Ernest Hemingway could do it in six words (allegedly), you can do it in 55. So go for some conflict, some character, and something unexpected. Some of the best 55 Fiction pieces come out of nowhere, from the deep recesses of the human mind, and manage to make an impact with a memorable image.

“The sidewalk lining Central Avenue is packed, a queu of restless vagrants stretching around the corner. ‘Try substituting the word ‘struggling’ for ‘having a hard time,’ she says. ‘It’s all about the economy of space.’ To the next in line, ‘Spaceship’ should be one word.’ She shakes her head tiredly. So many panhandlers, so little time.”

That’s more like it. Funny. Kinda sad. Strong. A little bit meta. You can just see the protagonist out there on the street, shaking their head with a haughty “tsk tsk” at the bums’ bungled grammar.

Here are some other key rules to remember:

Send your stories to 55 Fiction, 1010 Marsh St., San Luis Obispo, CA 93401. You can also send a digital version to 55fiction@newtimesslo.com. Winners will be published in New Times on Thursday, July 2.

Now that you know the rules, the only thing left to do is write. So go forth, all you wordsmiths, raconteurs, and storyhounds. Just remember: Always go briefs.

To keep it brief, Jessica Peña has left as Arts Editor, but you can contact interim Arts Editor Hayley Thomas at the same email, jpena@newtimesslo.com.