It's time to pick the orange blossoms

Cal Poly Theatre Department invites you to a wedding 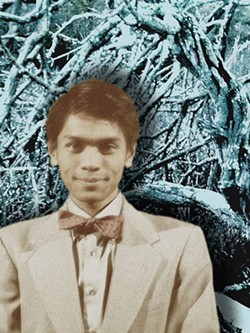 From a plot perspective, Frederico García  Lorca’s play, Blood Wedding, is fairly simple. Boy and girl fall in love, quarrel, marry other people, and ultimately attempt to escape society’s traditions and moral impositions by running away together. But the heart of the play, according to Cal Poly Professor Josh Machamer who is directing the production, is in Lorca’s words, symbols, and imagery. And the difficulty is in speaking Lorca’s poetry without sounding melodramatic, trite, or silly.

“He’s a poet first versus a playwright,” explained Machamer. “We don’t speak in poetry every day. Often one of my biggest notes is ‘you’re not giving full weight to the words.’ We have become lazy athletes of our mouth.”

The challenge for contemporary audiences is to understand the cultural context for Lorca’s play, the first of the wordsmith’s rural trilogy (along with Yerma and The House of Bernarda Alba). Lorca completed the play in 1933, a period of great political turmoil in Spain; in fact, a mere three years later (one month after civil war broke out in Spain), Lorca was shot and killed by Spanish nationalists, his body discarded in an unmarked grave.

In much the same way that violence and political strife called into question individual and national identity, Lorca forces his characters into molds that disallow and punish free will, desire, and passion. In fact, his characters are nameless, designated only by their purpose or social function—la madre (the mother), la novia (the bride), la suegra (the mother-in-law), la criada (the maid), and el novio (the groom). Lorca confers as much humanity upon death and the moon by granting each a role in the drama.

Rather than strip Lorca’s words of their native tongue, Machamer incorporated Spanish into several elements of the play, estimating that 10 to 15 percent of the text is spoken in Spanish, including all of the singing. The entire cast of 13 is taking a Spanish class in conjunction with rehearsals. Originally, Machamer had grand plans for the transitions between English and Spanish; each character would learn their lines in Spanish and English, slipping in and out over the course of the play. This strategy was quickly found to be too ambitious and Machamer and his cohorts decided instead to stage the majority of the play in English, utilizing Spanish more selectively.

Color is also an important aspect of Blood Wedding, as suggested by the vivid imagery called to mind by the word ‘blood.’ Lorca identified each scene by a particular hue, yellow initially, to complement dialogue about wheat, the land, and the sun. Pink comes next, innocence and love. Black, white, and red also lend their own tint to the characters and props, which assistant professor and costume designer Thomas Bernard envisioned as white and pure before the colored lighting makes them otherwise. Bernard points out that divesting a character of color is another method of stripping away their identity. By painting the stage in a monochromatic wash, the characters encompassed within this palette become props.

To further emphasize this point, inactive players sit on chairs lined across the back of the stage, like spare or unwanted furnishings. The wooden floor slopes steeply downward, towards the audience. And when the chairs that fill the back of the stage are empty, the image conjures words like ‘execution’ and ‘inquisition.’ Either is feasible, likely even, within Lorca’s world.

A projection screen behind the stage displays different paintings with each scene, reflecting the significance of Lorca’s relationships with fellow artists, such as Luis Buñuel and Salvador Dalí. At one point Dalí was responsible for the stage settings for one of Lorca’s earlier plays and Lorca’s text exhales surrealist imagery.

“I think in a lot of ways the play is a true conglomeration of his artistic time with these people,” said Machamer.

Although characters are stripped of identity and, by extension, humanity, Lorca’s use of metaphor imbues them with something altogether different—nature. “I had your father, his smell of carnations, for three years and then he was gone,” laments the groom’s mother, a woman who possesses a sturdy quality despite her ceaseless requiem of age, loss, and frailty. Later, she states, “They were flowers, my men—two geraniums.”

The earth is a favorite topic of conversation, and symbol, within Blood Wedding. Possessing land, and the quality and location of the land, are used to assess a person’s worth. And dahlias, orange blossoms, camellias, mountains, and water are accorded the respect of elegantly crafted prose that, unsurprisingly, sounds more like poetry. The language—both spare and boundless—creates the impression of a nonsense world where nothing quite makes sense but, stripped of conventions of reality, everything somehow makes more intuitive sense.

In a lecture that he delivered, titled Play and the Theory of the Duende, Lorca argued that great art is dependent upon three conceits: vivid awareness of death, connection with the nation’s soil, and acknowledgement of the limitations of reason. Each factors into Blood Wedding, but none perhaps so obviously as the first of these. Death stalks the stage throughout the play, maneuvering among the characters, his fingers lingering over a knife’s blade, predatory.

The young lovers cannot conquer Death; they must succumb to social strictures that demand blood payment as forfeit for disobedience. But  language endures, sharper even than death, the skeleton to which culture, tradition, and communication cling. And Lorca uses his  weapon well.

“There’s blood in my mouth,” announces the bride, conflicted. “Each word is shattered glass.”