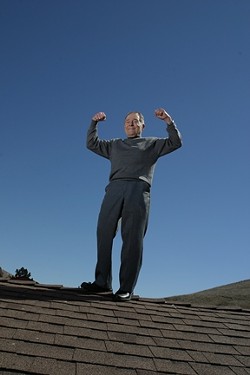 Jack LaLanne, a health and fitness pioneer who originated much of the modern health industry, died Jan. 23 in Morro Bay of respiratory failure due to pneumonia. He was 96.

LaLanne’s career as a nationally known health and exercise guru spanned nearly six decades. In an age when doctors advised their patients that weightlifting might lead to over-exertion and possibly heart attacks, LaLanne popularized bodybuilding and many exercises still common today.

He was known to generations of Americans for his preaching—and selling—of the healthy lifestyle. Many younger people likely remember him from infomercials pitching his line of power fruit juicers. Older folks likely remember him for his line of health clubs and his stunts, such as when he swam from Alcatraz to San Francisco in handcuffs. Many will remember him for his television show, The Jack LaLanne Show, which began in 1951 and ended in 1985. LaLanne moved to Morro Bay in the 1980s.

LaLanne, born in San Francisco in 1914, began his health crusade at the age of 15 when he excluded white sugar and white flour from his diet and began to exercise. LaLanne claimed to dislike exercising, but said he loved what it did for him. ∆