The best way to describe Jackie Greene’s music is Americana, folk-rock, and blues, but there's no denying his music, lyrics, and voice are dripping with soul. Whether he's strumming away solo on the acoustic guitar or backed by his band, the man emotes—and he’s versatile as hell, which is why, in addition to enjoying a commercially successful solo career, he was a member of the Black Crowes prior to their disbandment two months ago and is a member of Phil Lesh and Friends.

Greene was born Aaron Nelson just up the road a ways in Salinas, and he took up the piano at 14, started playing guitar in high school, and soon was sitting in with bar bands at the local brewery. He eventually began writing his own songs, and he set up a garage studio and self-recorded, burning CDs and selling them until he earned enough money to put out his 2002 full length debut, Gone Wanderin’. He was just 22 years old. 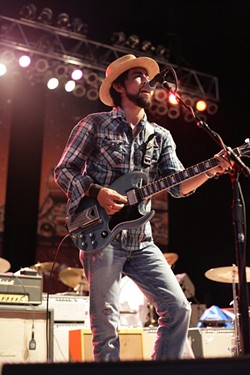 Career highlights include his song “I Will Never Let You Go” appearing in the Oscar-winning score for Brokeback Mountain as well as gigs at numerous festivals such as Newport Jazz, Newport Folk, SXSW, and Bonnaroo, among many others.

“My baby’s got the gentle touch, she got the champagne in her soul/ She’s crazy ’bout candlelight and roses/ She owns her body and her brain but her heart she can’t control/ She’s everything to me and yes she knows it,” Greene sings on “Everything to Me,” one of his many songs chronicling the triumphs and travails of romance.

“Walking down the avenue, seems I’m always running into you/ You got nothing for me, you got no words to say/ But I guess you never did anyway/ And I don’t care about my baby…// There was a time when you cared for me/ Honey, there was a time you prepared for me/ But those days are gone, yes they’re down the drain/ You got to find someone else to call your name cause/ I don’t care about my baby,” Greene laments on “I Don’t Care About My Baby.”

He’s written so many great songs! See Jackie Greene on Wednesday, March 11 (7:30 p.m.; all ages; $20 presale or $23 at the door), at SLO Brew, with Lauren Shera opening with her Americana-indie-folk sounds. She’s touring in support of her third album, Gold and Rust.

Of course, before we get to that Wednesday, SLO Brew’s cooked up a bunch of other great shows starting Thursday, March 5, with The Brothers Comatose (7:30 p.m.; all ages; $10 presale or $12 at the door). I’m not sure if they still do, but the band used to toss inflatable alligators into the audience and hand out chopsticks for audience percussion participation. Playing a revved-up, string-band type of stomp-along country-esque music, these guys put on a fun show, and even better, our own Cuesta Ridge is set to open. 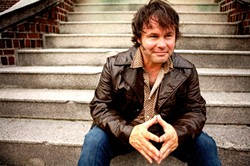 Two of SLO’s best indie blues-rock acts play Friday, March 6, when King Walrus & The Magicians opens for The Ragged Jubilee (7 p.m.; all ages; $12 presale or $14 at the door). Technically, The Ragged Jubilee is now an L.A. band since they headed down there to make it big, but they’ll always be local to me. Both these bands kill it!

If ever there was a time to head out to Los Osos to the Red Barn Community Music Series, this Saturday, March 7, is it! The event starts at 5 p.m. with a potluck supper, followed by a 6 p.m. show with Fiddlestix ($15 at the door).

The contemporary string band is renowned for “fiddle tunes and rowdy old time country classics, singing sweet harmonies and their own original songs,” according to concert organizers.

“Out of the Gold Rush foothills of Tuolumne County, Fiddlestix was a popular fixture of the music scene in the 1980s, and best known as the Host Band of Strawberry Music Festival. Cactus Bob Cole, Dave Cavanagh, and Chris Stevenson, the Prairie Flower, are joined by Chris’ son Michael P. Kennedy. Together, these musical veterans command the stage with a lively, freewheeling combination of driving bluegrass banjo, double and triple fiddles, mandolin, frailing banjo, bass, and guitar. They make and break tradition with their eclectic original compositions, including the infamous ‘Fiddlestix Beer Song.’” 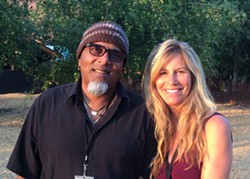 Susan Marie Reeves and Tom Prasada-Rao will headline two Songwriters at Play showcases for the week: Thursday, March 5, at 6:30 p.m. The Shell Café with John Bunzli, Rowan McGuire, and Taylor McCarl; and Sunday, March 8, at 1 p.m. in Sculpterra Winery with John Bunzli, Brent Franklin, and Anson Krekeler. Both shows are free and all ages. Reeves played the 2014 Parkfield Bluegrass Festival with her all-female string band, The Honeysuckle Possums. She also toured six years with Wild Sage. Tom Prasada-Rao was born in Ethiopia, of Indian parents, and raised in Washington, D.C.

Called “So-Cal’s Hardest-Working Blues Band,” high-energy blues-rock group Bo and the Bluesdrivers play two shows in our neck of the woods for the week, starting Friday, March 6, down at Creative Juices in Guadalupe (9 p.m. to 1 a.m.; free); and then Saturday, March 7, at Harry’s Place in Pismo Beach (9 p.m. to 1 a.m.; $5).

L.A.-based Tall Tales and the Silver Lining will play a free in-store at Boo Boo Records on Saturday, March 7, at 5 p.m. in support of their new album Tightropes, which “showcases the classic songwriting, great playing, simple, hook-heavy arrangements of Trevor Beld Jimenez,” according to press materials. “Beld Jimenez grew up on the sounds of ’70s AM radio, along with L.A. classics like Jackson Browne, Court and Spark-era Joni Mitchell, Neil Young & Crazy Horse, and The Byrds.”

Pull on your boots and tip back your hat on Saturday, March 7, when the Clark Center hosts The Swingin’ Cowboys at 7 p.m. (tickets at 489-9444). OBIE Award-winner Jason Petty and Carolyn Martin present this tribute to the music of the American West and songs by Gene Autry and Roy Rogers. Sponsored by K-JUG 98.1FM, this show of Western-themed music, stories, and humor is fun for the whole family.

Powerful vocalist and songwriter C.V. Wells brings his mix of originals and well-crafted covers to Bang the Drum Brewery (950 Orcutt Rd.) in SLO on Saturday, March 7, from 7 to 9 p.m., and it’s free!

“We haven’t played Paso much yet with the Blue Keys, so we’re hoping to let folks know about it,” said Ted “Catalina Eddy” Waterhouse of his Friday, March 6, show at D’Anbino’s. “We had a great swing night up there with the Viper Six on Valentine’s Day.” Catalina Eddy and The Blue Keys play a mix of Delta blues, rockabilly, and roots rock covers by the likes of Muddy Waters, Robert Johnson, Johnny Cash, Elvis Presley, Bob Dylan, John Hiatt, Van Morrison, and Willie Dixon. “It cooks,” said Waterhouse, “and it’ll be cooking this Friday night!” The show runs from 7:30 to 10 p.m. (21-and-older; $10).

The Cal Poly Choirs’ Winter Concert is definitely one for lovers. Called “Romance and the Romantics,” the Saturday, March 7, concert will feature Cal Poly alumna and acclaimed soprano Kathleen Magee Querec performing love-themed songs at 8 p.m. in the Performing Arts Center’s Christopher Cohan Center. Tickets are $12 and $14 for the public and $9 and $12 for senior citizens and students (756-4849).

The Uniqua String Quartet features Brynn Albanese and Emily Lanzone (violins), Peter Jandula-Hudson (viola), and Dave Huebner (cello) and will present music from Bach to Vivaldi and Mozart to Dave Brubeck on Sunday, March 8, at the Unitarian Universalist Fellowship at 2 p.m. ($20 or $5 for students with ID). These four are astonishingly good players, so prepare to be amazed!

The Cal Poly Symphony’s Winter Concert on Sunday, March 8, features student soloists and members of the university’s Orchesis Dance Company performing together at 3 p.m. in Harman Hall in the Performing Arts Center’s Christopher Cohan Center. Tickets are $12 and $14 for the public, and $9 and $12 for senior citizens and students (756-4849). 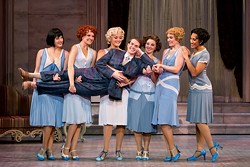 Nice Work If You Can Get It is a classic musical comedy set in the 1920s and replete with “extravagant dance numbers, glittering costumes, and an unlikely love story between a wealthy playboy and a rough and tumble lady bootlegger. This new lighthearted crowd pleaser is set against the backdrop of classic Gershwin hits like ‘Let’s Call the Whole Thing Off,’ ‘Someone to Watch Over Me,’ and ‘Fascinating Rhythm,’” according to press materials. See it Wednesday, March 11, at 7:30 p.m. in the Performing Arts Center’s Christopher Cohan Center. Tickets are $60 to $90 (756-4849). A free pre-show lecture led by Opera SLO’s Brian Asher Alhadeff is in the PAC Pavilion at 6:30 p.m.

From: Red Eye Junction, To: You!

Red Eye Junction’s been on something of a hiatus, but they’re fixing to release a new album on Twang N Bang Records, and to celebrate, they’re giving you a present—a free download of Past / Present / Future available at redeyejunction.bandcamp.com.

“For a country project that started in a SLO garage back in 2007, Red Eye Junction has accomplished quite a lot,” reads their press release about the free download. “Headed by Reid Cain of
Dr. Cain’s Comics & Games, the honky-tonk band has traveled the West and rocked parts of Europe—not to mention every SLO venue you can think of, living or dead.”

This is the band’s fifth album, and a physical copy will be released later, but for now, help yourself to a free digital copy!

“We’ve made some friends, made some enemies. We’ve tried to keep pushing the edge of country music and not just crank out another album that sounds like the last,” Cain said.