After two recent inmate deaths placed the SLO County Jail under a public microscope, Sheriff Ian Parkinson has called for an independent investigation.

Parkinson made the announcement at a press conference held following the death of 60-year-old inmate Kevin Lee McLaughlin, who died after complaining of shoulder pain while in custody at the jail on April 13. It had been roughly four months since another inmate, 36-year-old Andrew Holland, died of a blood clot shortly after spending nearly 48 hours in a restraint chair. Parkinson said he called on the SLO County District Attorney’s Office, as well as the FBI’s Los Angeles field office, to investigate the most recent death as well as any other past deaths at the jail that they believe warrant an investigation. 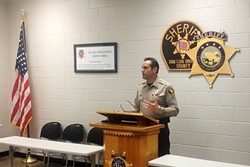 “I need to assure the public that we are an open book,” Parkinson said. “We are not trying to hide something or hold back information.”

Since 2000, there have been 21 deaths at the SLO County Jail. More than half of those deaths have occurred since 2011, when Parkinson was elected. During his press conference, Parkinson noted that the causes of those deaths included a suicide, a drug overdose, and an inmate who died of terminal cancer while awaiting trial, among others.

“There’s been no distinct pattern of deaths,” he said. “I think that’s important.”

Parkinson also said the SLO County Jail wasn’t alone in experiencing an uptick in jail deaths. He pointed to statistics from the Department of Justice that showed an increase in total jail deaths across the state since 2011. That’s the same year that California’s prison realignment initiative was signed into law. Parkinson said realignment changed the jail’s population by placing inmates with longer sentences in county jails instead of state prisons.

Because of realignment, Parkinson said that medical and mental health treatment in the jail has skyrocketed. Holland’s death, in particular, raised concerns about the jail’s ability to handle mentally ill inmates, some of whom are held in the jail due to a lack of space in state and county mental health facilities. Holland, who had been declared mentally incompetent to stand trial four different times, had been waiting for a transfer to the county’s mental health facility at the time of his death.

At the press conference, Parkinson estimated that there were between 16 and 20 inmates in the jail awaiting transfer to a state or county mental health facility, but couldn’t be transferred due to a lack of available space. Parkinson described the jail as a “de facto” mental health unit.

“We have a facility that is not equipped to deal with inmates suffering from a severe illness, both medical and mental health, yet we are forced to do it,” Parkinson said.

When asked if he believed the current medical and mental health staffing at the jail was adequate, Parkinson said he was going to leave that up to the recommendations of the investigations.

Even as investigations begin, some changes have already occurred in the wake of the two most recent deaths. A sheriff’s spokesman confirmed April 17 that Parkinson had suspended any use of the restraint chair until further notice. Parkinson also announced that McLaughlin’s autopsy would be conducted by the Santa Cruz County Sheriff’s Office.

The change comes as the State Medical Board seeks to suspend or revoke the license of Dr. Gary Alan Walter, the county’s contracted medical examiner, in connection with a misdemeanor DUI arrest and conviction last year. Walter, who conducted Holland’s autopsy and ruled the cause of death as natural, received three years of probation after pleading “no contest” to the DUI charge in May 2016, according to court records.

In an email to New Times, McLaughlin’s former attorney, Matthew Guerrero, said he approved of his late client’s autopsy being conducted by an outside agency.

“Given the recent medical board action as well as questions about his prior findings and trial testimony, we support this decision,” Guerrero wrote.

Acknowledging the myriad issues that may have contributed to the deaths in the jail, Parkinson promised during the press conference to address any problems the investigations revealed.

“Our acceptable number of jail deaths is zero,” he said. “That’s what we want.”