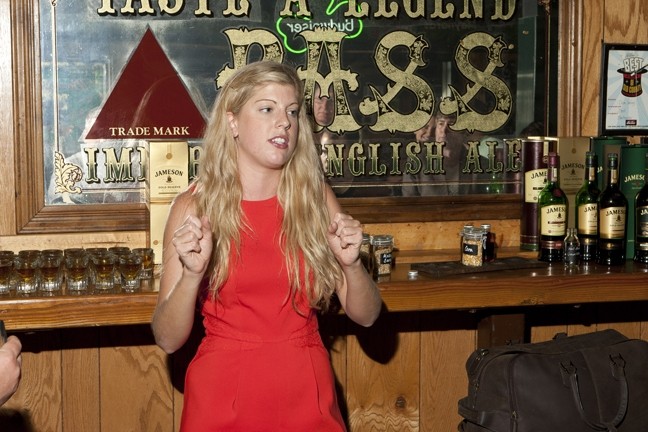 Even after I am shown the sign congratulating McCarthy’s for being the number one Jameson account in the United States, I still find it hard to swallow. And yet, per capita, we swallow more Jameson than anyone else in the country.

Anne Sheeran—the Jameson “ambassador” who has come to McCarthy’s Irish Pub to tell us about the history and production of the Irish whiskey and, of course, pour out samples—corroborates the legendary status that SLO has achieved back at the distillery. McCarthy’s was part of her training. “It’s San Luis Obispo, this tiny town in California,” she says with only a slight francophone inflection on Luis, that pitfall of all non-natives excusable by her very genuine Irish accent. In fact, the small group of aficionados politely arranged around a table at the back of the bar—Jameson sent their diplomatic corps two weeks too early to sign a treaty with the college crowd—is visibly pleased when the first accented word drops from her lips. It would have been such a disappointment if she hadn’t been Irish.

Anne does indeed hail from outside Dublin, where as a teenager she sneaked her father’s Jameson 18 Year Old Limited Reserve. Now she gets special blends with her name on the bottle, as well as the mixed privilege of delivering a lecture over the ambient noise of a busy pub. The audience strains to hear as she begins and, behind the bar, the samples are made ready for the moment their attention wanes.

Anne passes around tiny, Alice-in-Wonderland-like “drink me” bottles filled with alluring but mysterious potions. They turn out to be the raw elements of whiskey production—including 160 proof raw corn whiskey, a clear liquid smelling of car parts or small, purposeful fires. Anne jokingly warns us not to try it, since she’d rather not take anyone to the emergency room.  Noticing the level of the liquid in the bottle she quips, “There’s a swig taken out of it already—don’t know who did that.” We all chuckle. She could be saying just about anything right now. 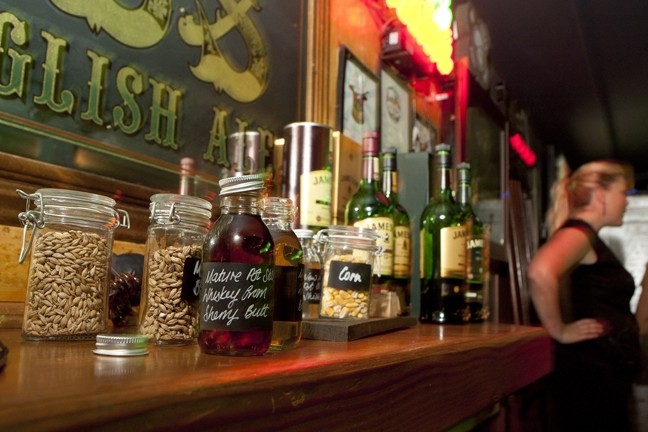 Samples of cask-wood follow: American oak for bourbon, and wood from Spain used to make sherry so unprofitable that the Irish pay the Spanish to produce it for the barrels alone. Anne tells me later that they turn it into vinegar afterward, and I mentally assemble a meal involving a sherry reduction accompanied by Jameson neat. As the whiskey ages in its cask—each bottle must be labeled with its youngest whiskey, though many contain whiskeys old enough to drink, even here in the U.S.—two percent is lost each year through evaporation. The “angels’ share,” Anne tells us.

Finally the samples turn from the educational to the potable—Jameson 12, 18, and Gold, which increase in both delight and price with the ages of the whiskey involved. Gold is a true masterpiece, and occasions the greatest negotiation for additional samples. Anne’s diplomatic vision is generous and nobody leaves thirsty. She takes visible pleasure passing it out. “You could put that on your cornflakes in the morning,” she says, with a smile that might even induce the angels to give up their share.

Polite and only slightly pedantic questions follow, the kind that contain their own answers—of the history of the drink, its popularity in bars where members of the audience have worked or drunk, or both. There is, of course, the requisite question about Bushmills, the whiskey that’ll get you kicked out of a true IRA bar. Anne dismisses it with a laugh—Bushmills was for some time a part of Irish Distillers, who are also responsible for Jameson. She makes Bushmills sound almost like a subsidiary—hardly the case and even less necessary, as the victor in this case is clear. Whether or not Jameson is the true Catholic whiskey, it is by far the more popular. Perhaps McCarthy’s ought to add another sign, behind the bar: NBNA, “No Bushmills Need Apply.”

There is a short talk afterward about bar etiquette, but by that time most of the crowd has dispersed. Let’s face it—those of us who showed up tonight already know how to order a Jameson.

Erin C. Messer is pretty sure drinking with the angels isn’t the same as drinking alone. She can be reached at emesser@newtimesslo.com.