Narihiko “Heeko” Kumagae isn’t shy. He’s been rebuked, yelled at, even kicked—all in the pursuit of his man-on-the-street art. The 26-year-old photographer first traveled from Japan to the U.S. in January of last year, and has since taken solo photo expeditions to New York City and LA, where he currently resides. 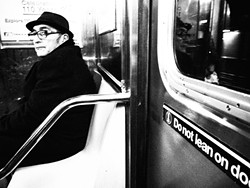 Whether wandering down skid row alleyways, exploring subway cars, or taking in the wide open spaces of Templeton (his favorite Central Coast town), Kumagae is really interested in one thing: people. His photos show humans in all manner of honest expressions: daydreaming, bored, joyous, and—on occasion—super pissed off.

“People have pushed me and sometimes they want to call the police,” Kumagae said with a laugh. The photographer isn’t fazed. Not much can stand between him and is art.

Case in point: When he first came to LA, Kumagae was interested in meeting a handful of underground artists. So he tracked them down one by one and met them. One of those artists just so happened to be old school sign painter David Bond of Lucky B Design in Templeton.

“I visited Templeton last year in summer on the way back to Los Angeles from San Francisco for the first time,” Kumagae said. “I loved the area right away because it’s like a town I imagined America would be and the people are very warm.”

The tight-knit community Kumagae holds so dear will welcome the artist once again during a photography show running through the New Year. An artist’s reception featuring a series of Kumagae’s stark, black-and-white photographs kicks off Oct. 23. It promises to be quite a party (especially if you plan to attend BarrelHouse Brewing Company’s vintage Tinkertin Trailer Prom afterward). Torro Creek Brewing Co. will be on-hand pouring beer and Kumagae to mingle with the crowd. Who knows—if he thinks you’re particularly intriguing, he might even get in your face and snap a photo. Bond calls the artist his “Japanese son,” and Kumagae feels the same way.

“Heeko thrives in an urban environment but loves the rural feel of the Central Coast,” Bond said. “His art is a Japanese national’s view of American street photography and it’s got a really cool perspective. Heeko does it better than a lot of other guys I’ve seen. He’s got the eye, the balls, and the technique to make it all come together.”

Kumagae uses a digital camera as well as a standard compact film camera to create his off-the-cuff images. No fancy equipment required. That would just bog him down—or worse yet—give him away.

“I love compact cameras. It’s good because the subject will have less stress as I photograph them,” Kumagae said. “My style is documentary. I don’t put meaning on photos, and I don’t like to put some fancy titles on photo; just an explanation of who’s in the photo, when, where it was taken.”

A close-up photo taken in NYC of a woman holding an umbrella—or a bunch of street kids sitting on the sidewalk—needs no narration. The art speaks for itself. These are real, everyday lives displayed honestly and without frills.

“I like to visit NYC for street photography; it’s very exciting,” Kumagae said. “I’ve been there two times, last winter and spring and I stayed there two weeks in total.”

The photographer makes these trips alone, but he’s never lonely. Kumagae’s subjects keep him company (even if they don’t know it), and, despite a bit of a language barrier, he has no trouble making fast friends with folks on the street.

“I came here because I grew up with American culture since I was teenager. I just wanted to see what’s going on here directly and be part of it,” Kumagae said. “I like to see old photos because I can see what people are wearing, riding, eating clearly. If my photos become like those photos one day much later in time, that would be awesome to me.”

When I asked Kumagae where he finds the bravery to capture people at their most vulnerable, his answer was surprising. In order to capture that real-life vulnerability in someone else, he must first open himself up to the moment, wherever it may lead.

“I think we need to take half or one step closer to our subjects to get good photos,” Kumagae said. “Distance to subject is very important, so I have to be brave, even though it’s scary.”

Still feeling chicken? Take a page from Heeko, who never shies away from what excites him. To you, he poses this question: “It’s always scary to do something you really want to do, isn’t it?"

Hayley Thomas believes life begins at the end of your comfort zone. Try to scare her at hthomas@newtimesslo.com.