Jarrett Krosoczka, author of Hey, Kiddo, will speak and sign copies of his book at the San Luis Obispo Public Library on April 10 at 6:30 p.m. The SLO Opioid Safety Coalition will also provide resources for programming at the event. Visit slolibrary.org for more information. Hey, Kiddo is available on Amazon for $8.15 in paperback and for $9.99 as the Kindle edition.

He was in preschool when he realized something wasn't quite right. While drawing a picture of his family, now best-selling author Jarrett Krosoczka paused to look around at his classmates' drawings, none of which included grandparents. But Krosoczka's grandparents were his de facto parents because his mom was a heroin addict, in and out of rehab, and his dad was a total mystery.

After writing a plethora of children's and young adult books, including the popular Star Wars: Jedi Academy series, and meeting lots of kids impacted by addiction, Krosoczka knew he had another story left to tell: his own. 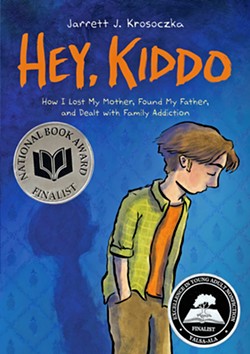 Hey, Kiddo, Krosoczka's young adult graphic novel memoir that came out in October, is a 2019 National Book Award finalist and the 2019 Book to Action selection for the San Luis Obispo Public Libraries. Krosoczka, who will speak and sign copies of his book at the SLO Public Library on April 10, spoke with New Times about writing, family, and addiction.

New Times: Do you remember the first moment that you realized something was different or off about your family?

Jarrett Krosoczka: I remember being in preschool and being asked to draw a portrait of my family. I looked around and it was a lot of mom and dad at home, and I didn't fit that description. I look at that drawing now as an example of I was a kid who had very loving parents; they just weren't my birth parents.

NT: At what point did your father start to factor into your life?

JK: When I was in sixth grade, my grandfather told me my father's first name.

NT: Where was your mom in all this as you were growing up with your grandparents?

JK: She was mostly incarcerated or in halfway homes.

NT: When did you start to have contact with your dad?

JK: He initially reached out to me when I was a teenager, so that was part of the impetus to find him. I sort of dismissed it, but I wanted to find out if I had a brother or sister.

NT: How did your mom's struggle with addiction end?

JK: She came out of using and not using until ultimately she lost that battle a few years ago when I was 39. I was kind of dreading it. I really felt in my gut that would be the way it ended for her.

NT: You were nearly finished with Hey, Kiddo when your mom died. How did that impact your telling of the story or your own processing of her death?

JK: It gave me much more sympathy for her, and I realized that she couldn't help it, up until the very end.

NT: What do you hope that readers take away from Hey, Kiddo?

JK: On the one hand, they'll feel less alone. And for people who don't have this trauma, they'll have more empathy and understanding of what their peers are going through. Δ

Arts Writer Ryah Cooley is the adult child of an addict and writes about the intersection of family and addiction. Share your stories with her at rcooley@newtimesslo.com.