Jay Bird's Chicken owner and chef Jay Bogsinske had two major cooking influences throughout his childhood growing up in Chicago: his mother and grandmother. They taught him all their tips and tricks, like storing leftover bacon fat to cook with throughout the week.

"They would cook everything with that, it was like this incredible seasoning," Bogsinske remembers. "I was probably like 8 or 9 years old before I realized that everyone doesn't cook their eggs with that." A "mutt of the world," as he calls himself, Bogsinske's mix of Dutch, Italian, Irish, and Jordanian heritage gave him an appreciation for food diversity at a young age. He worked his way up in the culinary world, first opening a pizzeria with his uncle when he was still in high school. As he grew into his identity as a chef, Bogsinske dabbled in Italian, Greek, and Arabic food—and pretty much every other cuisine—before spending the bulk of his career in French fine dining restaurants.

But with Jay Bird's, he's taking it way back to the basics that he grew up with. Every item on the menu at Jay Bird's Chicken, which opened in the SLO Public Market earlier this year, revolves around one thing done right: Nashville hot chicken, a way of preparing deep-fried chicken that involves a whole lot of spice.

"With French food, I would have to come to the table and explain to you what you're eating because it was so over-manipulated and so overworked that you wouldn't know what it was," Bogsinske said. "It kind of got to a point where I let go of fine dining food—the over-manipulation, and the ego, and the pretentiousness." 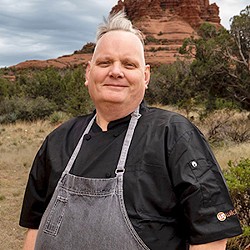 Hot chicken is a local specialty of Nashville, Tennessee, another formative place in Bogsinske's culinary upbringing. The dish originated in Nashville's Black communities, and Prince's Hot Chicken Shack is widely thought to be the first to sell it to the masses. James Thornton Prince opened Prince's in 1945, and Bogsinske calls him "one of the OGs."

"Eating Nashville hot chicken back then meant eating on a picnic table in front of a shack," he said of the dish's origins. "As someone who did fine dining food, it's funny—when you ask chefs what their favorite food is, nine times out of 10 they're going to tell you some hole-in-the-wall. It's comfort foods, it's simple foods that are just done really, really well."

Bogsinske said that's what drew him to Nashville hot chicken: "the honesty of it all."

"The ingredients have to be really good, it has to be handled really well, and your technique has to be perfect," Bogsinske said. "A lot of times, for these Southern and Black-owned businesses, this is generational. The grandmother gave it to the uncle who gave it to the son, and it goes down like that."

"We were watching what was happening with Nashville hot chicken in LA, with the explosion [in popularity] there," he said. "We were also realizing that nine out of 10 people doing it really don't know Nashville hot chicken. They want to cash in on it, but they don't understand all the layers of seasoning, brining, the flouring, the milk dipping, all those things. It's painfully obvious to people who do know what it is that a lot of people don't know what it is."

At Jay Bird's, you can order your hot chicken on a sliding scale of spiciness, from Plain Jay to Fire.

"After you get done frying the chicken, you take it through a second stage where you shake on your spice seasoning of choice," said Branen Fitzgerald, Jay Bird's "creative director/art director/marketing manager," as he described his role. "We offer spices from mild, medium, hot, extra hot, to fire, where fire is literally the hottest chili pepper in the world. We use the Carolina Reaper in that one and in the extra hot we use ghost pepper. For people who are spice chasers, that's something that we love seeing people try." 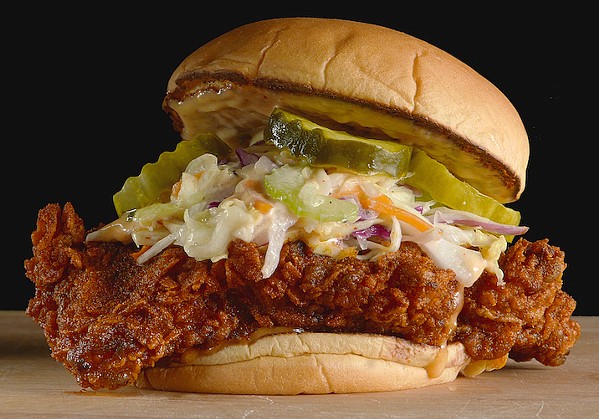 Each item on the menu revolves around the Nashville hot chicken: The chicken sandwich, chicken and waffles, and the Mac Daddy (a chicken sandwich with mac and cheese inside too) are just a few favorites.

Chicken and waffles is one of my favorite comfort foods, so it was an easy choice for me. Not only was the fried chicken some of the best I've ever tried, but so was the crispy, golden waffle underneath it—a testament to Jay Birds' approach of doing a few things really well, rather than a few dozen things just alright.

"When you look at In-N-Out, or you look at [Raising] Cane's, you just see these double lines of people. Their registers never stop," Bogsinske said of his inspiration for keeping his menu simple. "When you do five things perfectly, it's multi-generational. Parents eat it, grandparents eat it, kids eat it, and it's just nonstop. People love chicken." Δ

Contributor Malea Martin will eat chicken and waffles for any meal of the day. Reach her at mmartin@newtimesslo.com.