For a lot of rock music fans, Uncle Tupelo (1987-1994) was their introduction into alt-country. Yes, Jason and the Scorchers had already combined punk and country in the early-’80s and the Long Ryders had helped create the L.A. cowpunk scene in the ’80s too, but Uncle Tupelo’s 1990 album No Depression finally codified the alt-country sound into something tangible and recognizable. The album title became another name for the genre.

Uncle Tupelo had two great songwriters in Jay Farrar and Jeff Tweedy, but rancor between the two led to Farrar leaving the band, whose remaining members led by Tweedy went on to form a “little” act called Wilco. Meanwhile, Farrar formed Son Volt, releasing Trace in 1995. The album only reached No. 166 on the Billboard Top 200 Albums chart, but it made the top 10 of Rolling Stone’s critics’ list and remains a groundbreaking and seminal album in the alt-country genre, which is why Farrar reissued the album last year on its 20th anniversary with eight additional demo tracks and a 1995 live-show recording.

On Friday, June 17, the Jay Farrar Trio will be playing songs from Trace at the Live Oak Music Festival at Camp Live Oak off Highway 154, about 80 minutes south of San Luis Obispo (visit liveoakfest.org for details and tickets).

The lyrics are wonderfully impressionistic, the instrumentation punchy and potent, and Farrar’s forlorn hangdog voice just right. The album’s one radio hit, “Drown,” reached No. 10 on Billboard’s Mainstream Rock Tracks.

“Sky cracks open/ The walls falling through the floor/ Just as well to keep it/ A guessing game in store,” Farrar sings. “You’re with me now, will be again/ Other points in between/ And the cruel, cruel mornings/ Turn to days of swim or sink// If living right is easy, what goes wrong/ You’re causing it to drown/ Didn’t want to turn that way/ You’re causing it to drown.”

The album features one emotional gut-punch after another, with tracks like “Tear Stained Eye” and “Live Free.” I can’t wait to hear these songs live at Live Oak!

New Times spoke to Farrar by phone about the album and his upcoming concert.

New Times: You’re being billed as the Jay Farrar Trio. Why not use the Son Volt name?

Jay Farrar: When we decided to tour in support of the reissue of Trace, I thought it best to present the songs in an elemental way, to boil them down to their essence. A lot of songs are, ah … we’re kind of re-inventing them along the way.

NT: You’re traveling as a trio, but on the Trace sessions you had a full band and a pedal steel and a fiddle. Now that you’re playing the songs again, have you had to modify them to adapt to the more spartan instrumentation?

JF: Eric Harwood plays pedal steel and Gary Hunt is on fiddle, mandolin, and electric guitar, oh, and steel guitar on a couple songs where we do a dueling steel guitar thing that never happened on the studio version. It’s a pretty expansive sound, and live it feels sort of like a Wild West shootout of steel guitars.

NT: When you decided to revisit Trace after 20 years, what surprised you most about the music? What kind of memories did it bring up?

JF: Listening back, I felt the band sounded really good, sort of visceral and not overly polished, which is the way a rock band should sound. I also remembered being ecstatic to be writing songs and getting to record with that kind of instrumentation—pedal steel and violin—which is the bedrock of so much of the music I had been listening to at the time.

NT: What did the song lyrics tell you about where you were at the time? Do you feel your sensibilities have changed over the years?

JF: Ideally everyone changes for the better, but I sort of hear the situation I was in at the time. I was in living in New Orleans and I see references to the all night radio station I would listen to, spending a lot of hours driving and thinking about music. Looking back, it was a good formative experience.

NT: After your work with Uncle Tupelo, Trace felt like a decided turn into somewhat more traditional country. Was that conscious?

JF: It was conscious in that I wanted to experiment with traditional instrumentation often found in country music, but I wasn’t completely letting go of the background I’d come from—garage rock and lots of electric guitars.

NT: When you were recording Trace, did you expect “Drown” to be the hit single? 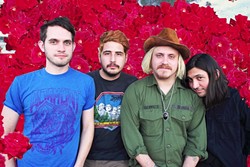 JF: No, I never expected “Drown” to do well on radio. I thought maybe “Windfall” could be something, but ironically I think the instrumentation probably worked against it.

NT: You were born in Illinois where Uncle Tupelo formed. You still live in St. Louis. Do you think your Midwestern setting has influenced your sound?

JF: It does, particularly being located in St. Louis and doing a lot of touring. It’s a good central location and the music of the region is omnipresent, so I suppose growing up here has an influence. I’m definitely happy living here from a logistical standpoint.

NT: One last question: Are you enjoying playing these songs you wrote 20 years ago?

JF: Absolutely, I’m enjoying it, but I think it goes back to the way they’re being presented, which keeps them fresh for me.

Come down for the day or camp for the whole June 17 through 19 Father’s Day weekend, but don’t miss Jay Farrar at the Live Oak Music Festival!

Numbskull, Good Medicine Presents, or a combination of the two have once again teed up a huge slate of live music this week, the biggest show probably being The Brothers Comatose on Friday, June 10, at Tap It Brewing Co. (7 p.m.; 21-and-older; $16 presale at ticketfly.com or $20 at the door), with Moonshiner Collective opening.

“It all sort of started before we ever picked up instruments,” Ben explained. “Our mom was in a folk quartet that sang beautiful songs in harmony. Alex and I would watch them rehearse for hours when we were kids.”

Good Medicine Presents and Tap It Brewing Co. also team up the day before when The Ragged Jubilee, the Shawn Clark Family Band, Happiness, and special guests play Thursday, June 9 (7 p.m.; all ages; $10). That’s a whole lot of rockin’ blues and country.

On Sunday, June 12, Numbskull and Good Medicine Presents bring together PANGEA—a band that describes its music as “poppy, snotty, shitty, fitty, punky, stunky garage-pop and roll”—with opening acts Meat Market and Royal Suns to the Fremont Theater (7 p.m.; all ages; $10 presale at ticketfly.com or $12 at the door).

And also on Sunday, June 12, Good Medicine Presents at Opolo Vineyards The Tipsy Gypsies (5 p.m.; free), an amazing blues, jazz, and pop act that can sounds like a combination of Django Reinhardt and Billie Holiday. 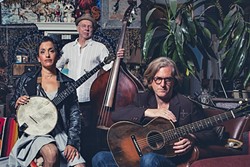 Songwriters at Play hosts LA-based quintet Mick Rhodes and the Hard Eight on Thursday, June 9, (6:30 p.m.; all ages; free), at the Shell Café. They’ve been described “as AC/DC meets Lucinda Williams, then goes out on a bender with Paul Westerberg, only to find itself at a late night diner with Tom Petty, when out of the blue Ron Sexsmith sits down for pie, and they all somehow end up at Little Richard’s hotel room listening to the Faces, watching the sun come up.” Special guests include San Francisco’s Hart Bothwell.

Newly revamped and sounding better than ever, The Monroe—a great pop, soul, rock, and beyond band—will play two shows at Atascadero’s Hush-Harbor on Saturday, June 11 (seating at 6:30 and 8:15 p.m.; all ages; $20; call 540-0541 for required reservations). Fronted by Morgan Monroe and her stunning voice, the act also features the unusual musical genius of Dr. Isapony.

Get your punk rock on this Saturday, June 11, when Sleeping Tiger Fitness hosts Sex Stains (former members of Bratmobile), Bearcats, Hot Tina, and Off Center and the Holes play for your moshing or listening pleasure (7p.m.; all ages; $6).

The Central City Swing Band performs their annual Spring Concert in Orcutt’s Unity Chapel of Light Church on Tuesday, June 14 (7:30 p.m.; all ages; donations accepted). Expect a program of swing and modern jazz performed by a 17-piece band with a vocalist.