Jazz echoes through the Cambria pines

The tiny 'jazz colony' has more Grammys than gas stations

The jazz scene has certainly gotten classier with age. In the 1930s it was something a bit more scandalous, its artists synonymous with alcoholics, reefer addicts, and criminals. “Their satanic music, jazz, and swing, results from marijuana use,” former Federal Bureau of Narcotics Director Harry J. Anslinger famously accused.

Decades later, in the hit musical Chicago, the hysteria Anslinger spawned would issue from the thin lips of the conniving Billy Flynn—a lawyer whose verbal showmanship in the courts often requires a jazz-like improvisation—as Flynn attested that, indeed, ladies and gentlemen, “It was the tragic combination of liquor and jazz,” that drove sweet Roxie Hart to murder her lover.

The last place you’d expect to find this tragic combination is in our own backyard: in charming, coastal, overcast Cambria. But Cambria’s Hamlet Restaurant, in addition to boasting a spectacular view and satisfying lunch and dinner menu, has also served as Cambria’s jazz hub since 1990. There, the nearly weekly “Famous Jazz Artists” Sunday concert series, the brainchild of jazz veterans Charlie and Sandi Shoemake, lives up to its name.

Francesca Nemko, a jazz-loving journalist and poet who was a Cambria local for many years, calls the Hamlet, “the hub that started it all.” In the ’90s, Nemko penned several pieces on the Shoemakes and their concert series. In her writings on jazz, she draws on her experience working in London jazz clubs, and later as an assistant to chief Los Angeles Times jazz critic—and fellow British expatriate—Leonard Feather. It was Nemko who coined the term ‘jazz colony’ to describe the collection of world-class jazz musicians in Cambria.

At one time, the Shoemakes were part of a hip Los Angeles jazz scene. Sandi sang with bandleader Si Zentner; Charlie once toured with George Shearing and worked with many popular artists, Frank Sinatra included. Now the couple rarely travels. Through their regular concert series, the Shoemakes have opted instead to serve as gatekeepers to the burgeoning local jazz colony. Why Cambria, you might ask? Though the fresh air and ocean view likely played a part, the Shoemakes’ decision was also inspired by fellow jazz musician James “Red” Holloway’s move to the seaside town several years earlier.

Red Holloway’s presence in Cambria brings to the town a contact high of glamour, of jazz royalty. A well-known blues and jazz saxophone player, Holloway had previously lived and worked in Chicago, New York, and Los Angeles. From the late 1940s on through the 1950s, Holloway was performing with the likes of Billie Holiday, Aretha Franklin, Muddy Waters, and Chuck Berry, as well as bluesmen Roosevelt Sykes and B.B. King. Holloway was already an accomplished musician in the late ’60s, thanks in part to a three-year stint in a band with guitarist George Benson and organist “Brother” Jack McDuff. Holloway moved to California in 1967, where he became the talent coordinator of Los Angeles’ famed Parisian Room. For the next 15 years, his Web site boasts, Holloway hired “everyone who was anyone in the world of jazz and blues” to play at the club, where he was also a member of the house band. However, in 1983, Holloway’s request for a cost-of-living raise was turned down. He quit as a result, and the club closed eight months later.

But Holloway’s tenure at the Parisian Room had undoubtedly left a mark on Los Angeles’ jazz culture. In The Encyclopedia of Jazz in the Seventies, critic Leonard Feather wrote, “Holloway is capable of generating great excitement with his big sound and hard-driving, mainstream-modern style.” 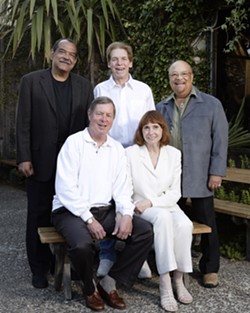 Despite his illustrious career to date, Holloway remains extremely easygoing, fun, and down-to-earth. Getting a phone call from him was akin to receiving a much-anticipated parcel in the mail.

“Hello, Mr. Holloway!” this reporter practically shouted. “What are you doing right now!?”

Holloway, who calls Cambria, “an oasis in the desert,” says he chose the small community for its peaceful, quiet environment and ocean view. Holloway discovered Cambria on the way down the coast after performing at the Monterey Jazz Festival. He decided to stay for a few days, loved the town, and bought a house there in 1985, making him the first big jazz name to do so. Today, he makes Cambria his home base, the place where he rests when he’s not traveling the globe with his band.

When asked if he is often recognized in Cambria, Holloway bursts out laughing. Recognized?

“Everyone in this town knows me!” he says, adding that he often crosses paths with other musicians on the beach. They include Kevin Eubanks of the Tonight Show Band, whom Holloway said is building a house there. (Calls to Eubanks’ publicist were not returned and an e-mail to his Web site did not receive a reply.)

When not traveling, Holloway has been known to play at Cuesta College, Cal Poly, The Inn at Morro Bay, and the hub that started it all, The Hamlet. When asked if he had a favorite local musician, Charlie Shoemake said that, while all of his experiences at The Hamlet have been positive, “It’s always special when Red plays.”

When Holloway mentioned having played at Paso Robles’ Level 4, this writer unfortunately blurted, “Isn’t that, like, a speakeasy place?” and was met with gales of hearty laughter from the other end of the line. Holloway, a child of the ’20s, probably was shaking his head. Regaining his composure, he came back to the phone, sighing, “Oh child, what are you talking about?”

Despite their great talent and success the jazz musicians of Cambria, population 6,232, seem a most unpretentious, outgoing bunch, although the publicists of some can bristle when reporters innocently call their clients’ homes directly for an interview. Such was the case with two-time Grammy-award-winning saxophonist Ernie Watts.

Watts and his wife Patricia first came across Cambria on a trip down the California coast. Like fellow jazz great Holloway, the couple had been making their way down from the Monterey Jazz Festival. After spending a few days in Cambria, they, too, decided to purchase a home there. “I thought, ‘We’re not getting any younger, and it’s not getting any cheaper,’” Watts said. He has no plans to move anywhere else, he said, adding that he loves the small town and intends to spend the rest of his life there.

Like his jazz-musician neighbors, Watts has had a brilliant career in music. He started playing the saxophone at age 13, later attending Boston’s Berklee College of Music on scholarship. In the ’60s, Watts toured with Buddy Rich, playing tenor sax. One of his earliest works in film was playing saxophone on the soundtrack of Grease, though he also played clarinet on the musical score of The Color Purple and sax on the soundtrack of Midnight in the Garden of Good and Evil. That exquisite saxophone solo on Frank Zappa’s 1972 album The Grand Wazoo? That was Watts. In the early ’80s, Watts toured with the Rolling Stones, but he is best known for playing with Charlie Haden’s Quartet West and for his two Grammy awards as a musician. More recently, Watts also took home the 2007 Independent Music Award for his jazz album Analog Man.

Though frequently traveling, Ernie Watts has also taken the stage at The Hamlet, accompanied by Charlie Shoemake. He has recorded music with Red Holloway, though the two have yet to perform together locally. Watts has also taught classes to aspiring

musicians at Cal Poly and Cuesta College, encouraging them, above all, to love what they do.

In conversations with jazz types on the Central Coast, the name of yet another Grammy award-winning Cambria local kept coming up: Jay Graydon. Having lived on the Central Coast since 1978, guitarist-songwriter-producer Graydon is well acquainted with the rest of the Cambria jazz colony. He likens Cambria’s environment—with its fresh air and small-town vibe—to “a washing machine for the brain, leading to fresh musical composition.” In an e-mail interview, he announced that even as he typed, “a gentle ocean air breeze entered through a window,” inspiring the beginnings of a song (he said his composition, the piano part of which he says he’s already recorded, is titled, “The New Times Breeze”).

Graydon worked in Los Angeles as a session musician from the late ’60s until the late ’70s. There, he worked with Diana Ross, Ray Charles, Cher, Marvin Gaye, The Jackson Five, and many others. Both of his Grammys were awarded in the ’80s for his R&B compositions. But Graydon is no stranger to jazz; his 12 Grammy nominations included one in 1980 for Best Jazz Fusion Performance. He and Watts have played together on records and TV shows throughout the years, including a remake of the Steely Dan song, “Home At Last” on an instrumental album entitled The Royal Dan.

Although, according to Charlie Shoemake, the venue sees its fair share of young music enthusiasts during the school year, the scene at The Hamlet was definitely on the mature side during one recent visit. No one else in the building had to be carded, for starters. But dull it was not.

The couple seated nearby—she an artist, he a self-described crooner—could be seen sneakily writing notes to one another on the menu with a marker throughout the performance, giggling and passing the thing back and forth. But on the whole, the elegantly dressed audience was thrilled by the music, careful not to miss a note. Some of these people never miss a show, Charlie says.

Besides the Shoemakes, who rarely perform on the road now that their jazz series has taken off, the other musicians who play at The Hamlet come and go. Many are L.A.-based but make a point of stopping in Cambria to play. Musicians traveling to San Francisco or Sacramento, Holloway said, will often play at The Hamlet as well. Cambria, situated on Highway 1, is directly between San Francisco and Los Angeles. It’s right on the way, yet isolated.

Asked if he had any advice for young aspiring musicians, Charlie said, “Yes I do, but unfortunately it means they’re going to have to get out of here!” There’s no music industry here on the Central Coast, he points out. No major recording companies. The only way to become known is to go to New York or Los Angeles. Young musicians come to the Central Coast to attend college before seeking their fortunes elsewhere, while the top names settle down here to rest and enjoy the view after a successful career in the big cities.

While the jazz legends of this slowly growing colony surely know how to have a rollicking good time, this ain’t no playhouse for the children—no sir! Indeed, ladies and gentlemen, it can take a lifetime to earn a spot in Cambria’s star-studded jazz scene.

The Hamlet Restaurant, located in Cambria on Exotic Gardens Road, Route. 1 at Moonstone Beach Drive, is the home of the almost-weekly “Famous Jazz Artists” concert series, held most Saturdays at 4 p.m. Call The Hamlet at 805-927-3535 for upcoming show times.

Intern Anna Weltner can be reached via Arts Editor Ashley Schwellenbach at aschwellenbach@newtimesslo.com.