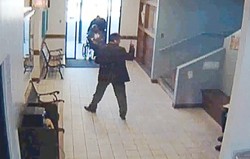 Jeff Lind, 55, of Orcutt, the general manager of a San Luis Obispo-based advertising agency, filed the claim—the initial step in a full-fledged lawsuit—alleging that Santa Barbara County has no jurisdiction over him.

He previously told New Times that he committed no crime, so there’s no probable cause, so there’s no jurisdiction. His counterclaim, alleging trespass, cites various laws, amendments, and procedures from throughout history to make a case that the court is technically a foreign state that must disclose its true jurisdiction. The claim notes that Lind holds the right to invoke the 11th Amendment: “The judicial power shall not be construed to extend to any suit in law or equity, commenced or prosecuted by a Foreign State.”

The whole messy legal situation began in December 2010, when Lind was awaiting a hearing for a family member at the Santa Maria courthouse. While waiting, Lind struck up a conversation with his relative’s arresting officer, Guadalupe officer Ortega, who sat nearby.

What happened next is in dispute, but Ortega alleges Lind became verbally threatening, allegedly getting in Ortega’s face and saying, “… you got something coming to you, too, pal!”

Lind was taken into custody shortly after the incident. Ortega later stated in a crime report that he became fearful for his life due to Lind’s actions. Lind now faces charges of threatening a witness.

Lind denies making any threat, however, and points to surveillance video footage of the incident in the court waiting room as evidence that he never became menacing toward the officer. Throughout his early legal proceedings—none of which have yet been a trial—Lind has attempted to use the video to prove his innocence.

He later sent Kuns and other officials a “National Standards Damage Claim Packet” alleging more than $77 million in damages.

“I am not the plaintiff and they are the defendants,” Lind wrote in an Aug. 3 e-mail to New Times. “My case hinges on jurisdiction, did they have the jurisdiction to do what they did to me without any evidence whatsoever and have in their possession video proof of my [innocence].”

The Office of Santa Barbara County Counsel declined to comment on the claim, citing the pending nature of the case. Deputy District Attorney Lelujian, who was named specifically in the suit, also refused comment.

According to Lind, he’s scheduled to appear in Santa Barbara Superior Court on Aug. 4, where he said he’ll request a continuance until the court proves it has jurisdiction over the case.