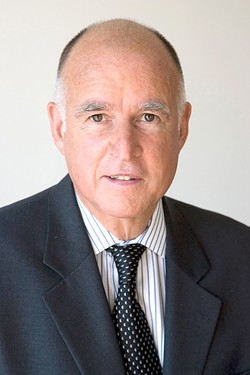 On Feb. 4, a letter from the Office of the Attorney General landed in the hands of SLO County planners. The issue it references was about as local and niche as they come: the Conservation and Open Space Element (COSE). Now a three-year endeavor, the COSE is an update and consolidation of several pieces of the county’s General Plan. But some key language over how the county will handle renewable energy projects—specifically the massive solar projects proposed for the Carrizo Plains—obviously sparked Brown’s interest.

“There are people saying, ‘Wow this is unusual because the attorney general is sort of sticking his fingers into a strictly local issue,’” Senior Planner James Caruso told New Times.

The energy portion of the COSE has become the most hotly debated portion of the element. Some seized the portion as an opportunity to minimize if not outright eliminate environmental impacts from large-scale solar projects (Carrizo projects have been criticized for potentially tromping on animal habitat) by tightening existing environmental legal jargon. Others have warned the proposed language is too restrictive and instead of ensuring that county will end up with better project applications, the new rules will simply deter companies from establishing renewable energy in the county.

Brown falls in the latter camp.

“I have reviewed aspects of your proposed General Plan and am concerned that it erects unjustified and burdensome barriers to solar and renewable commercial projects proposed for the county,” the first line of his letter states.

SLO County supervisors are currently reviewing the COSE and are scheduled to address the energy chapter on March 23.

County Counsel Warren Jensen said he was aware of the letter but hadn’t yet reviewed it. Still, he added, “We’ll certainly be looking at it.”

One local official commented that Brown’s language was surprisingly similar to letters from solar companies seeking to build in the county.

A July 2009 letter from First Solar stated: “… we are concerned that the insertion of limiting language into the draft COSE may still in fact tie the county’s hands under [the California Environmental Quality Act] with respect to renewable energy projects.”

Brown’s letter reads: “Unfortunately, certain proposed amendments to the General Plan are likely to deter such development and tie the county’s hands in approving valuable projects in the future.”