Jerry's kids send him back to high school

It may take a village to raise a child, but it only takes a few dozen bar patrons to send their favorite bartender to his 50th high school reunion. 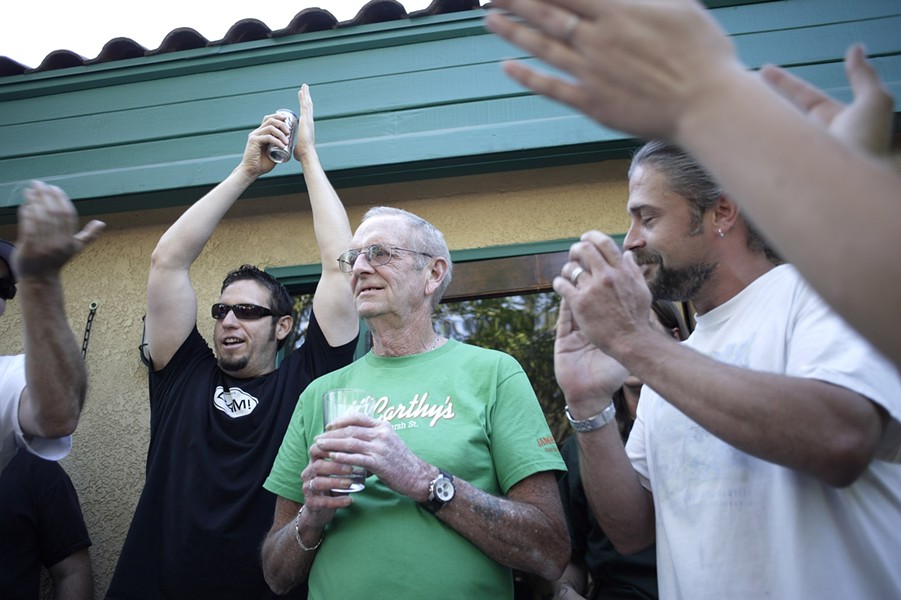 Last week McCarthy’s Irish Pub patrons presented bartender Jerry Bender with $1,500 towards the approximately $2,000 needed for the trip back to Ohio, where Bender graduated from McKinley High School in 1958. The 68-year-old part-time bartender only works three dayshifts a week, and he simply didn’t have the money saved up.

“A few months ago, he’d been talking about it a lot, about how excited he was,” explained bar patron Suzanne Ren»e, “but then he suddenly stopped talking. When I asked him why, he said he couldn’t afford to go. Well, Victoria and I got to scheming.”

Victoria Buser, Ren»e’s partner in the effort, started collecting money on the down low, sidling up to patrons who knew Bender and clandestinely relating his tale of woe. A worn manila envelope became the de facto donations depository, on which Bender’s fans wrote their name, amount donated, and occasionally an obscene little note.

Bender started as a doorman at McCarthy’s 22 years ago, and over those years he’s gained a reputation for his acerbic and frequently insulting wit.

“You love to hate him, and you hate to love him,” laughed Ren»e.

Several patrons joked that sending him back to Ohio would give them all a break from his insults, and a few others said they’d donate … as long as it was a one-way ticket. It’s all part of the give-and-take Bender has developed with patrons.

When it came time for the presentation, Peter “Bazil” Clark called the gathering to order: “I think everyone knows why we’re here.”

Teetotaler Bender, wearing a green McCarthy’s T-shirt, clutched a glass of water and appeared to get a wee tear in his eye. Interestingly, during the presentation of the money, the clearly moved Bender was finally at a loss for words: “This is really … neat!”

“Neat?” someone yelled incredulously from the crowd. “Is that all you’ve got, Bender?”

“Seriously, I appreciate this,” added Bender, who admitted later that most of his high school chums he’d really like to see were dead. “A lot of them enlisted right out of high school and ended up in Vietnam.”

Perhaps McCarthy’s patron Scott Cusick summed it up best: “For all the times he took care of us, we’re taking care of him.”