After facing intense scrutiny over several controversial Facebook posts comparing Democrats to Nazis and calling for Islam to be banned, Nipomo resident Jim Harrison resigned from his post as a SLO County Planning Commissioner and declined a "citizen of the year" award. 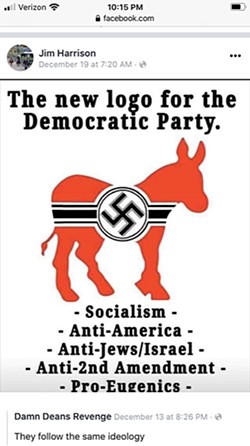 In a Jan. 2 press release, the South County Chambers of Commerce announced that Harrison had refused to accept his recently bestowed Nipomo Citizen of the Year award, and the following day, 4th District Supervisor Lynn Compton announced in a statement that Harrison had stepped down from his position with the county.

"County District 4 Supervisor Lynn Compton accepted Jim Harrison's resignation as Planning Commissioner today," Caleb Mott, Compton's legislative assistant, wrote in a statement released on Jan. 3. "Supervisor Compton will begin the process of selecting a new Planning Commissioner, and more information will be provided when the selection is made."

"That was the outcome we had hoped for," said Kathy Minck, who serves on the Diversity Coalition's board of directors.

Minck said that if Harrison's beliefs truly align with his Facebook posts, which the Diversity Coalition called "racist, anti-Semitic, Islamaphobic, and white nationalist" in a December 2019 letter to public officials, he doesn't meet the criteria necessary to be honored by or hold a job with the county.

"He shouldn't be working in a public role for the voters of the county if he diminishes any segment of our population," Minck told New Times.

Still, Minck said only the bare minimum was done to mitigate this issue, and she and other SLO County residents had hoped Harrison or Compton would directly address the situation in some way.

Compton's office told New Times she wouldn't comment further on the matter. And Harrison's only statement—a brief post on Facebook—is considered a "non-apology" to many, Minck said.

"There was a post on my Facebook that offended some people," Harrison wrote in a post on Dec. 30, 2019. "I apologize if it was offensive to you. The post was deleted when this came to my attention."

In an effort to consider the issue more deeply, Minck said the Diversity Coaltion invited Harrison to its Jan. 29 community outreach meeting, where a guest speaker will share her experience surviving the Holocaust, starting at 6 p.m.

"We're not naive enough to think that one such meeting would change any hearts and minds," Minck said, "but even if it resulted in an 'aha' moment that would soften his heart and mind ... ."

That would be worth it, she said.

Harrison, who Compton appointed to the Planning Commission in 2015, came under fire for his controversial social media presence at the tail end of 2019 when he was named Nipomo Citizen of the Year by the South County Chambers of Commerce.

"America needs to shut down all Mosques and ban Islam," read a post Harrison shared on Nov. 21, 2019, which has since been deleted.

In response to one commenter's mention of the U.S. right to religious freedom, Harrison wrote that while he would normally agree, Islam is "a terrorist group that band and hide under the guise of being a religion."

In another post Harrison shared on Dec. 11, 2019, House Speaker Nancy Pelosi is Photoshopped into a Nazi uniform in a framed photo titled "Minister of Propaganda." Δ