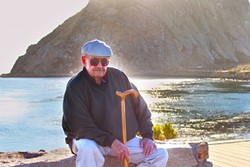 Jim Hayes, retired Cal Poly journalism teacher and writing coach for news organizations including the L.A. Times and Associated Press, passed away in his Los Osos home Tuesday, June 10. He was 88.

Mentor of many and friend to even more, Hayes is survived by his wife, Ellen; five children; and five grandchildren. A Navy veteran, avid golfer, and lover of all things Irish, Hayes is revered by the hundreds of students—many now working journalists—on whom he made an impression while teaching at Cal Poly from 1969 until he retired in 1992. During that time, the then-titled Mustang Daily became an award-winning newspaper. Hayes also founded the Brock Center for Agricultural Journalism at Cal Poly, wrote and edited for several other papers, and taught at other universities across the country. While continuing to coach writers, Hayes took former students under his wing and became their friend and mentor.

Hayes went into Hospice care in early January after a tumor was discovered on his brain. The news sparked an outpouring of admiration and stories from his former students, many of which were posted on the already-existing Facebook group “We Love Jim Hayes.” Former students ran tributes in the L.A. Times, The Tribune, KSBY, and elsewhere.

“There isn’t a newsroom from Redding to San Diego and dozens of points in between that doesn’t have a Jim Hayes disciple knee deep in the craft of reporting, writing, and editing,” Steve Churm, an Orange County Register VP, wrote on Facebook. “I’d wager an Irish whiskey that few individuals, if anyone, has had the impact on so many California journalists as Jim. The breadth and depth of his influence is profound and, perhaps, unprecedented. The Hayes family tree of journalists, photographers, communicators, and educators towers over our industry like no other. Even now, his greatest gift, connecting his followers through a shared passion for prose, is at work as many of us seek comfort communicating with each other about a man whose life has been a compass for us all. He taught me to tee the ball high, take a big swing, and don’t look back. I’m grateful for his wisdom and his friendship. I will always cherish the red ink and the words on my copy, ‘see me.’ Thank you, Jim.”

Hayes was notorious for giving students an F if they spelled a word or a name incorrectly—in the days before computer spell check. That thoroughness was part of the ethic of high standards former students say instilled a certain degree of professionalism.

During a visit to his Los Osos home in January, this reporter had the opportunity to thank Hayes for the memorable conversations over occasional lunches in recent years; even in old age, Hayes showed an admirable capacity to look at complex matters with fresh eyes and a healthy dose of curiosity.

“That’s all I have left, is my curiosity,” he said in a soft voice.

In lieu of flowers, the Hayes family asks that donations be made to the Jim Hayes Scholarship Fund at Cal Poly. Funeral arrangements are pending.