After the findings of an independent misconduct investigation were made public, it's clear that many of Arroyo Grande Mayor Jim Hill's elected peers want him off the South SLO County Sanitation District's board of directors.

The problem is that none of them seem to be sure just how to boot Hill from the three-member board. 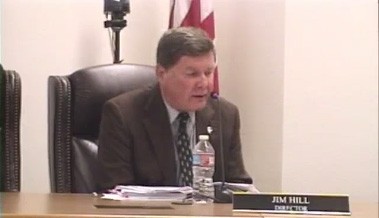 Hill was the lone vote against the measures, while the two other members, Grover Beach Mayor John Shoals and Oceano CSD member Linda Austin, voted in favor of them.

The investigation looked into Hill's actions both in his role on the sanitation district's board and as Arroyo Grande's mayor. The investigation concluded that Hill overstepped his bounds as a sanitation district board member by inserting himself into confidential personnel matters, and that he shared privileged attorney-client information and documents to unauthorized third parties.

Shelline Bennett, a lawyer for Liebert Cassidy Whitmore (LCW), the law firm that headed up the investigation, indicated that the board should distance itself from Hill's actions, or risk facing potential lawsuits.

"If you do not, you potentially create legal liability for yourselves and the district by not taking action," Bennett said.

Both Hill and his attorney, Stewart Jenkins, pushed back on the investigation's findings at the meeting. Hill, who has long asserted that the investigation was politically motivated, defended his actions both as Arroyo Grande's mayor and as a sanitation district board member.

"I have not done the misdeeds as are characterized here," Hill said at the meeting.

In a short presentation in defense of his client, Jenkins also disputed the investigation's findings, and questioned the quality and impartiality of LCW and its investigator.

"You were fooled into this investigation," Jenkins said.

Austin indicated that Hill's refusal to apologize concerned her and was in part an impetus to call for his censure and removal from the board.

"We've spent tens of thousands of dollars of ratepayer money to uncover the truth, and what I see here is still a refusal to accept responsibility," she said. "No remorse. No admission of wrongdoing on things that were proven by the independent outside investigator."

The district decision comes on the heels of a 3-2 vote Sept. 12 by the Arroyo Grande City Council to ask Hill to voluntarily step down from his seat on the sanitation district. At that meeting, the city's legal counsel noted that it would be difficult for the council to remove him from the board, saying that it did not have the authority to select a different representative.

According to state law, the "presiding officer," usually a mayor, of a municipality is designated as a member of a sanitation district, and is allowed to select an alternate who can serve in their place during their absence or due to an "inability or refusal" to serve.

As of Sept. 26, Arroyo Grande had not received any letter from the sanitation district related to removing Hill from that board.

A resolution to publicly censure Hill is expected to come to the board for a vote at a future sanitation district meeting.