Jody Mulgrew brings new songs from the road to the Wise Owl on Nov. 1 and Steynberg Galley on Nov. 2

As a guy who knows something about undependable cars, I can’t help but appreciate the collaboration between Jody Mulgrew and Bob Rea, who wrote some great songs together. If it weren’t for bad cars, well … read on.

Mulgrew and Rea (pronounced “ray”) have been co-writing together for years “in hotel rooms in Buellton, log cabins in Durango, and on back porches in Nashville.” 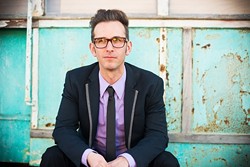 Mulgrew, of course, is well known locally as the frontman for the now-defunct Johnny Starlings as well as Jody Mulgrew and the Skeleton Crew. Jody’s also won Album of the Year at the New Times Music Awards twice now.

Rea’s albums have made it onto the Americana Charts in the United States and the UK, and European radio personality Lord Litter called Rea’s Black Highway “the coolest outlaw-ish, Southern-rock-spiced release in ages.”

The two began their collaboration back in 2010, resulting in a catalog of songs including cuts on each of Mulgrew’s last two albums.

“We were always looking for a chunk of time to finish ‘Love My Little Baby,’” Mulgrew said of the pair’s first co-written song. “Bob was out from Colorado on tour one spring, and I was passing through the town where he was lodging. Just inside the city limits, at 5 o’clock in the evening, my van broke down. I wasn’t going anywhere, so we took advantage of the opportunity and did some writing. It took my being stranded and some costly auto repairs, but we finally got that song done, and a couple others to boot.”

More work was completed later—thanks, once again, to the quality of the musicians’ automobiles when Jody and a friend were traveling by car to Tennessee (Jody’s new hometown) and decided to swing by Durango, Colo., to visit Rea.

“I had planned to stay in Durango one night, do an early morning writing session with Bob, say our goodbyes, and be on our way,” Mulgrew said. “When we departed Durango, we made it 2 miles out of town before the clutch in my friend’s car went out. We ended up spending a week Durango waiting on repairs. I guess we know now what it takes to get our best work done.”

You know, come to think of it, we were promised jetpacks, monorails, flying cars, robot kitchens, and more. Where is that stuff? And weren’t we going to become so productive that we’d be paid not to work? I still want that gig.

From what I can tell from the few videos I watched online, the Scottish band We Were Promised Jetpacks does not spend its time lamenting the lack of The Jetsons future we were promised and instead spends its time delivering a certain brand of earnest guitar rock in the vein of Smoking Pops or Trashcan Sinatras, but with the charming accent of The Proclaimers.

Their tight, four-minute tracks could be described as indie rock or post punk, and their newest album, Unravelling, which was released this month, seems to have more of a swirling and swelling wall-of-sound feel from their first two studio albums (2009’s These Four Walls and 2011’s In the Pit of the Stomach).

They formed in 2003 in Edinburgh, and their first gig was a battle of the bands at their school, which they won. Over their career, their songs have found there way into TV shows like Sons of Anarchy and films like last year’s sleeper coming-of-age dramedy The Kings of Summer.

Thompson explained in press materials, “Stuart is an accomplished keys, piano, and guitar player as well as having a lovely little singing voice, and with him we have tried to do something a little different with this selection of songs. We’ve known him for ages and played music with him before so we were pretty sure it would work out. It has just been the four of us since about April 2004, so having someone new with us has been an enjoyable part of the process.”

The Tony Award-winning musical Chicago returns to SLO’s PAC on Tuesday and Wednesday, Nov. 4 and 5, at 7:30 p.m. to deliver the story of murderous molls, sensationalism crimes, and electrifying song and dance numbers.

It’s 1920s Chicago, and Roxie Hart—a housewife and nightclub dancer—murders her lover after he threatens to leave her. The story chronicles how she dupes everyone, including her cellmate Velma Kelly, by hiring a slick lawyer. It’s wicked fun, and the songs are so great they bear repeated listening. Add in the terrific choreography, and it’s easy to see why Chicago has been America’s longest-running musical. And Bob Fosse! What more do you need?

There’s a free pre-show lecture led by Cal Poly Music Deptartment’s Alyson McLamore at 6:30 p.m. in the Pavilion before the Tuesday show. Tickets range from $60 to $90 (call 756-4849 or order online at calpolyarts.org).

Appalachian Songwriters Jeni & Billy perform at the Red Barn Community Music Series on Saturday, Nov. 1 (5 p.m. potluck, 6 p.m. show; $15 at the door). They’ll be joined by multi-instrumentalist Craig Eastman for the show to deliver music that’s been described as “a deceptively simple style that will catch you completely by surprise—some of the best Southern music I have heard in a very long time,” by Tom Druckenmiller of Sing Out Magazine.

On Saturday, Nov. 1, at 7 p.m. in the Steynberg Gallery, prepare yourselves for the Brazilian stylings of Choro de Ouro and Brasiliense. The aptly monikered Choro de Ouro plays Choro music, popular in the later part of the 19th century in Rio de Janeiro. Brasiliense is Bay Area-based composer, guitarist, and vocalist Ian Faquini and flutist Rebecca Kleinmann, who are releasing their first album together. Its Brazilian rhythms have strong melodic and harmonic influences from such composers as Bach, Ravel, Gershwin, Duke Ellington, Tom Jobim, and Guinga.

On Saturday, Nov. 1, the SLO Blues Society’s going to bring the blues heat when they present Nick Moss and his Band at 8 p.m. at the SLO Vets Hall. Moss & Co. call Chicago home, but have played blues festivals around the world. They frequently play Buddy Guy’s Legends club in the windy city, blending traditional blues and progressive, jam-oriented blues-rock. The Dave Miller Band will open the show. SLO Dance offers free dance lessons at 7:30 p.m. Sorry, kids. You must be 21 or older to attend. Halloween costumes are encouraged; prizes will be awarded!

On Sunday, Nov. 2, the PAC will be alive with the sound of music, and you should add your voice to it. Yeah, I’m talking about the Sing-a-Long-a Sound of Music show at 3 p.m. A screening of the classic Julie Andrews film musical plays complete with subtitles so that the whole audience can sing along. Local theater personality and all-around good guy Chad Stevens will lead the event, which includes a costume competition (break out those nun habits, girls in white dresses with blue satin sashes, and lederhosen). Student and adult tickets for the performance are $12 and $24 (756-4849 or order online at calpolyarts.org).

You don’t have to look very far to find something to protest about, so the time is right for a Ranchers for Peace gig. The father-daughter duo pens spot-on songs that would make Phil Ochs proud. “Considering how truly peaceful things are becoming in this dear old world of ours, we figure we’re done for the year. Good news, right?” joked Chas Duncan, R4P patriarch. “In truth, as End Times draw near, we feel obligated to do what we can to preserve the health of our loyal followers by minimizing their exposure to large crowds. Can’t be too careful these days. And, since tears are now just one more vector for disease proliferation, the possibility that one of our songs might provoke an openly emotional response is too great a risk: On this Ranch, the well-being of our Ranch Hands is Job One. Always has been, always will be.” See them Sunday, Nov. 2, at 3 p.m. in Los Osos’ St. Benedict’s Episcopal Church in a benefit for People of Faith for Justice (peopleoffaithforjustice.org). Singer-songwriter and banjoist Erin Inglish will be along for the ride in this concert that will be recorded for a live album.