It’s Sunday, Dec.6, and my wife and I grab a couple of barstools at Bang the Drum Brewery and settle in with a few microbrews to listen to one of our favorite performers, Jody Mulgrew, the peripatetic singer-songwriter who’s playing to a small but appreciative crowd in the intimate and homey venue. 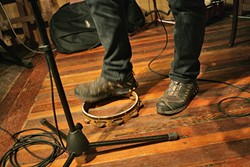 When we arrive, he’s performing Ben E. King’s “Stand by Me,” tapping his toe on a tambourine for percussion and raising his voice into a silvery and soaring falsetto as his sings, “If the sky that we look upon should tumble and fall or the mountain should crumble to the sea, I won’t cry. I won’t cry. No I won’t shed a tear just as long as you stand, stand by me.”

He’s now telling the audience about the next song he’ll perform, which was co-written with Nashville singer-songwriter Bob Rea (pronounced Ray). Called “Darkest Night,” Rea got the idea from an NPR news report about what was to be the darkest night in 500 years.

“It was the darkest night in 500 years according to the radio, but all the darkness just disappears in the static of the neon glow,” Mulgrew sings. “Oh my darling, I’ve been missing you. Oh, oh my darling, it seems it’s all I ever do. There’s no promise of salvation. It’s just another load that we tow to an unknown destination down a long empty road.” 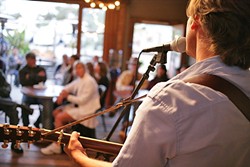 The song, and much of the new album, was recorded in Bob Rea’s bathroom in his house on the “historical” side of Nashville, meaning the un-gentrified side, which Mulgrew describes as mostly “shotgun shacks with angry dogs chained up in the front yards.”

Next Mulgrew is preparing to play his new album’s lead track, “On the Line,” which he explains was written for his girlfriend, who’s in the audience. I’d texted Mulgrew earlier to tell him I’d be showing up with my camera so he better look pretty.

Mulgrew grew up on the likes of Sam Cooke and other soulful crooners, and he’s adopted their elastic vocal style that traverses octaves with ease. If you hear his recordings, it’s not always immediately clear if it’s a man or woman singing—it’s a voice that transcends gender and convention.

He next breaks into “Till My Peace Be Made,” a song he wrote during The Johnny Starlings years, and it sounds like it could have been written a hundred years ago in the Appalachians: “Till my peace be made and my sable soul be saved, I will wander these cold hills without you. Till the warm sun shines on this wary heart of mine, this path will ever wind till my peace be made.”

It’s a heartbreaker, and so is Jody Mulgrew, who writes songs so tender and beautiful they’ll leave you aching for more. He’ll return to the area next year to play two shows with fiddler John Nowel on Thursday, Jan. 21, at Luna Red (10 p.m. to midnight); and he’ll play his official album release party for As the Sun Reclaims the Sky on Saturday, Feb. 6, at Steynberg Gallery (7:30 p.m.; $15). In the meantime, pick up a copy of his CD at local record stores, online at mulgrewskeletoncrew.com, or the usual places such as itunes.apple.com and amazon.com.