Grand wizard of musical alchemy, Joe Craven, is coming to town this weekend, a reminder that the Live Oak Music Festival, which he emcees, is coming up on Friday, June 16, through Sunday, June 18. If you order your tickets by Friday, March 17 (online at liveoakfest.org/tickets or by calling 781-3030), you’ll get the early bird discount! 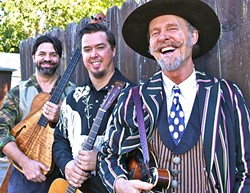 Craven is a master performer—a stellar musician, deft storyteller, and staunch believer in the “no genre left behind” policy of music making—and his show is nothing short of mesmerizing, as he and his band blend upright and electric bass, various guitars, dobro, lap steel, mandolin, octave mandolin, fiddle, cowbell, and a grab bag of random percussion instruments.

Featuring Bruce MacMillan and Jonathan Stoyanoff, The Sometimers are a self-described “NorCal Free Range Folkasaurus Trio,” and their album Blender “celebrates a new kind of POP music, as in the ‘Pursuit of Possibility,’” according to the band.

This is going to be epic fun!

Return of the Real! 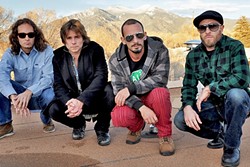 Remember that one time Willie Nelson’s kid Lukas Nelson and his band played the old SLO Brew location and then Neil Young showed up virtually unannounced and played songs from his new album The Monsanto Years? Yeah, good times.

That was back when Todd and Korie Newman were booking SLO Brew, but now they’re running Good Medicine Presents, who along with Numbskull Productions have teamed up to bring Lukas Nelson & Promise of the Real back to town this Friday, March 3, to play the SLO Guild Hall (7 p.m.; all ages; $18 presale at Boo Boo Records or ticketfly.com).

I wouldn’t expect a return of Neil Young, but you can expect a night of ripping rock ’n’ roll. The band has released three albums—Promise of the Real (2010), Wasted (2012), and Something Real (2016)—and they were also the backing band on Young’s Monsanto record. These guys are old-school rockers, with shredding guitar, a rollicking backbeat, and Nelson’s electrifying vocals. This one’s gonna rock!

Numbskull and Good Medicine also host pop-punk singer-songwriter Laura Stevenson on Monday, March 6, at Sweet Springs Saloon (7 p.m.; 21-and-older; $10 at ticketfly.com). The New York-based performer recently released her fourth album, Cocksure, and has toured alongside acts such as Against Me!, The Go-Go’s, Kevin Devine, Tim Kasher of Cursive, and The Gaslight Anthem. Her previous album, Wheel, featured her folk and country leanings, but Cocksure is straight up rock! Fans of Liz Phair, check her out!

Dan Curcio, who performs under the moniker Moonshiner Collective, makes his debut at the new SLO Brew (he played the old location 1 trillion times), and he’ll be presenting the one-man band stylings he’s been working on … but will still let his pals join in.

His various bands—Long View, Still Time, and Moonshiner—have had the most sold out shows in SLO Brew’s storied history! This time Curcio is performing in support of his new Moonshiner EP Fables of Our Youth, a great collection of thoughtfully constructed folk songs.

The video for “Small Town Love,” from which the EP draws its name, is a tender ballad of the good old days: “In the fables of our youth/ Some joys wrapped in blurred regret/ When dividing lines of streaks and glows/ Fell from smothered cigarettes// To the old market where we smoked ’em/ Stole a penny gum or ten/ Now bein’ dozed for Costco / And Wal Mart’s to the left// To the ghosts lined up on Main Street/ Now singin’ corporate songs/ The melodies both haunting and familiar/ Are long gone// Oh my small town love/ Never thought we’d change when we grew up,” Curcio sings over vintage footage of the Central Coast.

He’s an emotional resonant performer, and you can get a taste of his one-man-band sound on his video for “Come Alive,” which was filmed in his bitchin’ home studio and shows him playing guitar and using his custom foot percussion setup. 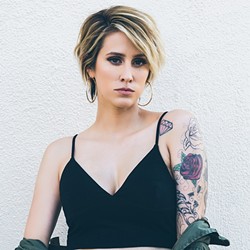 “I had an incredible nine-year run with my previous band Still Time and I felt like I really did the six-person band brotherhood for a good while and enjoyed every minute of it,” Curcio said. “At this point in my career, I really find inspiration and creativity in incorporating many different musicians from all different musical backgrounds to continually evolve and expand on the songs I’ve already written as well as the songs I’ve yet to write. I love mixing it up and having each album, each show, and each song be unique to themselves and feature different collaborators and inspirations. My new setup with the foot percussion allows me to play the core of the music and then add talented collaborators based on the shows and settings. It’s been a challenge for sure to get all these instruments working together at the same time, but I’ve been spending long days and nights in the jam room, and I’m really happy with how it’s coming together.”

Check out Moonshiner Collective and special guests on Friday, March 3 (10 p.m.; 21-and-older; $10 at ticketweb.com). The first 100 people through the door will get a free copy of Fables of Our Youth. 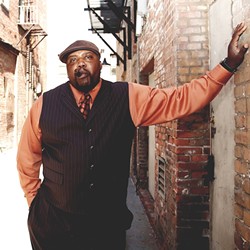 Caron “Sugaray” Rayford can seem like he’s channeling the ghosts of Muddy Waters or Otis Redding, with one foot in old-school blues and the other in Motown soul. The Texas-born bluesman started singing and playing drums in church at age 7, and you can still hear some gospel in his sound.

The Sugaray Rayford Band plays the next SLO Blues Society show at the SLO Vets Hall on Saturday, March 4 (8 p.m.; 21-and-older; $25 at Boo Boo Records, Cheap Thrills, or at the door). The Irene Cathaway Rhythm and Blues Band will open the show.

Rayford is an old-school belter with a dynamic voice that commands the room. In the late 1990s, “he left Texas, moved to San Diego, and realized the blues was where his heart and soul belonged. He became lead vocalist for R&B band Aunt Kizzy’z Boyz, which earned second place in the 2006 International Blues Challenge. He moved to Los Angeles where he hosted a regular blues jam at Cozy’s in Sherman Oaks, which exposed him to the LA blues music scene,” according to his bio.

This guy’s the real deal!

“I’ve been trying to get these guys down here for quite awhile,” said KCBX DJ, jazz aficionado, and concert promoter Fred S. Friedman. “Drummer Scott Amendola and organ/keyboard player Wil Blades have been generating a buzz around the Bay Area for quite some time. Scott’s inspiration stems from such stylistic influences as jazz, African music, blues, and rock. Wil has kept the traditional sounds of Jimmy Smith, Larry Young, and ‘Groove’ Holmes alive, while creating a more personal sound. For the last three years, he’s been named in the Downbeat critics poll under ‘Rising Star’ for organ.”

Modern Drummer magazine said, “Amendola has complete mastery of every piece of his drum set and the ability to create a plethora of sounds using sticks, brushes, mallets, and even his hands.”

The Youngest, a Chicago-based rock act, brings its upbeat sounds to Frog and Peach on Thursday, March 2 (10 p.m.; 21-and-older; free). They’re touring in support of their sophomore album, See It Through, which features special guest Pat Sansone (Wilco).