Excuse me while I age myself. When Joe Jackson released his debut album Look Sharp! in 1979, I was a high school junior, and the album was a revelation. I listened to it more times than I could count. "Is She Really Going Out with Him?" "Fools in Love." What teenage boy didn't know and understand exactly what Jackson was singing about?

He followed up his debut three months later with I'm the Man, essentially a Part Two to Look Sharp! It was filled with more amazingly hooky New Wave tracks that became teenage anthems to my surf buds and me. We'd sing along at the top of our lungs and get amped for a surf session.

We had to wait until the following October in 1980 for Jackson to blow our collective minds with Beat Crazy, which shifted away from the first two albums into reggae and ska influences. I credit Jackson—and Elvis Costello—with expanding my horizons beyond The Cars, Sex Pistols, and The Clash.

Joe Jackson has always been a musical moving target. In 1981, he released Jumpin' Jive, filled with classic jump blues tracks by Cab Calloway, Louis Jordan, and Busby Meyers. He got supper club jazzy on Night and Day. It sort of felt like Jackson was either mirroring or leading my musical expansion and awakening.

"The show will feature both the full band and a 'mini set' of Joe solo," organizers said. "The songs will be drawn from Joe's whole career, including some that haven't been heard live in many years. Watch out also for some surprises, including some completely new material. The tour will take the band to some cities Joe has never been or hasn't played for a long time."

I'm there! Also at the Fremont, it isn't music, but comedian Eddie Griffin will perform on Friday, June 3 (8 p.m.; $56.50 to $88 at eventbrite.com). The actor known for Undercover Brother, Deuce Bigalow Male Gigolo, and Norbit, as well as his stand-up comedy specials, will bring the hilarity.

Don't forget Paramount's Laser Spectacular featuring the Music of Pink Floyd happens on Thursday, June 2 (7:30 p.m.; all ages; $31.50 to $41.50 at eventbrite.com). Expect a laser show choreographed to the music of Pink Floyd.

A lot of the best country music songs are narrative, telling stories about killing a man in Reno, Lucille picking a fine time to leave, or lights going out in Georgia. Add Jon Wolfe to this fine tradition. In "That Girl In Texas," the protagonist wakes up "not feeling right," and "it wasn't the beer" he "drank last night." Nope.

"I miss those Saturday nights and honky-tonks and rodeos/ The way the sun sets in the hills of San Antonio/ Her beautiful smile, bright blue eyes/ Holdin' her close in the moonlight/ What I miss most is/ That girl in Texas."

"At heart, it's all about being a great singer and storyteller," Wolfe explained in press materials. 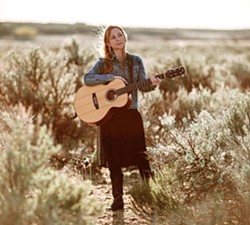 She's backed by a terrific band and explores a wide variety of genres: folk, classic country, early blues, surf-noir, and 1960s era rock 'n' roll. American Songwriter describes her as "one of America's most intriguing, creative, and idiosyncratic voices."

"Her songwriting is keen and sharp, reflecting contemporary events," SLOfolks says. This one's outdoors, and food and drink are available for an additional charge.

Bob Marley's legacy will be on display this weekend when Stephen Marley plays Vina Robles Amphitheatre on Saturday, June 4 (8 p.m.; $39.50 to $49.50 at ticketmaster.com), with Stephen's nephew and Bob's grandson Skip Marley opening.

In this rescheduled concert—part of Stephen's 2022 Babylon by Bus Summer Tour—the eight-time Grammy Award-winning singer, songwriter, producer, and guitarist plays with his band during a 20-date run that "will showcase a mixture of original songs from his illustrious 40-year career, as well as revitalized classics from his father Bob Marley's iconic catalog," press materials explain.

A dollar from each ticket benefits the Ghetto Youths Foundation that provides aid, resources, and opportunities to communities in need, "including his father's birthplace of Trenchtown, Jamaica, where nearly 100 percent of the population lives below the poverty line."

Zamrock at The Rock!

SLO Brew Rock hosts an evening with W.I.T.C.H. (We Intend To Cause Havoc) next Thursday, June 9 (7 p.m.; all ages; $20 at ticketweb.com). Back in the '70s, they were Zambia's biggest rock act, spearheading what became known as Zamrock—"fusing influences that ranged from the Rolling Stones to Black Sabbath and James Brown and mixing them with traditional African rhythms and bush village songs," according to organizers. "At the peak of their popularity, the band often needed police to keep fans at bay while their lead singer Jagari—whose name is an Africanization of Mick Jagger's—riled up crowds by stage diving from balconies and dancing manically as the W.I.T.C.H.'s blend of psychedelic rock and African rhythms permeated the surrounding atmosphere."

Mo Betta Jazz presents the return of jazz vocalist Deborah Gilmore on Saturday, June 4, at the Fremont Theater (8 p.m.; $20 students and $25 general admission, children 12 and under free, at my805tix.com). In a concert called Don't You Worry About a Thing, Gilmore will perform jazz standards backed by a band of jazz professionals and college performers.

The Cal Poly Arab Music Ensemble will be joined by the Zaryab Ensemble on Saturday, June 4, in Cal Poly's Spanos Theatre (7:30 p.m.; $10 for students and $20 general admission at (805) 756-4849). The two ensembles will perform separately and as a combined group, delivering vocal numbers, instrumentals, and a dance troupe.

Enjoy a picnic with family and friends in the Jack House's beautifully landscaped gardens when The Wavebreakers Band plays an afternoon of classic pop rock on Sunday, June 5 (1 to 4 p.m.; all ages; free). Bring picnics and blankets. Trained docents will offer historic Jack House tours for $5.

The Cal Poly Symphony and Cal Poly Choirs will perform Ralph Vaughan Williams' "Dona Nobis Pacem" and William Grant Still's "Afro-American Symphony" on Sunday, June 5, in Miossi Hall of the Performing Arts Center (3 p.m.; $15 to $20 general admission, $10 for students, at (805) 756-4849). "Both momentous works were composed in the 1930s and addressed issues of that time that are equally relevant today," according to organizers. Δ