Running. You either really, really love it, or you hate it with the fire of a thousand burning suns. There is no middle ground. Because running is the worst. It’s not overdramatic to say that it will destroy you and everything that you hold dear.

Not that many people will acknowledge this incredibly true, not made-up fact. A report released by Running USA found that the number of half-marathon finishers increased by 284 percent since the year 2000. And in the year 2012 there were 1.85 million marathon finishers in the United States. Apparently, people are easily swayed by not being able to breathe for more than 20 miles, and monster blisters forming on the bottom of their feet. Which explains why the SLO Marathon is returning for a fourth year this April. 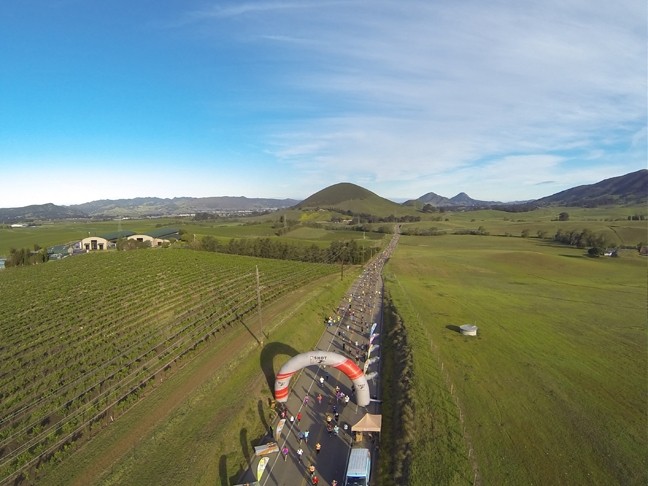 “I think [marathons] are so popular because it’s a great sense of accomplishment,” Heather Hellman, the event director of the SLO Marathon, said. “People do these races for so many reasons: raising money for charity, to stay fit, to get back in shape, or for a loved one. It’s really gratifying to see people finish and the huge smiles on their faces.”

The full marathon, which is 26.2 miles, and the half marathon—13.1 miles—will be held on April 26, starting at SLO High School and ending at the Madonna Inn. In addition, there will be a 5K run (or 3 miles), and a Kids Quarter Mile and a Fun Run mile on April 25.

And for those who are not ready, there will be a fitness day, which includes free events for families such as soccer, sack races, gymnastics, baseball, and a demonstration from the Cal Poly women’s basketball team.

Of course Hellman would have us believe that completing a marathon is not as hard as most people believe. In the immortal words of Cher Horowitz, “As if.”

“For people who are intimidated, or have never run a half-marathon or a marathon but want to, there is no way better than to begin a journey with one small step,” Hellman said. “Start by walking. Just buy a good pair of shoes and walk out the door. We have many people who walk our half-marathon. It takes time training for a marathon, but it’s possible.”

That still begs the question of why anyone in their right mind would want to run a marathon. Or you know, walk a marathon. Because walking is just like really slow running. You’re just dragging out the pain and misery.

“There is another level of self-confidence because completing one is no small feat,” Hellman said. “The person has dedicated 16 to 20 weeks of running say a minimum of three times a week, sometimes four to five times a week, to be in shape to finish the event. If you can finish running a marathon, you think there is nothing that can’t be accomplished with effort and heart.”

The SLO Marathon will be on April 24 through 26, for those who want to dive straight into the insanity. The marathon and half-marathon will start at San Luis Obispo High School, and both will finish at the Madonna Inn. The 5K race and kid’s fun run will start and finish within the Madonna Inn Property. For more information about the event, or to register, go to slomarathon.com.

McCarthy’s is holding its AIl-In Student Challenge this spring, dedicated to promoting safe driving habits as an expansion of the Sober Driving Program. The challenge is open to all students aged 16 years and older enrolled in high school, community college, or university in San Luis Obispo or Northern Santa Barbara counties with a valid California driver’s license and a student I.D. Those who enroll have the chance to win a Scion tC or $500 in scholarships. The awards ceremony will be at McCarthy’s at 43 S. Higuera St. on May 30 at 11 a.m. For more information, or to enter, go to allindriver.com.

Intern Adriana Catanzarite wrote this week’s Strokes and Plugs from her couch. Send your business and nonprofit news to strokes@newtimesslo.com.