John Craigie and Shook Twins come to the CPAC at Cuesta College on Nov. 23

John Craigie has been compared to everyone from John Prine to Bob Dylan. He embodies the classic singer-songwriter ethos—a desire to connect to his listeners and dissolve the wall between performer and audience. If you happened to catch him last summer at the Live Oak Music Festival at El Chorro Regional Park, you know just how good he can be, and this Saturday, Nov. 23, he's playing across the highway from Live Oak at the CPAC at Cuesta College with special guest Shook Twins (7 p.m.; all ages; $21 presale at eventbrite.com or $25 at the door). For every ticket sold, $1 will be donated to Planting Justice, "a grassroots organization with a mission to empower people impacted by mass incarceration and other social inequities with the skills and resources to cultivate food sovereignty, economic justice, and community healing."

There are songs like "Live With Less" about the freeing feeling of shedding the unnecessary, songs like "All the Salt" about the need for change, and then you've got straight-up funny songs about the travails of the troubadour lifestyle, like "Bucket List Grandmas": "Y'all got your groupies they hang and they linger/ I've got bucket list grandmas and young male folk singers/ They're asking me questions trying to get some gigs/ I say, don't be in such a hurry to lose everything/ Cause I binged last night and I'm starving today/ In this goddamned job there ain't no consistency."

His most recent album also boasted two collaborations with Gregory Alan Isakov—"Highway Blood" and "I Am California"—which both scored a million Spotify streams and counting. He's definitely on a roll!

Likewise, Shook Twins are on the rise. Their fourth full-length, Some Good Lives, finds the identical twin sisters—Katelyn Shook [vocals, guitar] and Laurie Shook [banjo, vocals]—paying homage to everyone from a late grandpa and godfather to Bernie Sanders.

"We realized there was a theme," Katelyn explained in press materials. "Even though our minds are mostly on the women of today and wanting the monarchy to rise up, we have several men in our lives who have been such positive forces. We wanted to thank them and honor the good guys who showed us the beauty in this crazy world we live in. So, it's an album for some good lives that have crossed paths with ours—and to them, we are grateful."

Laurie agreed: "It's also an acknowledgment of our thankfulness of the good life that we get to live."

This ought to be a wonderful evening of acoustic music, and if you haven't been in the CPAC, you're in for a treat. It's an intimate venue with amazing sound, and I'm pretty sure Craigie and Shook Twins will collaborate!

Also this week from Numbskull and Good Medicine Presents, check out amazing soul band Soul Scratch at The Siren on Friday, Nov. 22 (7 p.m.; 21-and-older; $15 at Boo Boo's and eventbrite.com). If you're a fan of Nathaniel Rateliff & The Night Sweats or St. Paul and The Broken Bones, you'll dig these guys too.

As lead singer Dale Spollett said in press materials: "We are on a mission to cure the world of hate, and educate all people in the power of love, peace, and music." 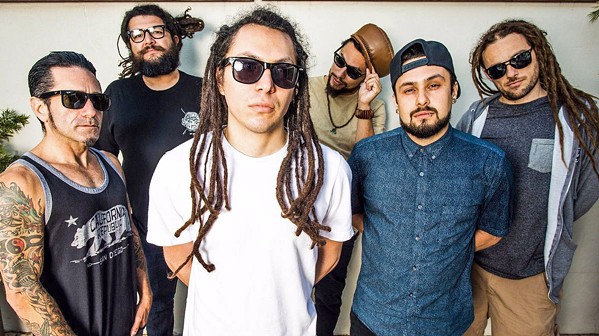 Reggae to the rescue

Over at the Fremont Theater, check out San Diego-based rock-reggae act Tribal Seeds this Thursday, Nov. 21 (7 p.m.; all ages; $30.83 at Boo Boo's and fremontslo.com), with Tropidelic. According to the Seeds' bio, they're "more influenced by bands like Steel Pulse and Aswad than the common touchstone of Sublime."

Formed in 2005, they're becoming touring favorites on the Central Coast, and they're well respected in their hometown too. In March 2017, Tribal Seeds won the San Diego Music Award for Artist of the Year.

If you were hoping to see Hippo Campus on Friday, Nov. 22, it's sold out.

The SLO Brew Rock Event Center, which did an amazing job hosting this year's New Times Music Awards, hosts Hirie on Friday, Nov. 22 (7 p.m.; 18-and-older; $15 at slobrew.com). The band Hirie is fronted by the woman Hirie, a true global citizen who was born in the Philippines, spent years in Italy, and finally settled with her family in Hawaii, thanks to a father who worked for the United Nations. She's definitely got a wide-view perspective on the world!

Special guests RDGLDGRN and Tunnel Vision will open the show!

Joey Harkum will stop on by the Frog & Peach Pub this Thursday, Nov. 21 (7 p.m.; 21-and-older; free). After a decade of touring as the lead singer and songwriter of Baltimore-based band Pasadena, he released his debut solo album, Love and Labor, to critical acclaim in 2016. He's continued to tour solo, and, according to press materials, he's become known for "his deep and poignant lyrics telling stories of joy, love, loss, and sadness. [He] brings the human experience to life through his relentless tour schedule that culminated in the release of Live at Buffalo Iron Works in 2018."

I miss having hip-hop artist James Kaye in the neighborhood, but the gifted performer blew this popsicle stand for the richer opportunities of LA. He still makes it back once in a while. He just showed up at this year's New Times Music Awards to perform with Hip-Hop/Rap winner Kody Balboa. He's returning again this Saturday, Nov. 23, at The Siren, for the "Long Hauliday" hip-hop party, which also features Wynn (7:30 p.m.; 21-and-older; $12 presale at Boo Boo's or eventbrite.com, or $15 at the door). DJ Sevens will be spinning beats, and Kaye and Wynn will also be joined by local hip-hop favorites Lorde Sanctus, Kody Balboa, Risko, Howflyy, Cam Jones, and 22 Rell.

The Clark Center hosts Little Texas this Saturday, Nov. 23 (7:30 p.m.; all ages; $45 to $55 at clarkcenter.org or (805) 489-9444). Known as "the hardest working band in country music," they've released six albums, scored multiple top 10 hits, garnered three Grammy nominations, and won a Best Country Album at the Country Music Awards! Hear hits such as "God Blessed Texas," "What Might Have Been," and "My Love."

Longstanding horn-driven R&B act Cold Blood, which later became Lydia Pence & Cold Blood, got its start in 1969 when Bill Graham's The Fillmore was at its peak, and as soon as he heard the band, Graham signed them to his record label. They went on to record hits such as "You Got Me Hummin," "Too Many People," and "I'm a Good Woman," and became—along with Tower of Power—what was labeled East Bay Grease. In a pretty amazing "get," Rancho Nipomo BBQ & Deli has booked the band for a show on Sunday, Nov. 24 (doors at 5:30 p.m.; show at 6:30; 21-and-older; $20 presale at my805tix.com or $24 at the door).

Harlem 100 featuring Mwenso & the Shakes comes to the Clark Center this Sunday, Nov. 24 (7:30 p.m.; all ages; $45 to $58 at clarkcenter.org or (805) 489-9444). Special guests include Brianna Thomas, Michela Marino Lerman, and Vuyo Sotashe, who will celebrate the 100th anniversary of the Harlem Renaissance with a multi-media show that "captures the sights and sounds of Harlem when legendary artists such as Duke Ellington and Billie Holiday made Harlem the cultural center of the country," according to press materials. This touring show was created in collaboration with the National Jazz Museum in Harlem and JMG Live. Δ