John Hiatt is unequivocally one of the most lauded and respected singer-songwriters in American music, but it wasn't always that way. The one-time car thief, whose brother committed suicide when he was 9 and whose father died when he was just 11, left home at 18 and worked as a $25-a-week Nashville songwriter for Tree-Music Publishing Company.

He was later signed to Epic Records, where his first taste of success came when Three Dog Night recorded his song "Sure As I'm Sitting Here," taking the song to No. 16 on the Billboard chart. He released his own records, most of which were critically acclaimed and commercial failures. Epic eventually released him from his contract, but he was picked up by MCA ... until they released him. 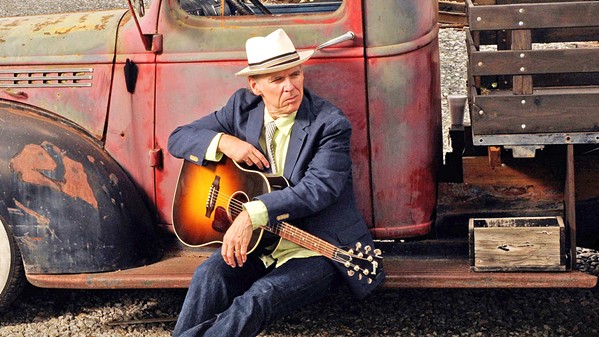 Even though his records still failed to sell, a lot of artists started covering his songs: Freddy Fender, Willie Nelson, Rubén Blades, Bruce Springsteen, B.B. King, Bonnie Raitt, Bob Dylan ... the list goes on and on.

It wasn't until 1987 and his eighth album, Bring the Family, and its hit "Have a Little Faith in Me," that Hiatt finally knew real success, and he followed it up with his 1988 album Slow Turning, the title track of which climbed to No. 8 on the Mainstream Rock Tracks chart. The album also featured the song "Tennessee Plates," which wound up on the Thelma and Louise soundtrack in 1991.

The show will re-create the Slow Turning album in its entirety, followed by a set of Hiatt's greatest hits. Slide guitar player Sonny Landreth will play with Hiatt and The Goners.

Hiatt now has 22 studio albums to his credit, most recently 2014's Terms of My Surrender, so he's got a plethora of material to draw from. He's 65 now, but he still knows his way around a song.

"Doesn't bother me," he said of his age in press materials. "Shit falls apart and I can't remember anything, all that stuff. But the plusses outweigh the minuses for sure."

Numbskull and Good Medicine Presents have teamed up with Morro Bay's The Siren to bring The Show Ponies on Friday, March 16 (8 p.m.; 21-and-older; $13 presale at Boo Boo's and ticketfly.com or $15 at the door). The band may have formed in Los Angeles, but they're country through and through.

Their 2013 debut We're Not Lost was entirely crowd-funded and filled with energetic Americana, and the quintet recently released their follow-up crowd-funded album How It All Goes Down. Both albums have a wry sense of humor.

"I like whiskey; you like wine/ You're the kind of woman/ That's so refined/ I like horses; you like gin/ I told you never come around here again// But we're so far apart/ Different heads/ And different hearts/ You're always at the end/ Before I start. Oooohhh/ I hate your guts but you got soul."

They're a lot of fun!

If you were hoping to see Donavon Frankenreiter at The Siren on Thursday, March 15, and you didn't get tickets, it's sold out, but The Siren has a fun St. Paddy's Day cooked up for you on Saturday, March 17, starting with Prestige (2:30 to 5:30 p.m.; 21-and-older; free), which plays '60s and '70s R&B and soul à la the Atlantic, Stax, and Motown records. Later that night, check out the Jack Mosbacher Band (9 p.m.; 21-and-older), whose "thoughtfully crafted traditional hooks and cheerful Motown vibes have drawn comparisons to The Temptations, Hall and Oates, and Otis Redding," according to press materials.

Get your Irish on! 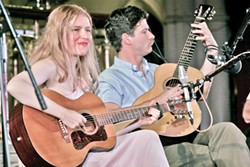 "Leading up to the féile (Irish word for festival, pronounced Fay-leh) the population of Parkfield will nearly double from 18 people, as 13 Irish musicians, artists, chefs, and more will make their way over from Ireland to write, collaborate, perform, and celebrate St. Patrick's Day," organizers said. 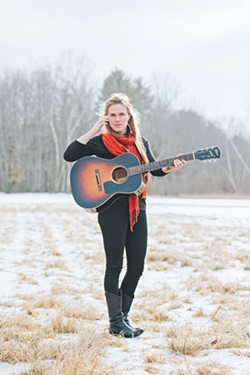 Singer-songwriter Caroline Cotter is the featured performer on Thursday, March 15 (6:30 p.m.; all ages; free), during the next Songwriters at Play showcase at 7 Sisters Brewing in SLO Town. Cotter recently released her second album, Home of the River, a 10-song collection of poignant Americana songs. Cotter's got a sweet voice and ideology worth adopting: "I've talked with many people who see the goal of a music career to be wealth and fame," she said in press materials, "but when I thought about it and really dug deep, I realized that everything I'm doing is to move forward with peace of mind. I'm taking the focus off of material wealth and recognizing that none of it matters if you don't have peace of mind." She'll play a 45-minute set at 8:15 p.m.

Salinas-based acoustic style power duo Six String Pharmacy plays the Frog and Peach this Thursday, March 15 (7:30 p.m.; 21-and-older; free). "Six String Pharmacy is composed of longtime music veterans and collaborators El Cajon and Mr. X," their bio reads. "Their prescription for what ails you is found in the multi-colored sounds that they deliver through various instruments and vocal harmonies." Judging by the one video I saw online, their lead singer has a decidedly '90s grunge voice—although, he was covering a Stone Temple Pilots song.

Divided Heaven (aka Jeff Berman) has returned to the area to play Paso's The Pour House on Friday, March 16 (8:30 p.m.), touring in support of his new EP, Pacific Avenue. I believe Berman is touring solo, but his EP features full rock instrumentation with ripping guitars and Berman's classic alt-rock vocals.

Burning James and the Funky Flames will play Tunes and Noodles, a fundraiser for Los Osos Middle School and Del Mar school's PTAs, this Saturday, March 17 (doors at 5 p.m.; dinner at 6 p.m.; all ages; $15), in the Morro Bay Vets Hall. Enjoy dinner, music, dancing, and student performances. Like last year, there'll be door prizes, a silent auction, a raffle, and kids games outside on the patio.

The always excellent Café Musique plays the Cambria Center for the Arts Theatre (CCAT) this Sunday, March 18 (2 p.m.; all ages; $20 at brownpapertickets.com). This marks the second show in CCAT's new "Cabar-esque series"—a series of concerts and spoken word performances throughout the year. This time around, hear a remarkable mix of Gypsy jazz, swing, tango, folk and "wild classical" music. 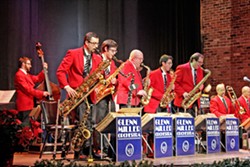 "In the Mood," "Tuxedo Junction," "Moonlight Serenade"—the Glenn Miller Orchestra has been responsible for so many swinging big band hits, and though Miller is gone, his orchestra lives and will make a stop at Arroyo Grande's Clark Center this Sunday, March 18 (3:30 p.m.; all ages; $39 to $49 at (805) 489-9444). Currently under the direction of vocalist Nick Hilscher, the world famous Glenn Miller Orchestra carries on. Δ