It took John Hiatt a long time to find his place in the music world. He headed to Nashville in 1970 and was discovered by an Epic Records talent scout, eventually recording two critically acclaimed records—1974’s Hangin’ Around the Observatory and 1975’s Overcoats—that garnered few record sales.

Then label-less, he did a few years of solo touring before signing to MCA, releasing two more records: 1979’s Slug Line and 1980’s Two Bit Monsters. At this point, he hadn’t even settled on a sound. These two records were vaguely New Wave-ish. 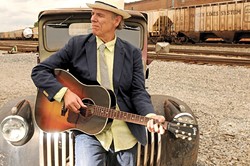 He then hooked up with Ry Cooder, where he sang a couple of songs on the soundtrack to the 1982 Jack Nicholson film The Border. His unfortunate pattern of great reviews and poor sales continued after he signed with Geffen Records, releasing 1982’s All of a Sudden. He also struggled with alcoholism and the suicide of his first wife, and Geffen dumped him.

Things could have gone either way at this point. He could have continued to circle the drain until his life was flushed away, but instead he got sober, remarried, signed to A&M Records, enlisted Cooder and bassist Nick Lowe and session drummer extraordinaire Jim Keltner and recorded 1987’s Bring the Family, a rootsy mix of rock, blues, and folk. It was his eighth album and the first to reach the charts.

Since that rough beginning, he’s released a total of 22 records, most recently 2014’s Terms of My Surrender.

“This record kind of hooked back up with the John the Troubadour Folk Singer Blues Guy,” Hiatt explained in press materials. “I hadn’t really been doing that for a while. That feels good. Feels like a kid. And anything you can do to feel like a kid when you’re my age [63], you want to do it. It’s a good thing.”

While his record sales have never been brisk, Hiatt’s always had a loyal fan base, and his songs have been recorded by everyone from Rick Nelson and Dave Edmunds to the Searchers, Three Dog Night, Iggy Pop, Bob Dylan, and Bonnie Raitt.

“He earned a Grammy nomination for Crossing Muddy Waters, while B.B. King and Eric Clapton shared a Grammy for their album Riding With The King, the title track from which was a Hiatt composition,” according to Hiatt’s bio. “He’s received his own star on Nashville’s Walk of Fame, the Americana Music Association’s Lifetime Achievement Award for Songwriting, has been inducted into the Nashville Songwriters Hall of Fame, and was saluted at the Indiana Governor’s Arts Awards.”

This weekend’s concert marks Hiatt’s first return to the Central Coast in decades.

“John Hiatt first graced the Fremont Theater on March 30, 1994, in a show presented by local radio station K-OTTER 94.9 FM,” concert promoter and former K-Otter owner Bruce Howard wrote in press materials, “and he returns 22 years later, on Friday, March 11, supporting his newest release Terms of my Surrender,” (doors at 6 p.m.; show at 8 p.m.; all ages; tickets are $40 plus fees at all Vallitix locations including Boo Boo Records or at vallitix.com).

Expect Hiatt to perform a mix of his classics such as “Crossing Muddy Waters,” “Thing Called Love,” and “Have A Little Faith In Me,” as well as newer work.

Couples Mark Davis and Karoline Hausted, and Bob and Wendy Liepman are each in their own right fantastic musicians, and Mark, Karoline, and Wendy are each amazing songwriters. They all would have had perfectly fine careers if they had never met, but they did meet, found kindred spirits, created musical synergy, and become Shadowlands. 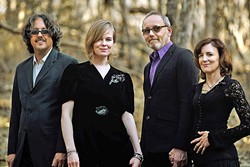 Their first self-titled album won Second Place in the NTMA Album of the Year competition in 2015. They were invited to play the main stage at last year’s Live Oak Music Festival. Their songs can frequently be heard on public radio station KCBX 90.1 FM. Now the ethereal folk pop quartet is returning to Steynberg Gallery for an intimate concert on Saturday, March 12 (7:30 p.m.; all ages; $15 tickets by calling 547-0278).

“We’ll perform recent songs that explore new directions instrumentally and stylistically,” Bob Liepman explained. “After returning from a stay in Denmark, Karoline Hausted and Mark Davis picked up writing and rehearsing again with Wendy and me, completing several new songs that were in the works. The Steynberg show will kick off a series of shows, including a Bay Area tour next month.”

I hope this means a new album is in the works! Don’t miss this stunning supergroup!

Music to laugh your ass off to

“There’s no real definition for what we do,” Igudesman said in press materials. “It’s a kind of theatrical comic event that works on multiple levels.”

The violinist and pianist are both classically trained musicians, but if you’re expecting a stuffy, self-serious performance of the three Bs, you’re more likely to get a mix of “Bach, Beethoven, and Bond, James Bond,” from these “huge cult music figures whose infectious lunacy and musical mash-ups of music, humor, and pop culture have made them a global hit show and viral sensations whose YouTube performances have attracted 40 million views, with an audience that’s young and hip.”

“The guys share the subversive comedic sensibilities of South Park, SNL, Ricky Gervais, and the Portlandia team,” according to their bio. “They transform the concert stage into a musical Pee-wee’s Playhouse. They don’t just play the violin with a vibrating milk frother or use wood blocks to tickle the ivories, they do it with dazzling virtuosity.”

“Aleksey and I have a Ping-Pong relationship,” Joo said. “Ideas get flung back and forth quickly though it often takes a long time before a sketch is really ready to present to an audience. The performances’ seeming spontaneity is the result of shows crafted with the utmost precision.”

Nashville-based singer-songwriter Matt Bednarsky headlines the Thursday, March 10, Songwriters at Play showcase at the Shell Café (6:30 p.m.; all ages; pass the hat). According to the concert promoter, “Bednarsky’s unique music blends pop-rock, folk, jazz, and blues and is characterized by poignant, thoughtful lyrics and soothing yet powerful vocals.” 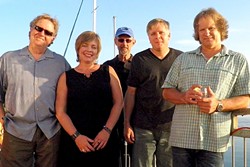 The SLO County Jazz Federation presents a showcase of this year’s winners of their Young Jazz Scholarship Program on Sunday, March 13, in the Steynberg Gallery (4 p.m.; all ages; free). “This program, started in 1983, awards scholarships to talented and deserving students from local schools in an effort to further their musical development and to keep the jazz tradition alive,” according to the Jazz Fed. “This year’s recipients are Breanna Chambers (trumpet) and Ben Rosenberg (saxophone) from SLO High; Addison Rifkind (guitar) and Michael Woodson (trumpet) from Cal Poly; and Matthew Evans (bass) from Cuesta College. They’ll be backed by a rhythm section of Darrell Voss (drums), Gary Drysdale (guitar), and Ken Hustad (bass). The Matt Taylor Memorial Trust sponsors the concert. Call 546-3733 for more info.

Spin you right round!

It’s time for another SLO Record Swap this Saturday, March 12, from 1 to 5 p.m. in the SLO Grange Hall ($1 entry free; kids 12 and under are free). I attended the last one in November, and it’s a real gathering for music lovers. They had more than 500 attendees and 17 vendors, and I snagged a few sweet albums. If you’re a record collector, there’s a lot to see and buy. If you want to become one, there are also record players for sale and plenty of knowledgeable folks to help your foray into an incredibly rewarding hobby. Nothing sounds like vinyl! 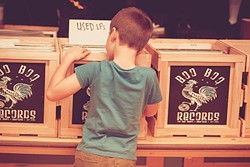 “Watching the children and their parents, friends, and neighbors, strangers making new friends, and the smiles on everyone’s faces just absolutely made the entire event; not to mention the loads of incredible vinyl to boot,” co-organizer Manuel Barba said of the last event. “We hope to continue growing this brand as well as expanding our vision over these next years, and have recently branched off into experimenting again with live shows. We’ll be bringing the 11-piece Afro funk orchestra known as Jungle Fire on Sunday, April 9, to Tap It Brewing, under the SLO Record Swap Presents moniker.”

If the forecast holds and the weather’s clear this Saturday, expect the beer garden to be up and running with brews from Libertine Brewing Co. and Central Coast Brewing, as well as food trucks! Kudos to Boo Boo Records, the event’s main sponsor, and SLO Record Swap for keeping the vinyl dream alive!