John Huffman is a winner!

John Huffman, a photographer, San Luis Obispo native, and onetime owner of Boo Boo Records, scored big time at the International Photography Awards this year. Huffman bagged five honorable mentions, two of them for his entry Pont Louis-Philippe, which was honored in the “Architecture—Bridges” and “Special—Night” categories. 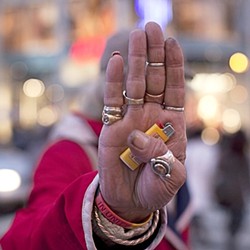 Huffman, who says his online business grants him the freedom to travel more often than most, took home awards in the “Fine Art—Landscape” category for his entry Big Sur Sunrise and “Nature—Seasons” category for Midwest Autumn. In the category “People—Other,” Huffman was also honored for his In Unity (pictured), shot in Toronto’s Dundas Square.

In Unity was taken in late November of last year, when Huffman spotted a “clearly disenfranchised” man in red, an incongruity before the backdrop of flashy advertising.

“He had an almost Santa Claus look to him,” Huffman recalled.

The photographer took several shots of the man before he raised his hand in protest, creating the winning image.

Huffman has been shooting since receiving his first camera at the age of 6. But he doesn’t do commercial photography, preferring to keep his passion out of his work.

After all, he said, “I owned Boo Boo’s for 20 years.” Selling, spinning, and talking about records all day, he added, took some of the fun out of listening to them at home.

A frequent traveler, Huffman will typically shoot 6,000 photos on one of his trips, hoping for that great one or two shots.

With his recent honors, Huffman is in the fine company of talented artists from all over the world: The International Photography Awards, which employs 70 jurors, received more than 8,000 submissions this year from 90 countries.