BarrelHouse Brewing Co. is located at 3055 Limestone Way, in southeast Paso Robles in the Tin City complex. It features free live music on Fridays and Saturdays during the spring and summer, as well as ticketed events in the new grass bowl venue. A food truck is on site daily, and a rotating selection of around 10 craft beers is on tap. Visit barrelhousebrewing.com for the food truck, live music, and event schedule. 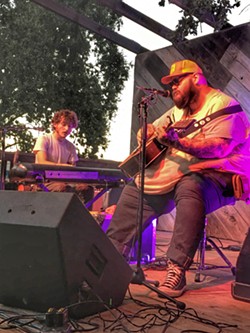 It's Sunday, Aug. 13, and I'm on my way to have my heart broken by singer-songwriter John Moreland, whose devastating songs always leave me joyously despondent. He'll be taking BarrelHouse Brewing Co.'s new grass bowl stage in about 90 minutes, but I arrived early to take a tour of this Paso Robles craft brewing operation. Well, that and to drink a few of their tasty barley pops.

Bar Manager Rustle Bedwell sits down with me as I sip on a light, refreshing Templeton Ale. He explains that tonight's show is just the third ticketed event for the new venue.

"Todd's really good at finding acts for us that fit our vibe," Bedwell explains, referring to Todd Newman of Good Medicine Presents, the promoter behind tonight's show. Their next collaboration will be The Brothers Comatose show on Oct. 4.

"We're kind of the local hangout," Bedwell says. "Most of our customers come back every week. It might be their Thursday night hangout or their Saturday night hangout. We get tourists, but the majority of our business is my regular local crowd, my people."

What BarrelHouse also has is a super comfortable family and dog friendly vibe. There's a cool waterfall, lots of indoor and outdoor games to play, a beautiful oak-dappled setting, and killer beer! Located in Tin City—a series of metal buildings in southeast Paso—BarrelHouse is surrounded by about a dozen wineries, a cider house, a distillery, and more on the way. Both a restaurant and ice cream shop are schedule to open nearby soon.

BarrelHouse's Good Times Manager Emily Robertson takes me on a tour of the facility, showing me the huge stainless steel tanks and bottling facility, pointing out three smaller tanks perched on a loft in the corner.

"Those three tanks are what owner Jason Carvalho started with when he was brewing beer in his garage," Robertson says.

Carvalho teamed with longtime friend Kevin Nickell to start BarrelHouse, which opened four years ago in Paso but now has a speakeasy in SLO Town and an even bigger brewing facility in Visalia. The pair has since added Chris Vaughn as a third partner.

Robertson mentions that the venue can host private events and that they're hosting a sour beer festival on Sept. 23, with 25 guest breweries participating.

After the tour, I grab another beer, Sunny Daze, and pull up a spot at a picnic table next to Good Medicine's Newman. 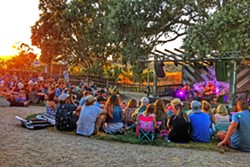 "What truly impresses me is the culture these guys have created here," Newman says. "It's family. As a business owner myself, I'm impressed by the intention behind creating this family friendly atmosphere."

Soon the grass bowl fills with people, as do the picnic tables. Some folks bring their own beach chairs. The opener, Christian Lee Hutson, takes to the stage like clockwork at 6:30 p.m. About 35 minutes later he finishes up, and John Moreland lumbers on stage at 7:30, settling in with his accompanist John Calvin Abney.

"If we don't bleed, it don't feel like a song," Moreland sings in his rumble of a voice that rolls over the crowd like distant thunder, breaking my heart right in two. Δ