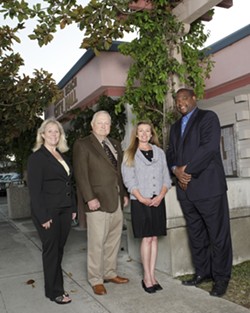 Longtime Grover Beach politico John Shoals will be running for the city's mayoral seat in the upcoming Nov. 4 general election.

Shoals was first elected as a council member in 2002, and stepped down (due to mayoral term limits) in 2012 after ten years of council service. Shoals served as Grover's mayor for a total of six years; in 2004, 2007, and 2008-2012. He has also been the Senior Governmental Relations Representative for Pacific Gas and Electric since 2009.

Shoals' competition for the mayoral seat will be the current mayor, Debbie Peterson, who announced her intent to run for reelection on July 7.

New Times attended the formal announcement and spoke with Shoals on July 14, so check for further details online and in the July 17 print issue of New Times.