Directed by Chad Stahelski (John Wick, John Wick: Chapter 2) and picking up mere hours after the second installment, this third in the series follows Wick's (Keanu Reeves) attempt to escape after a $14 million bounty is placed on his head for breaking an international assassins' guild rule and killing a member of the guild's upper order inside the off-limits Continental Hotel. Now every hit man and woman is after him. About the only killer tentatively on his side is Sofia (Halle Berry), who owes him a debt. (130 min.)

Glen For sheer mayhem, it's hard to top the John Wick franchise. Sure, films like Smokin' Aces (2006) and Shoot 'Em Up (2007) have over-the-top gun violence, but compared to the John Wick films, they come off as cartoonish. And yes, films like Ong-Bak: The Thai Warrior (2003) and The Raid: Redemption (2011) have comparable hand-to-hand combat scenes, but the fight choreography in the John Wick films is crazy good and features premiere Hollywood actors trained in the martial arts rather than martial artists trained as actors. This third installment in the series has everything you've come to expect—amazing martial arts; knife-and-sword fight scenes; close-quarters gunplay; vehicle (even horse) chases; and people who love their dogs more than anything. Director Stahelski was a martial artist first, martial arts instructor second, Hollywood stuntman third, and came to direction in 2014 with the first John Wick film. He knows how to create believable yet dazzling violence, and he ups the ante with some amazing sequences and settings—like a fight in what appears to be a knife museum; a horse stable using horses as weapons; an all-glass room; and a Casablanca compound with Berry's character, Sofia, and her two fierce Belgian Malinois dogs. The story is a bit thin. It's basically an escape film followed by an attack film, but if you like fantasy violence, you'll be hard-pressed to find a better franchise, and this may be the best film of the three.

Anna It's sparse on dialogue and huge on action—the John Wick series is nothing if not deliciously indulgent in that department. Wick appears to be on a mission of redemption, seeking out the head honcho of the High Table to revoke his excommunicado status and give him a chance to live. He's the unstoppable force the character has always been, but this installment is especially epic. Fight scenes are so crazy and so good, I was clenching my fists and laughing out loud at the same time. The film wastes no time getting John into the thick of it. When bounty hunter Ernest (Boban Marjanovic) hunts him down at the New York Library, Wick conquers the 7-foot-3 behemoth via a library book. It's ridiculous and fun. If you aren't a fan of indulgent violence, I doubt any film in this series would appeal. As someone who is pretty picky about action flicks, I take a hard pass on a lot of films that seem to be all fluff and no story. John Wick: Chapter 3–Parabellum has some story to it, but I almost don't even care. The stunts are so off-the-hook crazy good, I'm watching for the next fight scene no matter what else is going on. The film ends with an inevitable setup for the next in the franchise, and I for one say bring it on, John! 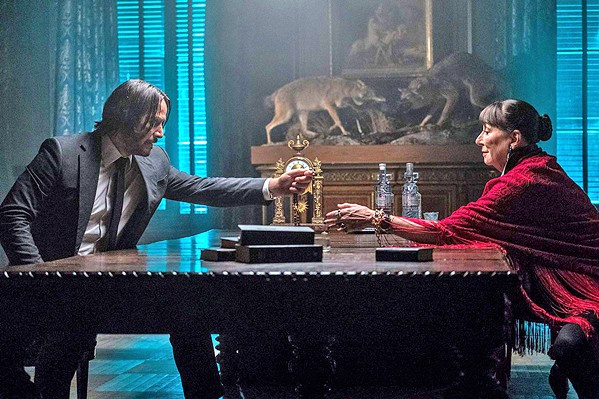 Glen Perhaps the hardest element for my disbelief to overcome is the crazy-kooky world of the international assassins' guild, with exclusive, assassin-friendly Continental Hotels in major cities and elaborate rules set by the High Table regarding blood pacts and markers and who's allowed to kill whom and where. It's an attempt to bring some semblance of honor to the proceedings. Even after Wick is made excommunicado, he's still able to call in his marker with The Director (Angelica Huston), who runs a Belarussian ballet and wrestling school, where Wick was apparently trained. There are also questions of loyalty between New York Continental Hotel manager Winston (Ian McShane) and his concierge, Charon (Lance Reddick), who allowed Wick an hour's head start and are now under scrutiny by The Adjudicator (Asia Kate Dillon), who the High Table sent to mete out justice. The Adjudicator also visits The Director and the Bowery King (Laurence Fishburne), who runs a group of "homeless" street thugs and who she also deems guilty of helping Wick by not killing him on sight when they had the chance. The High Table's assassin is Zero (Mark Dacascos), a samurai-esque martial arts master with a legion of ninja-like students. Part of the story's humor is Zero's fawning flattery of Wick, who's regarded as the best assassin. Zero desperately wants Wick's approval, even though he's trying to kill him. All these competing factions are setups for the inevitable fourth installment, where director Stahelski will have to take another crack at topping the over-the-top action of the first three films. Can he do it? I will be in the audience to find out.

Anna Zero is a pretty fun character—he's so entranced by Wick's skill that he thinks of himself and his target as one and the same. The guy has some skills to be sure, but one thing we know about Wick going in is that he can't be bested. Beaten, bloodied, and worse for wear? Sure, but he's always the one walking away from the fight. Every battle is over-the-top—weaving together long shots and close-up combat—and unyieldingly intense. The final battle takes place in the Continental Hotel against agents shielded in armor that typical weapons can't penetrate. Luckily, Winston has an arsenal of guns for Wick and Charon to choose from, waging battle while The Adjudicator sits upstairs and rethinks her strategy. The whole High Table world with its hard-and-fast rules and consequences was a bit tough for me to follow or understand in detail, but luckily not tons of time is spent trying to establish that reality. Storyline is the means to an end in this flick, and I don't mind it. Chances are if you enjoyed the previous films in this series, you've already got plans to see this one. Do it in a theater where the ass kicking is as big as it can get. Δ