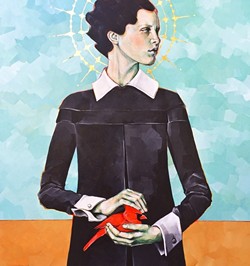 Out with the old, in with the new,” the tired maxim goes. This may work for your common, everyday items like a rusty sink or a withered, jaundiced liver, but not for art. For eight years, the Johnson Gallery House has been on a hiatus, but come this August’s Art After Dark in SLO, that will change. Five artists, including Lena Rushing, Ellen Jewett, Peg Grady, Josephine Crawford, and Lindsay Kovacevich, will have a diverse series of original works on display for the gallery’s eclectic Summer Pop Up Show.

So, why now? Why return after eight years, instead of going for the full, tin anniversary? According to Ellen Jewett, she was just at gallery owner Gail Johnson’s house, looking at some new pieces, when the idea popped up, so to speak.

“We were looking at my new work, and Gail looks me straight in the eye and says, ‘Ellen, I’d like you to have a show,’ and I almost you-know-what!,” Jewett recalled.

Immediately, Jewett called some of her artist friends and, much like the Avengers, they assembled. The exhibit will contain both old and new pieces from each of the five artists. Lena Rushing, in particular, will showcase three of her female narrative portraits. Two of these have been featured in exhibits at Paso Robles’ Studios on the Park before, but her latest addition, Cardinal, was only finished a couple of weeks ago. Against radiant blocks of acrylic blues and oranges, Rushing renders an imposing feminine figure, tenderly clutching a cardinal. Almost in the style of Byzantine saint portraits, the woman’s head is encircled in a gold-leaf halo, and like most of Rushing’s work, the bold colors and stately pose of the central figure convey an air of feminine strength—a theme that underscores Jewett’s pieces as well.

Painted with oil on plexiglass, Jewett’s pieces contain surreal images of what the artists describes as “wolf women.” One of her images, Flinging Her Skirt, depicts a brazen wolf woman, dressed in lurid pinks and licking her tongue. It’s bizarre, provocative, and unabashedly different, much like many of the works to be featured in the Pop Up Show.

On the same night, across town, a new art space will be opening its doors to the public for the first time. Developed and owned by Carla Wingett and Karen Irwin, Huckleberry Market seems to be a catchall for anything creative and community-oriented. They’re a floral and gift shop, an event supply market, a place for the DIY wedding planner, and a workshop space for resident artists to practice their trade and occasionally teach.

“We just love crafting, decorative things for weddings, and the wedding industry is so big, we just want brides to feel free to get creative and have a space,” Wingett said over the phone.

As part of their grand opening, Huckleberry Market will be featuring a new series of paintings by local art savage, Neal Breton. This isn’t the first time Breton has worked with Wingett. The former owner of SLO Art Supply used to sling Dutch modern furniture at another of Wingett’s businesses, the now-closed Brick House Goods.

“It was one of the coolest retail jobs I’ve ever had,” Breton said. “I liked working at Brick House Goods better than working at my store, so it’s nice to be working with Carla again. I’m exploring something I haven’t done yet, something more on the commercial illustration side. I’ll definitely be working my cute muscle getting some experience with wedding invitations.”

Breton’s new series of paintings may not quite be cute exactly, but they are certainly toned down. In stark contrast to the dynamic and vivid fox paintings he showcased at Studios on the Park last year, Breton’s latest series focuses on the calm and stationary serenity of summer recreation. With gouache, spray paint, and acrylics, he exhibits the relaxed, unpopulated atmosphere of hotel pools and tennis courts. Painted in basic, geometric blocks of green, blue, and yellow, they are refreshingly simple and accessible in a way that speaks to the do-it-yourself ethos of Huckleberry Market.

“It’s not just another store,” Breton said. “We’re trying to pay the bills, but we’re also trying to bring something cool to a different section of town. We want people to be empowered by what we can do for them and by what they can do.”

Jessica Peña turns into a wolf woman every new moon. Feel free to howl at her at jpena@newtimesslo.com.