Writer-director Tailka Waititi (Hunt for the Wilderpeople, What We Do in the Shadows) helms this adaptation of Christine Leunens' satirical novel about a young boy (Roman Griffin Davis) in Hitler's (Waititi) army who discovers his mother (Scarlett Johansson) is hiding a Jewish girl (Thomasin McKenzie) in their home. (108 min.) 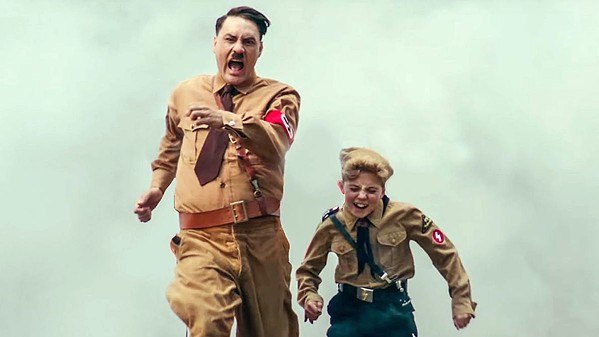 Glen I was really looking forward to this one and, sure enough, it's hilarious and heartbreaking. Waititi seems to have copied a page out of Wes Anderson's (The Royal Tenenbaums, Moonrise Kingdom) director's handbook, creating a colorful, comical, absurdist world and a look at one young fanatic's coming-of-age story. Jojo wants desperately to fit in, and we meet him on the day he's going to begin his Hitler Youth training. His father is away "fighting the war," so he lives alone with his loving mother, Rosie. His only real friend is pudgy Yorki (Archie Yates), who's also beginning his training. To work things out in his head, lonely Jojo has created an imaginary friend, Adolf Hitler, who appears whenever Jojo needs him to help psych him up and meet the challenges of his life. The film's interested in how someone can become a Nazi, and in Jojo's case, it was easy—he's been indoctrinated by anti-Semitic rhetoric his whole life, buying in to the dehumanization and scapegoating of "the other." If you're wondering if Waititi is drawing parallels to the present with this look at the past, it seems certain. The Nazis are depicted as supercilious buffoons for the most part—cruel, petty, and mean. Jojo wants to be a good Nazi, but he's cursed with a conscience. He gets his nickname Jojo Rabbit when he can't bring himself to wring a rabbit's neck as part of his training. When he eventually discovers Elsa, the Jewish girl his mother is hiding, his black-and-white Nazi world is suddenly complicated with shades of gray. What follows is his slow—painfully slow!—awakening. It's a very tender and sweet film that will have you howling with laughter and wiping away tears. I loved it!

Anna This film has been on our radar for months. The all-star cast and satiric storyline had big promise, and, boy, did it deliver. This isn't New Zealand director Waititi's first hit—What We Do In The Shadows was almost criminally hilarious, and Hunt for the Wilderpeople was a touching and funny triumph. In my book, he can do no wrong, and Jojo Rabbit is another testament to his brand of accessible humor. It's silly and absurd, yet poignant and touching. Davis is a gem as young Jojo—a boy so sure of his convictions yet still young and vulnerable. He's getting his first taste of uncertainty when he stumbles upon Elsa, a girl he is forced to hate by his convictions, but he soon warms, albeit reluctantly, to her. Could it be that the horned, demon-spawned Jews that his mentors have always described are actually nice, normal people? A friend even? Could he actually be in love with the enemy he has always known? Jojo's world is upside down and inside out, that's for sure. I can't sing enough praise for Davis—this kid is expressive and sharp, a force to be reckoned with in the coming years. With a supporting cast of director Waititi himself, Johansson, Rebel Wilson, and Rockwell, this film is an absolute joy. This is one I will watch over and over again without hesitation.

Glen Rockwell's character, Capt. Klenzendorf, is a real standout. He's a very complicated Nazi, one who dreams of glory on the front lines but who through his own lazy ineptitude keeps finding himself demoted to more and more embarrassing positions. He's a closeted gay, uncommitted to anti-Semitism, but a loyal and brave Nazi all the same. Klenzendorf is the kind of morally compromised but generally good-hearted character Rockwell is great at playing. I also thought Yates as Yorki was wonderful. His character, like Jojo, is earnest and loyal but also too sweet to be an effective Nazi. Wilson as Fraulein Rahm also delivered a lot of comic gold. It's both funny and horrifying to see how Waititi depicts Hitler's army during its death knell, willing to clothe children in paper uniforms, arm them, and expect them to fight to the death as the Allied invasion tightened its noose around Germany. Sorry to inject some politics in this, but I couldn't help but think about the recent White House Halloween celebration, where children were invited to write their names on construction paper "bricks" and stick them to a wall decorated with the words, "BUILD THE WALL." Regimes indoctrinate children through play, just like Jojo and Yorki have fun playing as soldiers in the Hitler Youth, dressed in their spiffy uniforms and with their special Nazi knives. Jojo Rabbit and its irreverent examination of Nazi Germany has a lot to say about our world today, but Waititi is such a hopeful filmmaker, and the film's ultimate message is that good will triumph over evil. Let's hope so!

Anna It isn't all fun and jokes—this film packs emotional heat as well. Jojo and his mother are super close, so the realization that she's a traitor to the Nazi Party is a big gut punch to her young son. He can't let her know that he knows about her Jewish stowaway, but he still tries to find ways to get the message across that he's unhappy with her. He finds himself keen on spending more and more time with Elsa under the guise of writing a book on how to spot a Jew. He looks up to Klenzendorf as a mentor, a grown-up who will actually give him straight answers. It's all sweet and yet terribly sad when you stop and think about the circumstances. I too loved little Yorki—the two boys lit up like Christmas trees every time they spotted each other, even in the middle of an invasion. I hope to see more from both of them. Waititi is great comic relief as imaginary Hitler, whose jealous side comes out as Jojo spends more time with Elsa. The two used to do everything together, but Jojo is growing up and doesn't need Adolf as a friend anymore. Watching Waititi as a flustered and funny Hitler is a lot of fun. I highly recommend catching this one in theaters; it ranks as a must-see movie in my book! Δ