Photos Courtesy Of Chloe Fertel BEHIND GLASS French pastries such as fruit tartlets and pastry chef Chloe Fertel's twist on commercial cookie classics, such as Nutter Butters and Oreos, wait for hungry mouths at Joliene Bakery.

Treat yourself to Joliene Bakery in downtown SLO's Creamery Marketplace at 570 Higuera St., Wednesday through Sunday from 8 a.m. to 2 p.m. Call (805) 439-3373, visit jolienebakery.com, or find the shop on Instagram and Facebook @jolienebakery for more information on what's baking.

Light streamed through a wall of windows on a chilly Monday morning, brightening up Joliene Bakery and hitting the folds of tiny orange and pink rose-printed fabric that covered Chloe Fertel's nose and mouth.

The roses dance as she talks about the dream that she and her husband made a reality more than a year ago. Modeled after sweet memories of a French bakery in Santa Cruz, Fertel said she wanted to create a beautiful, bright place that looked amazing and smelled amazing.

Growing up on the Westside of Santa Cruz, she played soccer, played in symphonies and orchestras, and baked. She joked that as a kid, she was food-obsessed. Always baking, always engaged in learning more about food.

After concerts or games on the weekend, her dad, who was a professor at UC Santa Cruz, would always take her to Kelly's French Bakery for a treat.

"It was always the highlight of my week," Fertel said. "It was just my happy place ... . To me, that was just the type of place that I wanted to spend time in and perpetuate."

Given the right time, the right place, Fertel said, she would go for it.

She attended the Culinary Institute of America in St. Helena, graduating with a degree in baking and pastry arts. She worked at Bay Area landmarks such as One Market Restaurant in San Francisco and was the pastry chef for Silver Oak, which has a handful of properties in the Napa/Sonoma area. Silver Oak was where she honed her bread baking skills.

Fertel would bake bread using grapes to make the starter, which enables bread to rise. Bread starter is a SCOBY (symbiotic culture of bacteria and yeast), Fertel said, a culture of wild yeast cohabitating in flour and water.

"The world is just populated with yeast and bacteria, and all kinds of yeast can give you really great flavors," she said. 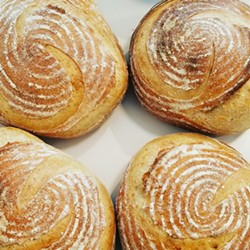 Grapes have natural sugar as well as yeast and natural bacteria living on the surface. So she would mash up some grapes, let that sit, and use it to leaven the breads. She would also try to incorporate the fruit in other ways, using wine to make a Bordeaux marble rye bread or grapes to create a crust on the outside of her loaves.

"It was a lot of fun to play around with just grapes in general, bringing food and wine to a whole other level, if you will," she said.

She met her husband, Thomas Fertel, in Napa. He was a winemaker. She worked in fine dining. It was a lot of long hours and late nights, but it was fun. When they had time off, sometimes they would travel to San Luis Obispo, where Thomas had gone to Cal Poly, and visit friends. They moved to the area in January 2017 after he got a job offer at Wild Horse Winery in Paso Robles. 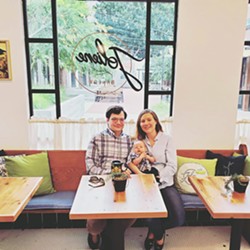 Eventually, a spot in The Creamery Marketplace opened up, and they decided to go for it. What was once a clothing store and dance studio is now a commercial kitchen and bakery producing delicate, delicious French baked goods—fun things like choux pastries and macarons; staples like baguettes; and savory or sweet delectables like croque-monsieurs and pain au chocolates.

Let's talk about that pain au chocolate. Fertel said she wanted to make a pastry with more than just a sliver of chocolate smack in the middle of all that dough. So she spreads a homemade ganache all over the dough before wrapping it up into the croissant it will eventually become. That way, there's chocolate folded between the fluffy, buttery layers of the pastry.

And if you really think about it, that should be the only way they're made.

You can also get breakfast and lunch sandwiches, pies, cakes, and fresh baked English muffins. Princess tortes, eclairs, and tartines. Along with a coffee, espresso, or café au lait while you have a seat out on the patio overlooking the Creamery courtyard.

And fluffy. They keep it fluffy with their crusty loaves of perfectly seasoned and leavened bread. Fertel said her Meyer lemon and herb bread is really popular. A sourdough bread with Meyer lemon zest and fresh herbs, she said it pairs really well with the Mediterranean influence on California cooking.

"When I think about bread, I'm always thinking about what people are cooking right now and what would pair with it," Fertel said.

Plus, every bread she bakes has a little bit of Luis in it.

That's what she calls her local SCOBY, made with yeast collected from the coast. Avila Beach was home when they first moved here. So she took a bowl of flour and water, put a little layer of cheese cloth on top, and let it sit outside for a couple of days. The yeast and bacteria in the air did their thing, and when the beast bubbled, she knew it was ready.

Luis has been going strong ever since. You can train a SCOBY to know when to expect food, kind of like a little bit of supply and demand.

"We feed our starter every week, usually at the beginning of the week, and just kind of control it throughout the week so it doesn't overferment," she said.

Although the couple celebrated their first year of business at the beginning of the summer, it's been a tough year. After they had their son, Thomas shifted full-time to the bakery in January so they could juggle family life and the bakery together. Then COVID-19 really shook things up. They initially lost employees, who were mostly Cal Poly students, because they moved back home in March due to shelter-in-place orders. So Fertel and her husbad basically did it all.

Joliene Bakery moved to a pre-order pickup system. Fertel would prep Monday through Friday, come in at midnight on Saturday and bake until 7 a.m. She would go home to be with her son, and Thomas would come in and pack up all the orders. Then they had to rehire and retrain employees as the economy sort of opened back up.

Back to being open five days a week, Fertel said they're just keeping an eye on COVID-19 regulations, cleanliness, and best practices. And she's looking forward to the holidays and the upcoming menu shift at the bakery: a new wave of French items, festive holiday pies, and potentially bûche de noël (yule log) and panettone for Christmas.

There might even be a gigantic gingerbread structure on display. Whatever she puts out there, though, the goal is to put a smile on a customer's face.

"For us, at the end of the day, what makes us happy isn't necessarily what's in our bank account. It's the people," Fertel said. "It's just making a happy place for people, just like the place that I loved when I was a kid, and passing on that joy to others." Δ